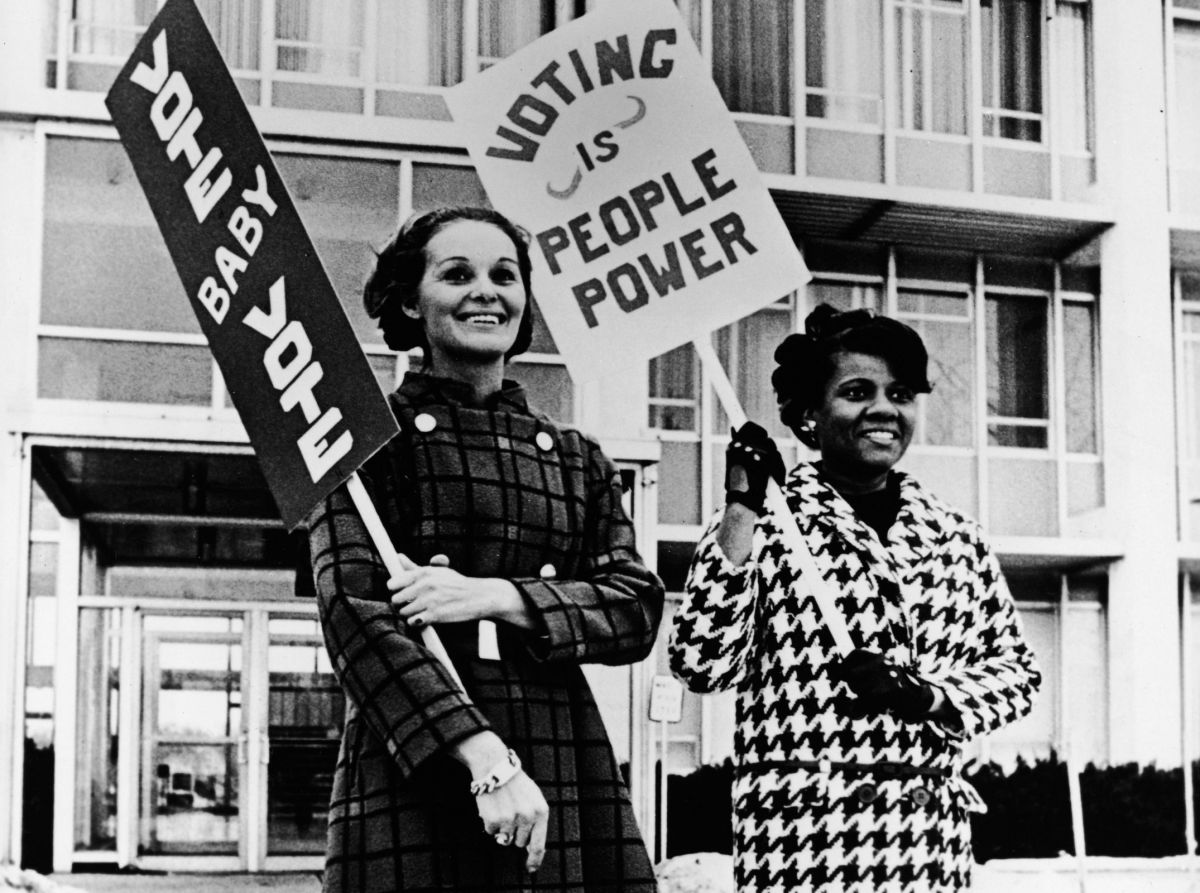 Two smiling women stand outdoors and hold signs reading “Vote Baby Vote” and “Voting is People Power,” c. 1970. (Photo by Gabriel Hackett /Getty Images)March 25, 2021
There is only one story today.
It is not the coronavirus pandemic, although 547,000 of us have died of Covid-19, and a study today suggested that we could have avoided nearly 400,000 deaths if we had adopted masks and social distancing early on. It is not the coronavirus even though today President Joe Biden noted that we will reach 100 million vaccinations tomorrow and that he aims to reach 200 million vaccines by his 100th day in office….
It is not the situation on our southern border, where a surge of migrants apparently matches the seasonal pattern of people trying to make it into the United States….

It is not the economy, although the US Treasury said today it had issued 37 million payments this week, worth $83 billion, from the $1.9 trillion American Rescue Plan….
The story today — and always — is the story of American democracy.
Tonight, Governor Brian Kemp of Georgia signed a 95-page law designed to suppress the vote in the state where voters chose two Democratic senators in 2020, making it possible for Democrats to enact their agenda. Among other things, the new law strips power from the Republican secretary of state who stood up to Trump’s demand that he change the 2020 voting results. The law also makes it a crime to give water or food to people waiting in line to vote.
The Georgia law is eye-popping, but it is only one of more than 250 measures in 43 states designed to keep Republicans in power no matter what voters want.
This is the only story from today because it is the only story historians will note from this era: Did Americans defend their democracy or did they fall to oligarchy?
The answer to this question right now depends on the Senate filibuster. Democrats are trying to fight state laws suppressing the vote with a federal law called the For the People Act, which protects voting, ends partisan gerrymandering, and keeps dark money out of elections.
The For the People Act, passed by the House of Representatives, is now going to the Senate. There, Republicans will try to kill it with the filibuster, which enables an entrenched minority to stop popular legislation by threatening to hold the floor talking so that the Senate cannot vote. If Republicans block this measure, the extraordinary state laws designed to guarantee that Democrats can never win another election will stay in effect, and America as a whole will look much like the Jim Crow South, with democracy replaced by a one-party state.
Democrats are talking about reforming the filibuster to keep Republicans from blocking the For the People Act.
They have been reluctant to get rid of the filibuster, but today President Joe Biden suggested he would be open to changing the rule that permits Republicans to stop legislation by simply indicating opposition. Republicans are abusing the filibuster, he says, and he indicated he would be open to its reform.
The story today is not about coronavirus vaccines, or border solutions, or economic recovery, because all of those things depended on the election of Joe Biden. If the Republicans get their way, no matter how popular Democrats are, they will never again get to direct the government.
We are pleased to be presenting daily posts from Heather Cox Richardson’s “Letters From an American” email newsletter. You can sign up to receive it in your inbox here.