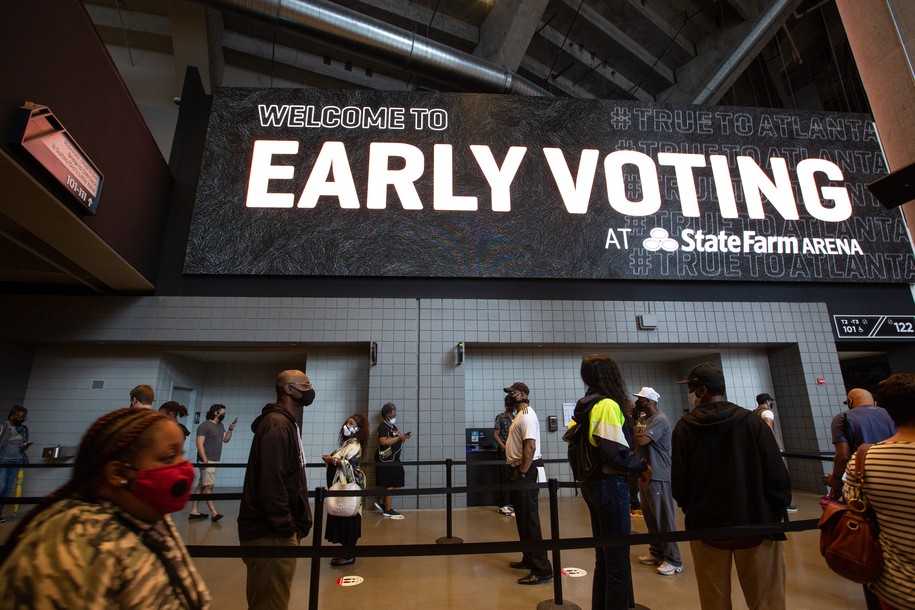 Right now, the Republican legislatures in at least eight states controlled by their party are trying to seize complete control of the election process, over civil servants, judges, and county officials. Georgia is ground zero. “It’s looking at total control of the election process by elected officials, which is not what it should be,” Helen Butler, a Democratic county board of elections member told The New York Times. “It’s all about turnout and trying to retain power.” Iowa’s Republicans have made enacting emergency voting rules a criminal offense and Arizona’s Republicans are trying to take over the conduct of the state’s elections. They don’t want a repeat of 2020, when massive voter turnout gave Democrats the White House and Senate and mobilized millions of new voters. At this point, democracy is truly in jeopardy and Republicans will stop at absolutely nothing to finish it off.

Congress has to stop them. That’s all there is to it. With Joe Biden in the White House and Democrats in control of the House and Senate, that is at least technically doable. But then there’s Sen. Joe Manchin who keeps moving the governance goal posts. His latest demand is insisting that no voting rights legislation can pass without bipartisan support.  He says that to be accepted as legitimate by voters, it has to be bipartisan. Which is utter bullshit for the majority of voters. The only voters who would have a problem with voting rights being extended to every eligible person are the white Republicans who feel the franchise should be limited to themselves and who have been hellbent on trying to effect that for at least a couple of decades. So when the nation’s Black leaders single out the Democrats, like Manchin, who are holding out against filibuster reform, they are standing on solid ground.

Black civil rights leaders, voting rights advocates, elected officials are coming together in a pressure campaign to get Senate Democrats to break the filibuster, if not for all legislation at least for civil and voting rights bills. Rev. Al Sharpton told Politico that a coalition of leaders is planning town halls and rallies in the home states of Democratic holdouts—namely West Virginia’s Manchin and Arizona’s Kyrsten Sinema—to lobby for their support in stopping the Republican war on voting.

They’re not going to pull any punches. “The pressure that we are going to put on Sinema and Manchin is calling [the filibuster] racist and saying that they are, in effect, supporting racism,” Sharpton said. “Why would they be wedded to something that has those results? Their voters need to know that.”

There’s an implied future threat in that—the next election. “Many of us and certainly all of us in the civil rights leadership are committed to policies and laws and causes, not to people’s political careers. We’re not into that. We want to change the country,” Sharpton said. “And if there is not feasible evidence that we’re doing that, it is not in our concern to be aggressively involved.”

Color of Change President Rashad Robinson is equally done with supporting Democratic politicians who don’t support people of color. “What do they expect me to say if we can’t get anything passed? Do they want me to go out and explain to people [what] the filibuster [is]?” Robinson said. “[Voters aren’t] going to want to hear about the filibuster. They’re not going to hear about bipartisanship. They’re going to hear about how you fought back in the face of the barriers that were put in the way.”

North Carolina’s Rev. William Barber, leader of the “Moral Monday” protests, agrees and points to the larger issues of structural racism in the country, beyond voting rights, that the filibuster is buttressing. “I said that to the Biden administration and said it to the Democrats, you cannot be serious about dealing with racism, and then you don’t get living wages done. And you’re never gonna get living wages done […] and health care if you don’t push and fight against voter suppression,” Barber told Politico, saying that voting rights and economic empowerment are “inextricably bound together.” And if you aren’t going to support getting rid of the filibuster, “Don’t tell me you love John Lewis. John Lewis wanted living wages, and he wanted voting rights.”

Georgia Democrat Stacey Abrams is looking for the most politically expedient way of doing this, one that for now Manchin is ruling out. “I fundamentally believe that Congress alone has the ability to create a unified threshold for democracy in our country,” Abrams told Politico. “I believe there needs to be a carve-out, an exemption, a suspension of the filibuster.” Fundamental issues of democracy—like nominations, including for the Supreme Court, and budget reconciliation—should be exempt from the filibuster, she argues. “This is not new,” she said. “I believe that there is both exigency and there is a precedent for creating this [filibuster] carve-out in order to protect democracy.”

“There are many paths that are possible here,” he continued, “and as a group of 50, we have to figure it out—and we must figure it out. We have a constitutional responsibility; we took an oath.” Merkley pointed to the fact that Republicans play fast and loose with rules all the time, like in 2011 when they changed the rules for using budget reconciliation. That allowed them to make tax cuts that increase deficits but banned reconciliation bills that would produce an increase in spending on mandatory spending—Medicare, Medicaid, food stamps, farm programs, or other entitlements. That was the budget reconciliation rule they used to pass the 2017 Trump tax scam.

If the rules can be changed to cut taxes for the super rich, surely they could be used to save democracy, Merkley and Abrams are arguing. It’s hard to see even Manchin disagreeing with that one. He really does need to spend some time with the Reverend Sen. Raphael Warnock, and in listening to that remarkable maiden floor speech and it’s basic truths: “The right to vote is preservative of all other rights, it is not just another issue alongside other issues, it is foundational,” Warnock explained. “Surely there ought to be at least 60 in this chamber who believe as I do that the four most powerful words uttered in a democracy are ‘The people have spoken.'”

It doesn’t have to be 60, though that would be nice. It won’t be 60, because that’s not what Republicans, at least not the ones in the Senate, believe. They haven’t since well before Alberto Gonzales made the war on voting official Republican policy.