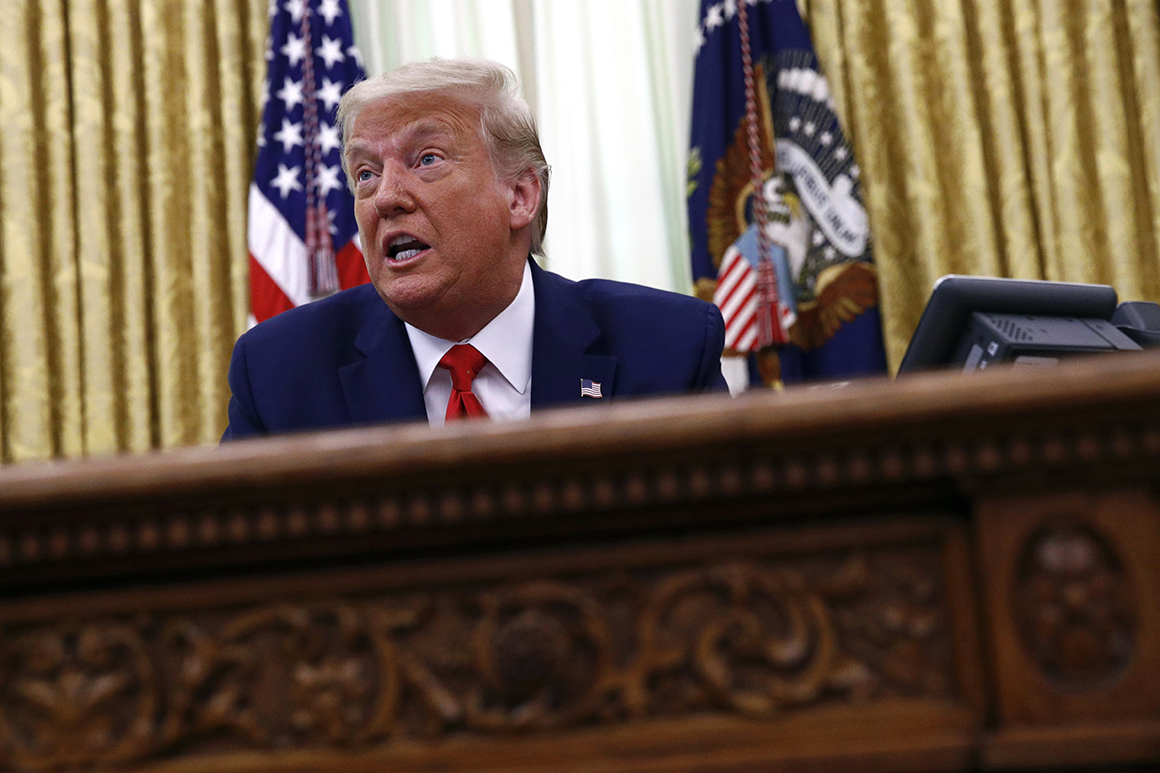 In events and media appearances over the past several weeks, the White House and administration officials have repeatedly insisted that the nation’s schools and colleges must physically reopen classes — and that online instruction, fully or partially, isn’t an appropriate alternative. They’ve threatened to use federal funding as a lever to prod schools into physically reopening.
The Trump administration has been clear that it’s concerned that schools remaining closed would be a drag on the economic recovery that the president is banking on ahead of the November election. “If we don’t reopen the schools that would be a setback to a true economic recovery,” Larry Kudlow, Trump’s top economic adviser said this week.
Trump blasted Los Angeles school officials earlier this week for a “terrible decision” to keep the nation’s second-largest school district online-only when classes start in several weeks. Many other large school districts across the country are also defying Trump’s demands to physically reopen.
“It’s not a matter of if schools should reopen, it’s simply a matter of how,” DeVos has repeated several times in recent weeks as she’s become a main spokesperson for the Trump administration’s push to reopen schools. Schools, she has said, “must fully open and they must be fully operational.”
But the Trump administration’s focus on in-person instruction in traditional school buildings is a stark change for DeVos, who has long been an ardent proponent of virtual schools and individualized digital learning options for students.
As secretary of Education, she has also taken action to promote online instruction in both K-12 schools and higher education, steering money and grants toward digital learning options and scaling back federal regulations in order to promote distance education.

DeVos last year traveled the country on a “Rethink Education” tour in which she repeatedly called for education leaders to question longtime assumptions about what K-12 and higher education looks like — which she noted hasn’t changed much in several centuries.
“It’s past time to ask some of the questions that often get labeled as ‘non-negotiable’ or just don’t get asked at all,” DeVos said during a 2018 speech. Among them: “Why do students have to go to a school building in the first place?”
DeVos also touted “high-quality virtual charter schools” as “valuable” option during her confirmation process. She and her husband previously were investors in K12 Inc., one of the nation’s largest virtual school companies.
Kevin Chavous, the longtime Democratic education reformer who previously served on the board of DeVos’ school choice advocacy organization, the American Federation for Children, is now a top executive at K12.
“The administration has generally been supportive of parent choice,” Chavous said, but he acknowledged that message “feels more scrambled when you try to truncate the choice options into an either/or decision” between fully online and brick-and-mortar options.
“School districts can find a way to open by finding fully online options in a thought-out way or blended options depending on the status of the virus in their jurisdiction,” he said. “We should really be tailoring our approach in a solutions way instead of having some political conversation.”
“Emergency online or remote learning as its been administered by some school districts isn’t the same as online schools administered by people who know what they’re doing,” he said.
Chavous said K12 Inc. has seen “unprecedented” interest from school districts and parents since the start of the pandemic, adding that the company is looking to hire 1,300 new teachers.
John Bailey, who served as a White House domestic policy adviser to President George W. Bush, said there is a puzzling disconnect between Trump’s criticism of schools opting for online education and his Education Department’s previous celebration of local choices.
“I can’t make sense of it because it just shows an utterly dysfunctional federal government,” said Bailey, who is also a fellow at the Chan Zuckerberg Initiative and the American Enterprise Institute. He said the Trump administration’s criticism of online education in recent days has been a “distraction” for schools that have just several weeks left to plan for the fall.
As coronavirus cases soar in many parts of the country, Bailey said he expected that most schools will adopt some type of mix of online and in-person instruction this fall.
“Everyone knows online learning was not great for a lot of teachers and students and in the spring,” he said. “The focus now needs to be on how we provide the best hybrid learning and online learning — not debating, ‘Should the school be open five days a week or not?’”
As an example, Bailey said, a major problem this spring was how little time teachers and students interacted through online platforms. He cited Census data showing that virtual instruction in American households averaged just a handful of hours each week. “We should be incentivizing more instructional time, not reopening schools,” he said.

In higher education, too, DeVos has spent most of her time in office seeking to advance online education as an innovative way to bring college costs down.
DeVos’ new proposed regulation on online learning in higher education — which was unveiled in the midst of the pandemic but had been in the works for more than a year before — would make it easier for online colleges to access federal student aid.
“It’s pretty clear that the rhetoric we’re hearing right now is entirely politically motivated because of how inconsistent it is with what the administration has been doing,” said Clare McCann, deputy director for federal higher education policy at New America.
McCann, who also worked at the Obama Education Department, has been critical of the Trump administration’s deregulatory approach to online learning — as have other critics and consumer advocacy groups, who argue that there are too few federal guardrails for quality in the programs.
Those critics see irony in Trump’s sudden criticism on the quality of distance learning as he’s rushing to reopen schools. “There’s no doubt that online education is really hard to do right,” McCann said. “At the same time, quality has not a big concern from this administration when it comes to online education.”
Beyond seeking to change regulations, DeVos also threw a lifeline to one of the nation’s most prominent online schools, Western Governors University, in rejecting an inspector general’s finding that the school ran afoul of federal law governing how much and how frequently instructors and students must interact to qualify for student aid. The final online regulations DeVos finalized also eases that requirement of “regular and substantive” interaction between instructors and students going forward.
In March, the Education Department also used emergency powers to loosen the rules for how accreditors could approve online learning in higher education — telling colleges they didn’t necessarily need to adopt elaborate online learning platforms to win approval.
During a discussion about reopening schools at Louisiana State University this week, DeVos struck a more careful tone on the role of the online learning that Trump has slammed as inadequate.
“While distance learning works well for some kids, it doesn’t work well for others,” DeVos said during a roundtable discussion with Vice President Mike Pence. “That’s why I’ve always believed that education needs to meet the needs of students, not the other way around.”
Angela Morabito, a department spokesperson, emphasized that DeVos wants schools to be fully reopened in the fall but acknowledges that “there may be some exceptions to the rule depending on the local health situation.”
DeVos is focused on getting schools to provide “a full academic year of learning” that respects each student’s unique circumstances, she said. “All hybrid plans are not created equal.”