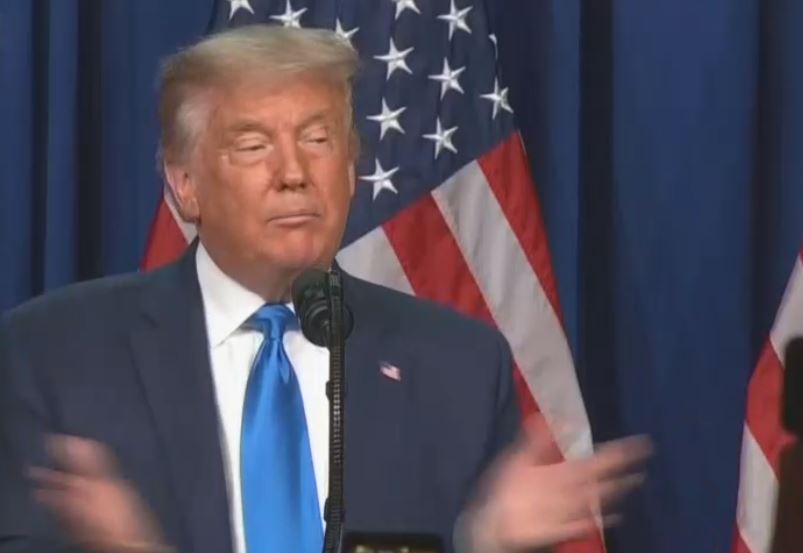 Trump couldn’t keep it together for five minutes while accepting the Republican nomination as he claimed that Democrats are stealing the election.
Trump said:
Because we caught them doing some really bad things in 2016. Let’s see what happens. We caught them doing some really bad things. We have to be careful because trying it again with this whole 80 million mail-in ballots that they’re working on. Sending them out to people that didn’t ask for them. They didn’t ask. They just get them. And it’s not fair and it is not right and it is not going to be possible to tabulate in my opinion. It’s just my opinion.

We have to be very, very careful and you have to watch, every one of you, you have to watch because bad things happened last time with the spying on our campaign and that goes to Biden and that goes to Obama. And we have to be very, very careful, and this time they’re trying to do it with a whole post office scam. They’ll blame it on the post office. You can see them sending it up. Be careful and watch it carefully because we have to win. This is the most important election in the history of our country. This is the most — do you know — for a long period of time, I would say, well, 2016, how special was that evening? Was that one of the great –that was one of the great evenings but we have to be very, very careful and we have to win. Our country is counting on it. This is the biggest. The country can go in a horrible, horrible direction or even a better direction
Video:

Trump accepts the Republican nomination then starts claiming that mail-in voting is a scam and Democrats are trying to steal the election. pic.twitter.com/ArV51tuSrp
— PoliticusUSA (@politicususa) August 24, 2020

In one minute and forty-one seconds, Trump claimed that mail-in voting is a scam, Biden and Obama spied on his campaign, and Democrats are trying to steal the election in 2016 and are doing it again by protecting voting rights.
None of what Trump has said is true.

Trump isn’t laying out a policy agenda. He is working hard to delegitimize the election result.
The craziness has begun, and Trump’s unhinged convention could be the final piece that makes him a one-term president.
For more discussion about this story join our Rachel Maddow and MSNBC group.
Follow Jason Easley on Facebook
Mr. Easley is the founder/managing editor and Senior White House and Congressional correspondent for PoliticusUSA. Jason has a Bachelor’s Degree in Political Science. His graduate work focused on public policy, with a specialization in social reform movements.
Awards and  Professional Memberships
Member of the Society of Professional Journalists and The American Political Science Association