Robert F. Williams is arguable one key historical figure whose rightful place in American history has been ignored. Rob was truly a man ahead of his time. The emergence of the revolutionary black nationalist wing of the black liberation movement and the subsequent rise of the Black Power Movement can be traced directly to efforts by young African American activists to create conditions in the 1960s favorable to bring Robert Williams back into the US. Williams had been forced out of the US and into exile as a result of his leadership of the Black community in Monroe, North Carolina, in armed self-defense and resistance to the KKK.

Robert F Williams was the forefather of the Black Power movement and broke dramatic new ground by internationalizing the African American struggle. Negroes with Guns is not only an electrifying look at an historically erased leader, but also provides a thought-provoking examination of Black radicalism and resistance and serves as a launching pad for the study of Black liberation philosophies. Read more at http://newsreel.org/video/NEGROES-WITH-GUNS

Not widely written about is Williams’ association with the Revolutionary Action Movement, also known as RAM. Williams served as international chairman of  RAM, a key force in the formation and national expansion across the US of the Black Panther Party. What was unique about RAM is that it was an underground or clandestine organization.  It infiltrated CORE, SNCC and other civil rights organizations.

The Revolutionary Action Movement (RAM) was the only secular political organization that Malcolm X joined before his fateful trip to Mecca in 1964. Early in 1963, Malcolm took the young Philadelphia militant Max Stanford under his wing. During the last few years of Malcolm’s life, few persons were as closely associated with him as was the young Max Stanford, 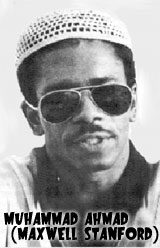 who later became known as Muhammad Ahmad. Stanford was a student militant who had influenced both the National Student Youth movement and the Students for a Democratic Society in the early 1960s with a vision of radical black nationalism.

Stanford fused the thought of Robert F. Williams on armed self-defense with the philosophy of Malcolm X on black self-determination. To these tenets, Stanford added a sophisticated Marxian revolutionary philosophy, which he derived from a close personal association with the legendary Queen Mother Audley Moore. Malcolm put his blessings on Stanford’s Revolutionary Action Movement by becoming an officer (International Spokesman) of the organization. RAM, in turn, served as the leading organized proponent of the visions of Malcolm X, Robert F. Williams, and Queen Mother Moore.

One enduring myth is that the Black Liberation Movement in 1964 was entirely pacifist. In fact, armed men and women played a prominent role in Freedom Summer and the movement as a whole, as historians Akinyele Omowale Umoja and Charles Cobb, Jr., among others, have documented. Though they were unable to save Chaney, Schwerner, and Goodman, the armed locals undoubtedly prevented others from meeting the same fate.

Perhaps the best-known advocate of armed self-defense was Robert F. Williams, head of the Monroe, North Carolina, chapter of the National Association for the Advancement of Colored People (NAACP). In the face of continuous state, KKK, and paramilitary violence, Williams insisted that black people had the right to defend themselves by, in the words of Malcolm X, “any means necessary.” The repression Williams faced, as a result, was relentless and he eventually had to leave the US and go into exile. First, he sought refuge in Cuba. After that, he was welcomed in China.

Monroe was a center of activities in the late 1950s and early 1960s related to the Civil Rights Movement because of its pervasive segregation. At this time, the city had a population estimated at about 12,000, with an estimated 7500 members of the Ku Klux Klan, according to press reports. Local NAACP chapter President Robert F. Williams, who returned from service with the Marines in 1946, began to work to integrate public facilities, starting with the library and then the city’s swimming pool, built with federal funds during the 1930s.

Williams also filed for a charter from the National Rifle Association (NRA) and formed the Black Guard, an armed group committed to the protection of Monroe’s black population. Members received weapons and physical training from Williams to prepare them to keep the peace and come to the aid of black citizens, whose calls to law enforcement often went unanswered.

In 1956, Williams took over leadership of the local chapter of the National Association for the Advancement of Colored People (NAACP), which was close to disbanding due to a relentless backlash by the Ku Klux Klan. Williams canvassed for new members and eventually expanded the branch from only six to more than 200 members. Robert F. Williams thereby became the first African American civil rights leader to advocate armed resistance to racial oppression and violence. Read more at http://www.pbs.org/independentlens/negroeswithguns/rob.html