As African Americans of all ages take to the streets in large numbers once again #blacklivesmatter to protest the police murder of Black men (and subsequent cover-up) in places like Ferguson Missouri and New York City, it is instructive to take a look back at why previous black mass movements and leaders went away. What the research shows is that the Black Liberation Movement of the 1960s didn’t just go away by itself. It was intentionally destroyed by a very sophisticated counter-insurgency strategy, code name COINTELPRO,  initiated at the highest levels of the US government. The most prominent of the African American leaders like Malcolm X, Martin Luther King, Jr., Fred Hampton, Huey P. Newton, Robert F. Williams, Max Stanford, Assata Shakur, and many other leaders of the Black Liberation Movement were either assassinated, imprisoned, or forced into exile. The organizations built and led by these leaders are either destroyed or  mere shells of their former selves.  However, many of these leaders are still around and should be sought out for their guidance. Doing so will help ensure that today’s movement does not suffer the same fate as those which came before.

Below is the reprinting of the actual COINTELPRO memorandum from FBI director J. Edgar Hoover to FBI field offices across the US. This document can best be described as the blueprint for the destruction of the Black Liberation Movement and the black community. In the late 1960s the existence of this document was not yet known. However, many of the leaders and activists knew that they were up against very powerful forces and that the things happening to them weren’t accidental. When you read this and related documents and FBI files, and you reflect back on what really happened to Martin Luther King Jr., Malcolm X, the Black Panther Party, H. Rap Brown, Fred Hampton and Mark Clark, and many more, bells go off in your head. It all begins to make sense. In the powerful documentary seen here, former producer/host of the NYC based program Like It Is (which used to air on WABCTV in NYC), GIL Noble, goes even deeper and reveals how the strategy to neutralize and destroy Black leaders and organizations did not begin in the 1960s. The same strategy was used against African American leaders like Marcus Garvey, Queen Mother Moore, and Paul Robeson decades before. Do the research yourself.

FBI COINTELPRO Memorandum – sent out by J. Edgar Hoover to FBI field offices on March 4, 1968, one month before the assassination of Martin Luther King, Jr.

The intentional destruction of Black America by the FBI using infiltration, counter-intelligence programs (COINTELPRO) and drugs. From Marcus Garvey to Paul Robeson to Ma…

The FBI heavily infiltrated Malcolm’s Organization of Afro-American Unity in the final … BLACK HATE established the Ghetto Informant Program and instructed 23 FBI … Overall, COINTELPRO encompassed disruption and sabotage of the … 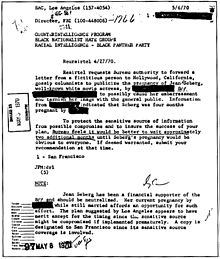 In his capacity as head of America’s federal investigative department, he was … Winston James, “They placed spies in the U.N.I.A. They sabotaged the Black Star  …

IN BLACK AND WHITE: THE F.B.I. PAPERS Following are transcripts of official FBI COINTELPRO documents obtained under the Freedom of Information Act.

of the Black Panther Party, the FBI established a special counter-intelligence program called COINTELPRO, to neutralize political dissidents. Between the years …

2 May 2013 … I later joined the Black Panther Party, an organization that was targeted by … policies, to destroy the Black Liberation Movement in the United States, … Under the COINTELPRO program, many political activists were harassed, …

By 1970, police and FBI pressure (see COINTELPRO), infiltration, sectarianism, the criminalization of the Black Power movement (including long prison …

(5) Several goals of COINTELPRO were set out. …… extent of the MPD fugitive search, the failure of the MPD to issue an all points bulletin for the white Mustang,  …

[5]. The official COINTELPRO label took place between 1956 and 1971. The FBI’s stated motivation was “protecting national security, preventing violence, and …

In addition, the Black Power movement was a global cultural and political … They sought the truth of black liberation in the pages of Frantz Fanon’s writings, ….. at the behest of the police and the FBI’s COINTELPRO, the Black Panther Party and  …

Both inherently and overtly political in content, the Black Arts movement was the … and was active in support of the Congolese liberation leader Patrice Lumumba. ….. and defeated by repressive government measures, such as Cointelpro and …

From Around the Web

5 Things You Should Know About Vitamin D Deficiency
10 Social Media Shares About the Horrors in Ferguson
Reparations, 40 Acres and a Mule, Plus Interest
‘Aunt Jemima’ Heir Sues Quaker Oats for $2 Billion in Royalties

Tags:Black Arts Movement, black liberation, Black Liberation Mvement, Black Panther Party, Black Power Movement, COINTELPRO, COINTELPRO program
We use cookies on our website to give you the most relevant experience by remembering your preferences and repeat visits. By clicking “Accept All”, you consent to the use of ALL the cookies. However, you may visit "Cookie Settings" to provide a controlled consent.
Cookie SettingsAccept All
Manage consent