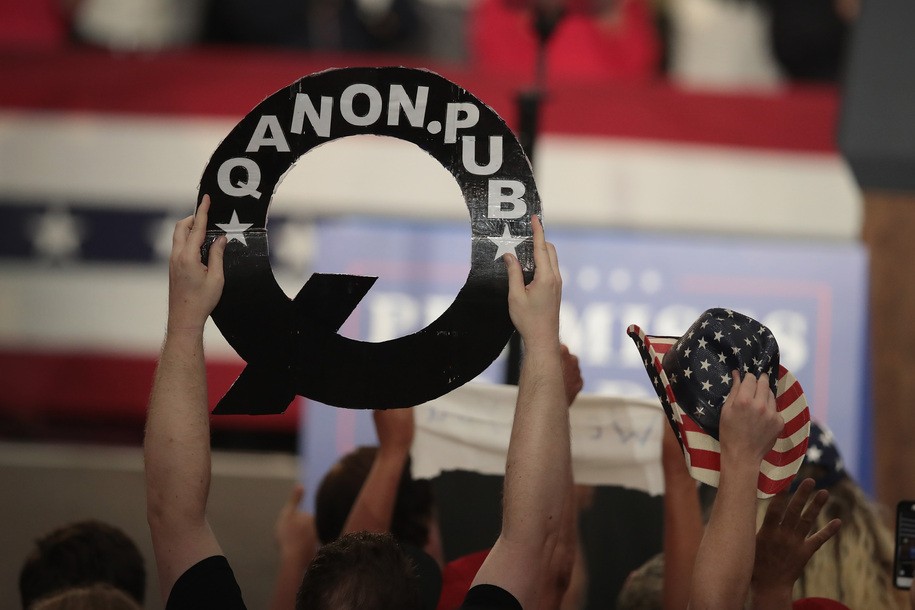 NBC News’ Ari Sen and Brandy Zadrozny reported this week that Facebook has undertaken an investigation into the spread of QAnon material on its social-media platform, and its findings so far are daunting and disturbing: There are thousands of Facebook groups spreading the conspiracy theories with millions of members.

“The top 10 groups identified in the investigation collectively contain more than 1 million members, with totals from more top groups and pages pushing the number of members and followers past 3 million,” they reported. “It is not clear how much overlap there is among the groups.”

The story further reported that Facebook ads had produced revenue for the company, though not a large amount: some 185 ads generated about $12,000 and some 4 million impressions over 30 days. These included ads for a “QAnon March for Children” in Detroit and a variety of QAnon-related merchandise.

A similar investigation from Julia Carrie Wong in The Guardian did a more focused dive into the tangle of QAnon pages on Facebook and Instagram, and found some 170 groups with more than 4.5 million aggregate followers. Moreover, it found that “Facebook’s recommendation algorithm has continued to promote QAnon groups to users and some groups have experienced explosive growth.”

The Guardian also documented an additional 73 groups and pages dedicated to QAnon with at least 1,000 followers or members each. Many of those 73 groups are brand-new—founded in May 2020 or later—and they have already amassed an aggregate following of more than 560,000 people.

These newer groups and pages also demonstrate the spread of QAnon around the world. They include groups dedicated to QAnon followers in the United Kingdom, Northern Ireland, Canada, Australia, Mexico, Brazil, Germany, Poland, the Netherlands, Bulgaria, Hungary, the Czech Republic, Romania, Serbia, and Slovenia. The largest international QAnon groups documented by The Guardian were German, Italian, Polish, Dutch, Australian, and British.

This global growth, as Vice’s Mack Lamoreaux recently explored, means that there are now QAnon believers in such far-flung places as Finland, Germany, France, the U.K., Canada, Japan, and Iran. “While the actual details of the conspiracy are hyper-focused on the U.S., the broad strokes can be applied to almost anywhere, which helps to explain the rapid growth of QAnon across borders,” the report observes.

Recent analyses of the QAnon phenomenon suggest that much of the recent spike in QAnon activity is correlated with the recent COVID-19 pandemic: a Concordia University-based QAnon researcher named Marc-André Argentino found, after a data sweep, that QAnon has had a 71% increase in Twitter content and a 651% increase on Facebook since March. Much of that increase, he told Lamoreaux, was related to the spread of the cult globally.

Journalist Julian Feeld—who co-hosts the QAnonymous Podcast, devoted to exposing and debunking the cult—recently compiled a graph showing the frequency of internet searches for the term “adrenochrome” (QAnon followers believe that the liberal pedophilic conspirators trafficking hordes of children also harvest the hormone from their dying victims for their own consumption). He found that it spiked dramatically in mid-March, and has remained at a high level since then.

The correlation presumably is related to the significant increase in internet time that has accompanied the COVID-19 pandemic—estimated at a 47% rise in data usage. QAnon cultists targeted the public’s fears early in the pandemic as a way of leveraging their conspiracy theories into the mainstream, and they found a nearly captive audience sitting in their homes ready for “red-pilling.”

Facebook has made previous half-hearted attempts to push out QAnon-related content that did little to address the underlying problem—namely, its innate spread of disinformation. When pressed about the recent numbers showing exponential growth, a Facebook spokesperson painted a rosy picture for NBC News.

“Enforcing against QAnon on Facebook is not new: we consistently take action against accounts, Groups, and Pages tied to QAnon that break our rules. Just last week, we removed a large Group with QAnon affiliations for violating our content policies, and removed a network of accounts for violating our policies against coordinated inauthentic behavior,” the spokesperson wrote in an emailed statement. “We have teams assessing our policies against QAnon and are currently exploring additional actions we can take.”

The normalization of QAnon’s conspiracism has spread from social media into the real world, where an increasing roster of Republican candidates, all fully supported by their respective state parties, have made it onto the November election ballot. One of the most notorious of these—Jo Rae Perkins, the Oregon GOP’s nominee for the state’s Senate seat—even called for Donald Trump to declare martial law in her state, to battle “antifa.”

It would be one thing if QAnon conspiracism only manifested itself in the adoption of kooky beliefs and nothing more. However, time and experience have demonstrated that the cult also has a known propensity to spark violently unhinged behavior.

The cult’s underlying appeal—of being a heroic warrior for truth battling against the vilest of evils—is what attracts so many followers to QAnon, and simultaneously creates permission in their minds for committing the most atrocious acts of violence one can imagine. We’ve already seen this playing out in domestic-terrorism incidents that, fortunately, did not reach fruition:

A QAnon fanatic armed with an AR-15 and an armored truck blocked traffic on the Hoover Dam and demanded the inspector general’s report on the government investigation of Hillary Clinton’s email practices in June 2018.
A California man arrested in December 2018 with bomb-making materials in his car told investigators he intended to use them to “blow up a satanic temple monument” in the Springfield, Illinois Capitol rotunda. His larger intentions, he said, were “make Americans aware of Pizzagate and the New World Order, who were dismantling society.”
An Illinois woman who became a fanatical QAnon devotee livestreamed herself on a cross-country trip, armed with a collection of illegal knives, to New York City, where she hoped to “take out” Democratic presidential nominee Joe Biden. NYPD officers arrested her there.
The young man who murdered Gambino mob boss Frank Cali, who gorged himself on QAnon theories online, told investigators he committed the crime because he believed that Cali was part of the “Deep State” operation to sabotage Trump’s presidency.
The Los Angeles locomotive engineer, also a QAnon fan, who drove his engine at high speed off the tracks near the docks where the U.S. Naval Ship Mercy was stationed as part of the federal response to the COVID-19 pandemic—it halted about 800 yards away from the ship—told arresting officers he was hoping to ram the ship because he believed the claims (primarily from QAnon theorists) that the patients were going to be secretly carted off to Guantanamo: “You only get this chance once. The whole world is watching. … I had to. People don’t know what’s going on here. Now they will.”

A recent study by West Point’s Combating Terrorism Center determined that QAnon is “a security threat in the making.” It examined several cases in which cult believers acted out violently, and found that “QAnon represents a public security threat with the potential in the future to become a more impactful domestic terror threat. This is true especially given that conspiracy theories have a track record of propelling terrorist violence elsewhere in the West as well as QAnon’s more recent influence on mainstream political discourse.”

What makes QAnon so potent, the study found, is that it’s a kind of meta-theory: A great gathering ground of multiple conspiracist belief systems under one umbrella, compatible with existing structures. “QAnon followers share roots with conspiracy theories that have fed other anti-government movements, such as the ‘90s militias that feared the ‘New World Order,’ or the anti-government apocalypticism and religious fervor of the Branch Davidians,” the paper said.

“Based on the authors’ observation of QAnon activity on Telegram, there is a growing overlap between QAnon channels and more extremist channels affiliated with the proud boys, paramilitary groups, and white supremacists,” the study concluded. “QAnon is arguably no longer simply a fringe conspiracy theory but an ideology that has demonstrated its capacity to radicalize to violence individuals at an alarming speed.”