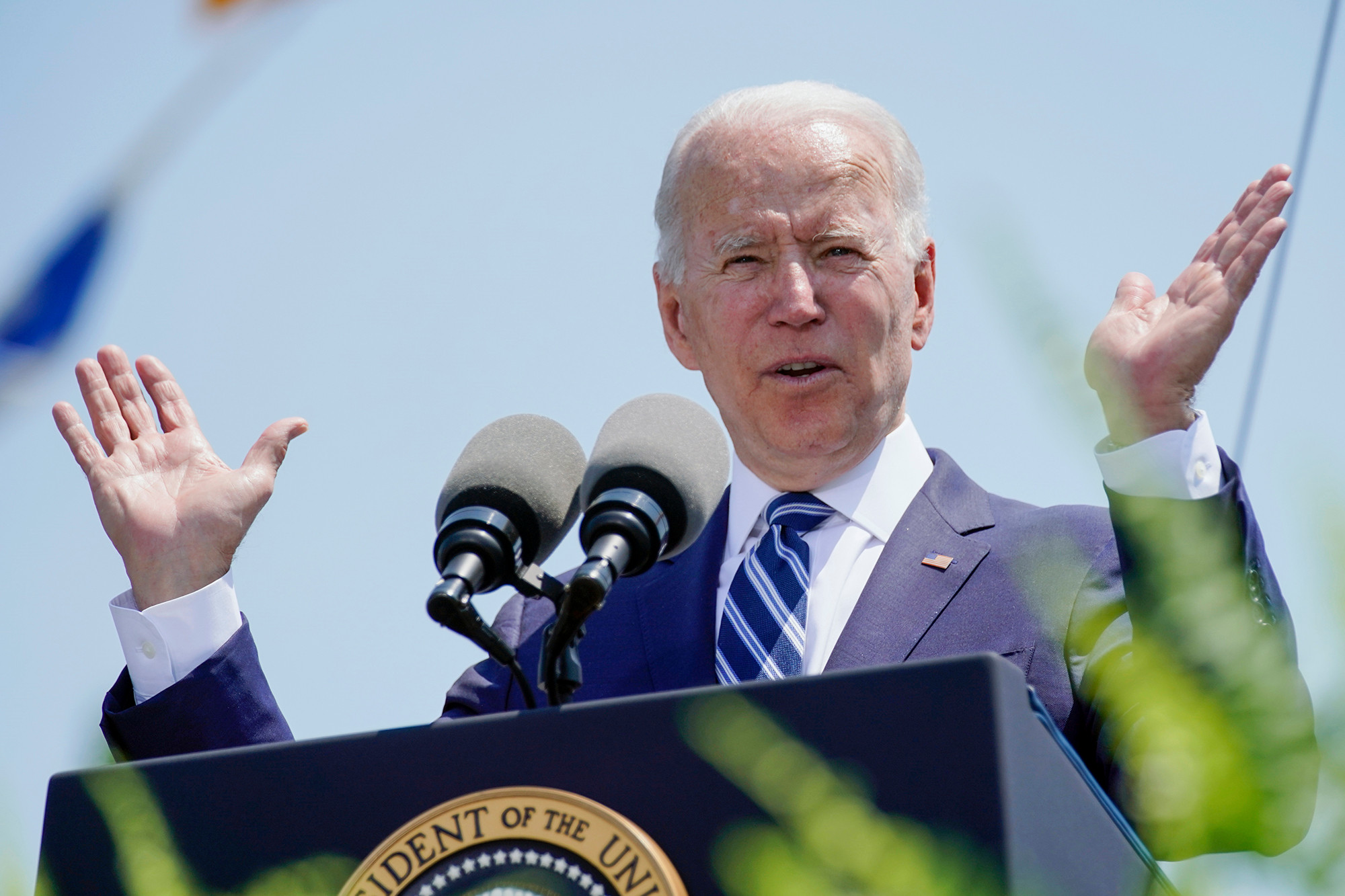 President Biden delivered rollercoaster remarks Wednesday at the US Coast Guard Academy’s graduation ceremony, calling the grads a “dull class” while boasting of his own college exploits including a fire-extinguisher assault on his dorm’s RA.

Biden attempted to earn laughs at the expense of the US Navy, but when the cadets didn’t respond, he turned on them.

“I can only assume that you will enjoy educating your family about how the Coast Guard is quote, ‘the hard nucleus around [which] the Navy forms in times of war,’” Biden said, to crickets, at the outdoor event in New London, Conn.

Biden then jeered his crowd: “You are a — you are a really dull class. I mean, come on, man, is the sun getting to you? I would think you would have an opportunity when I say that about the Navy to clap.”

That jab earned nervous laughter from the cadets and a smattering of applause.

At two other points, Biden requested applause from the crowd.

“You can clap, come on, man,” Biden said when he joked about cadets spending “too much time at the Slice,” a local pizza parlor.

He again encouraged the crowd to clap when he praised the academy’s Bravo Company for winning a football game against a rival set of cadets.

“Congratulations the Bravo Company, by the way, on your victory. You can clap. It’s okay. Even if you’re lost, you gotta clap,” Biden said.

Biden later said he would “absolve” the graduates of any misdeeds from their time at the school.

The president told the cadets that as a University of Delaware student in the 1960s, he committed “minor infractions like using a fire extinguisher to hose down an RA.”

Biden also gave some remarks on foreign affairs during his speech.

The president touted a recent US-Taiwan agreement involving the Coast Guard and promoted US cooperation with Ecuador to chase off a Chinese fishing fleet in 2020 near the Galapagos Islands.

“Our new agreement for the Coast Guard to partner with Taiwan will help ensure we are positioned to better respond to shared threats in the region, and to conduct coordinated humanitarian and environmental missions,” Biden said.

The Beijing-based Chinese Communist government considers Taiwan a rogue capitalist province and US leaders since the 1970s have generally refrained from treating the island as an independent entity.

Among the remarks during Joe Biden’s speech, he called the graduates “dull.”AP

Biden also called the Persian Gulf the “Arabian Gulf” in an apparent snub of Iran, which he slammed for harassing US ships.

“In the Arabian Gulf, are in the process of deploying six new fast response cutters,” Biden said.

“Based alongside the US Navy Fifth Fleet in Bahrain, you have to face down harassment of Iranian fast attack boats in recent weeks,” Biden said. “And in recent weeks, US Coast Guard Cutter Maui had to fire 30 warning shots to deter such irresponsible and unsafe maneuvers in the region.”