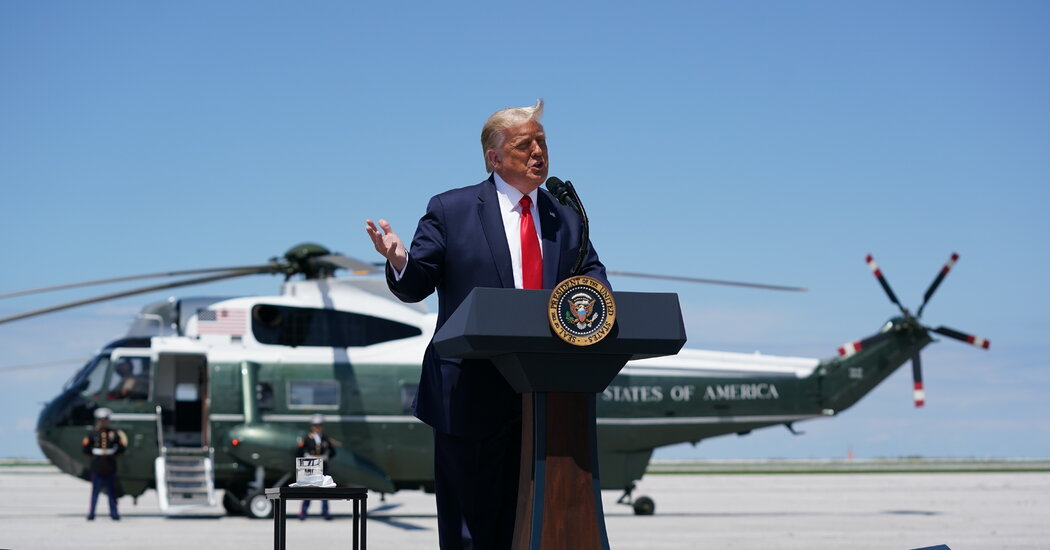 Members of the Commission on Presidential Debates on Thursday rejected the Trump campaign’s request for changes to the fall debate schedule, declining to shift the debates earlier or add a fourth debate to the calendar.President Trump and his campaign had argued that the current debate schedule, which calls for three debates between Mr. Trump and Joseph R. Biden Jr. in late September and October, would render them all but useless to the many Americans who will by then already have voted by mail.“How can voters be sending in Ballots starting, in some cases, one month before the First Presidential Debate. Move the First Debate up,” Mr. Trump said Thursday morning in a tweet. “A debate, to me, is a Public Service. Joe Biden and I owe it to the American People!”The president’s urging came one day after Rudolph W. Giuliani, a campaign adviser to Mr. Trump, wrote to the commission to discuss the timing of the debates and sent a list of two dozen journalists “for consideration as moderators.”In its response to Mr. Giuliani on Thursday, the commission said that people planning to vote by mail could wait until after viewing the debates to send in their ballots if they so choose.“While more people will likely vote by mail in 2020, the debate schedule has been and will be highly publicized,” the commission, which is nonpartisan, said in the letter. “Any voter who wishes to watch one or more debates before voting will be well aware of that opportunity.”The commission also sidestepped Mr. Giuliani’s list of preferred moderators, saying simply that it would exercise “great care, as always, to ensure that the selected moderators are qualified and fair.” Mr. Giuliani’s list was heavy on Fox News personalities and conservative talk-show hosts.Campaigns have no formal say in the debate schedule, which was set months ago, and at least technically speaking, the commission has sole discretion when it comes to selecting moderators. But officials have already had to change the location of two of its four events, after a pair of universities that were set to host pulled out because of concerns about the coronavirus.The first presidential debate is scheduled to be held on Sept. 29 in Cleveland; the second on Oct. 15 in Miami; and the third on Oct. 22 in Nashville. A vice-presidential debate, scheduled for Oct. 7, will be held in Salt Lake City.In his letter to debate officials, Mr. Giuliani wrote that “as many as eight million Americans in 16 states will have already started voting” early by the time the first debate takes place.“Simply put, the commission’s current approach is an outdated dinosaur and not reflective of voting realities in 2020,” Mr. Giuliani wrote. “For a nation already deprived of a traditional campaign schedule because of the Covid-19 global pandemic, it makes no sense to also deprive so many Americans of the opportunity to see and hear the two competing visions for our country’s future before millions of votes have been cast.”Mr. Biden’s campaign had mostly dismissed his opponent’s proposals, calling them a “distraction,” while affirming that Mr. Biden would take part in the events as planned.“We’re glad that Donald Trump is now following Joe Biden’s lead from June and — at long last— has accepted the commission’s invitation to debate,” TJ Ducklo, a spokesman for Mr. Biden, said on Thursday.“As we have said for months, the commission will determine the dates and times of the debates, and Joe Biden will be there,” Mr. Ducklo said. “Now that Donald Trump’s transparent attempt to distract from his disastrous response to the virus is over, maybe now he can focus on saving American lives and getting our economy back on track.”Michael P. McDonald, a political science professor at the University of Florida who studies American elections, said he had discussed the timing of the debates and early voting with the commission. He said Mr. Giuliani was correct in asserting that millions of Americans will have received their ballots and have had the opportunity to vote by mail by Sept. 29.But he said that based on his research from previous presidential elections, far fewer people will have actually voted by that time. And those who choose to vote very early, he added, are likely not the types of people who would be swayed by a television debate.“These are people who are hard partisans,” Mr. McDonald said of those who cast early ballots.“They’ve made up their mind a long time ago as to who they’re going to vote for,” he said, adding that “no debate is really going to sway them one way or another.”Mr. McDonald said he thought there was “very little risk” involved in having early voting start before a debate has taken place, and that although his data was incomplete, his best estimates suggested that only about 10,000 people had actually voted by late September during the 2016 election.Many signs point to increased turnout this fall, he said, and because of risks posed by the virus, more people could chose to vote very early by mail. But in all likelihood, he added, “it’s not going to be millions.”Michael Grynbaum and Maggie Haberman contributed reporting.