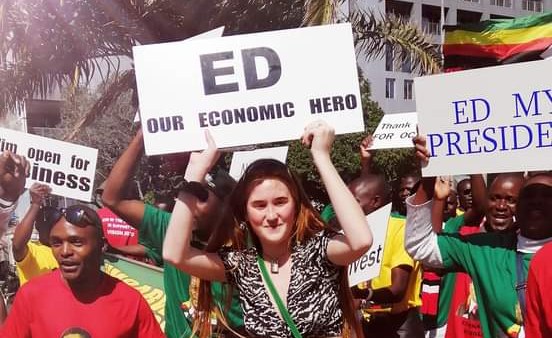 Cape Town — Today marks one of the most important days in the history of our nation Zimbabwe. ZANU PF Cape District wishes to express its deep, heartfelt congratulations to His Excellency President Emerson Dambudzo Mnangagwa and the people of Zimbabwe on this auspicious occasion of the 41th Anniversary of Independence! This very special day, forty one (41) years ago, the people of Zimbabwe became free and liberated from the shackles of bondage and colonial subjugation visited upon them for nearly a century by colonial settlers, after an arduous, bitter and protracted armed struggle. It is a great day of jubilation as we celebrate the fundamental freedoms and sacrosanct liberties that were ushered in by our gallant fallen and living heroes who selflessly sacrificed their lives to set us free as we are today! We say Congratulations! Makorokoto! Amhlope Zimbabwe!
Now the theme under which this year’s celebrations are being held;”[email protected]: Together growing our economy for a prosperous, resilient and inclusive society”, speaks volumes and attest to the unflinching  commitment of the Administration led by H.E President Mnangagwa in fulfilling the aspirations of the people of Zimbabwe through Vision 2030.
The President, immediately after being declared the winner of 2018 plebiscite, quickly indicated his willingness and desire to unite all the people of Zimbabwe to work together as one for he considered this, in his wisdom, the best way forward after years of polarization and the politics of rancour and acrimony of yesteryear. In an unprecedented move of inclusivity, he reached out to all the presidential candidates to come together as one to draft a framework of  engagement for national dialogue under which each of them was to contribute and cross pollinate ideas for the crafting of a National Shared Vision to take Zimbabwe forward. This was in recognition of the fact that a united people is the most important asset of any nation and no-one despite differences in perspectives, had to be left behind in the developmental agenda to attain the aspirations of the Zimbabwean people for an upper middle income economy by 2030.Of course, the leaders of these various political parties were to come to the table in their representative capacity. That endeavor culminated in what is called Political Actors Dialogue today. Esprit de Corps! There is strength and power in unity and togetherness!
Now as we commemorate this momentous occasion of our   Independence, we are not oblivious of the objectives for which the liberation struggle was waged. We stand cognizant of the wishes and aspirations of our valiant heroes for the people of Zimbabwe. It does not escape us that they were desirous of giving a priceless gift of freedom, peace, unity, harmony and tranquillity to every citizen of our beloved country and entrust the ownership of resources equitably in the hands of the sons and daughters of the soil for their eternal enjoyment without any semblance of segregation. The struggle for the realization of total emancipation has been on-going since then and has become more pronounced in the Second Republic under the astute leadership of H.E President Mnangagwa.
Zimbabwe has been subjected to almost two decades of reeling under the blows of economic sanctions illegally imposed for daring to perpetuate the struggle for economic emancipation by way of the watershed land reform program, and left out in the global economic arena. This caused a lot of hardships for the people of Zimbabwe in various facets of their lives who however remained indomitably resilient.
It is therefore imperative to note that the formation of the Government (new dispensation)  provided an opportunity for reconstruction and transformation of the economy to one capable of creating and offering maximum opportunities for people,taking advantage of the vast and diversely abundant local resource endowments as well as tapping into investment prospects from international markets through Vision 2030.A well chiselled out strategy to attain an upper middle income economy by 2030 was crafted and its first leg was Transitional Stabilization Programme Reforms Agenda that saw the laying down of fundamentals for stabilization,confidence rebuilding and sustainable growth. Engagement and re-engagement to jig-saw-fit into the international community became an imperative.TSP primarily provided for creating the necessary macro-fiscal environment for stabilisation and investment mobilisation to facilitate economic growth.
Now Zimbabweans can attest to the commitment of the Administration in bettering their livelihoods through the progress made under TSP and subsequently relayed to National Development Strategy Phase 1.The New Dispensation was in no time able to tame running inflation and stabilize prices of goods and services through the reintroduction of the local currency and establishment of the Dutch Forex Auction System. Production has been steadily increasing in industries as compared to dollarisation era where production costs were so high and rendered Zimbabwean products uncompetitive on the regional and international market. Zimbabwe was more of consumptive than a productive economy during dollarisation but due to well calculated endeavours by the new dispensation, this is being reversed.
We also celebrate the significant improvement in power supply in the country. Electricity is no longer erratic as it used to be and this has also aided economic activities, with steadfast  and unwavering dedication by leadership in advancing power generation infrastructural development and modernization that saw the construction of Hwange Unit 7 &8 among  others like Zambezi Gas and Coal, Jinan to mention a few to feed into the national grid.
In the current dispensation, fuel queues are a thing of the past. People no longer have to spend their precious productive time standing in meandering queues for fuel.Fuel stations are now invariably and adequately stocked to cater for the motoring public.Surely this indicates that we are together steadfastly going somewhere and the leadership is in total control.

The future and development of a nation is in the hands of the youth.In recognition of this notion, the Government has been providing and including not only youth but also women in key decision making positions in the public sector. The leadership is desirous of grooming a youth that will be able to protect our sovereignty, defend the legacy and gains of our Independence and develop the nation for all into a prosperous, foreseeable future.To this end,empowerment programs has been set up and young entrepreneurs are being promoted to engage in production of goods and services.The establishment of Empowerbank and incorporation of National Venture Capital Fund is meant to aid and provide assistance to Youth and Women entrepreneurs in the country.In addition,land is being distributed to derseving youth capable of utilising it regardless of any affiliation! No country can succeed and develop without watering the passion of young entrepreneurs and creating a conducive environment for them to blossom!
The Second Republic also realised the significance of quality education in transforming the lives of people and introduced Education 5.0 with an empasis on innovation and industrialization of Zimbabwe. Education 5.0  envisages a mining, agriculture and digital innovation economic model that uses natural resources to offer world class services thereby attracting global economies of scale as the best foot forward for Vision 2030.The curriculum has been changed to ensure that tertiary institutions nurture graduates for a job-creator mindset that are able to produce goods and services using the resources around them,fitting well into the heritage based philosophy. All this is meant to create a steadfast paddle to propel the people of Zimbabwe into the future they aspire and wish for.The fruits of this came into light with our universities becoming hubs for manufacturing essential materials required in the health sector,for instance the  production of a medicine to be used in treatment of covid-19 from Zumbani in recent weeks among many other innovations.
In the transport sector, the government has demonstrated an unflinching desire to provide safe and affordable transport in the nation.A lot of changes has been effected to regulate and bring normalcy to public transport sector. A lot of ZUPCO buses has been commissioned and the Administration continues to work hand in glove with private partners to ensure that public transport is provided adequately to ease the woes of the commuting public.In addition,construction of roads  across the country is ongoing unabated. A road is an economic enabler and the Administration understands that attainment of an upper middle-income economy cannot be attained without first improving the national roadworks.There has been massive rehabilitation of urban and rural roadworks in the country funded by local resources through  ZINARA.The Harare-Beitbridge road has been dualised and Chiredzi -Tanganda road has been significantly improved.These roadworks improve the lives of the people in these areas and provides jobs to the surrounding communities during  construction.
The New Dispensation has also demonstrated its commitment to improving  the living standards of the people of Zimbabwe by making sure that the nation and each household becomes food secure by using strategies outlined in Agriculture Recovery Plan.The expansion and rehabilitation of irritation projects and dam construction across the country is meant to climate-proof our farmers and this heralded the resolute implementation of SMART agriculture.
The concept of Pfubvudza was introduced and well embraced nationwide and as we speak,t he country is expecting a bumper harvest thanks to the visionary leadership of the New Administration.In 2019/2020,Zimbabwe had a maize harvest of 908 thousand tonnes but this year estimates are at 2.8 million tonnes! The Presidential Input Support Scheme continues to reach many  citizens well deserving of this help to ensure they are food secure.The driving motive and passion by the Administration is to see all the people of Zimbabwe live a prosperous,economically and financially stable life and Vision 2030 is the strategic vehicle that will take us there!
In light of growing the economy for an inclusive society,the current administration has established a Diaspora Desk that will cater for all those in Diaspora to play a pivotal role through skills transfer and investments back home,motivated by the desire not to leave anyone behind nomatter where one is located in the world.This is meant to ensure that those in the Diaspora gets involved at every level of remodelling and transformation of our economy,inculcating a strong sense of belonging and participation.
The aforementioned  are some but a few,among an ocean of strategies and endeavors,to see a better today and a better tommorow by the Second Republic for its citizens.It therefore leaves no equivocation or the  slightest of doubt that the New Dispensation led by President H.E Mnangagwa,in an inclusive manner,with a spirit of oneness and togetherness,is the best foot forward and is most sincerely preoccupied with ensuring and facilitating the actualization of the aspirations and wishes of the people of Zimbabwe as invisaged by the Heroes who laid down their lives and lost limbs to see us a free and sovereign people! We salute our heroes and will continue guarding the gains of our Independence with our blood and breath!
Once again, Happy Birthday Zimbabwe!
Cde Tinashe Mukori is the ZANU PF CAPE DISTRICT Spokesperson