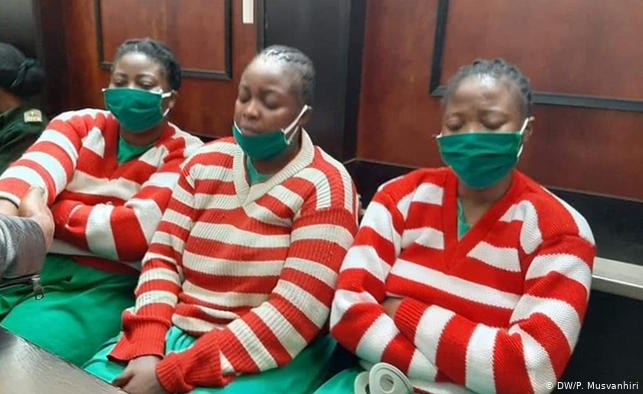 Harare West legislator Joana Mamombe and party activist Cecilia Chimbiri will spend the night at Chikurubi Maximum Prison after Magistrate Stanley Mambanje postponed their bail application to Wednesday.
Mamombe, Chimbiri and Netsai Marova were arrested in Harare yesterday with the latter released in unclear circumstances.
ZRP has charged Mamombe and Chimbiri with section 11 of SI 83 2020 -obstructing or hindering police officer performing duty during lockdown. Allegations are, they shouted at police saying do not to arrest people, release them in Shona.
Speaking after the deferment of the matter, the duo’s lawyer Charles Kwaramba from the Zimbabwe lawyers for Human Rights (ZLHR) said they will be back in court tomorrow.
“They are being charged with contravening section 177 of the Criminal Code that is undermining the authority of the police or alternatively contravening section 11 of SI 83 of 2020 they allege that hindering or obstructing police officers during the performance of their national lockdown duties so they have appeared in court today unfortunately we could not do much today.

“The state applied that we deal with the matter tomorrow because it’s too late as a result of the Covid regulations and wanted to go home to beat the curfew so we are coming back tomorrow,” said Kwaramba.
Kwaramba said he was not happy with the continued arrest of his clients who are denying the charges.
“Obviously as a lawyer I am not happy. They are denying the case and in due course they will be telling you the real story of what happened. We reserve much of our thoughts, views and defence at the moment. We can let everyone write whatever they want but we will tell our story at the appropriate fora at the right time.” he said.
Kwaramba confirmed that Mamombe and Chimbiri suspect that they are being trailed and he would deal with the allegations in court tomorrow.