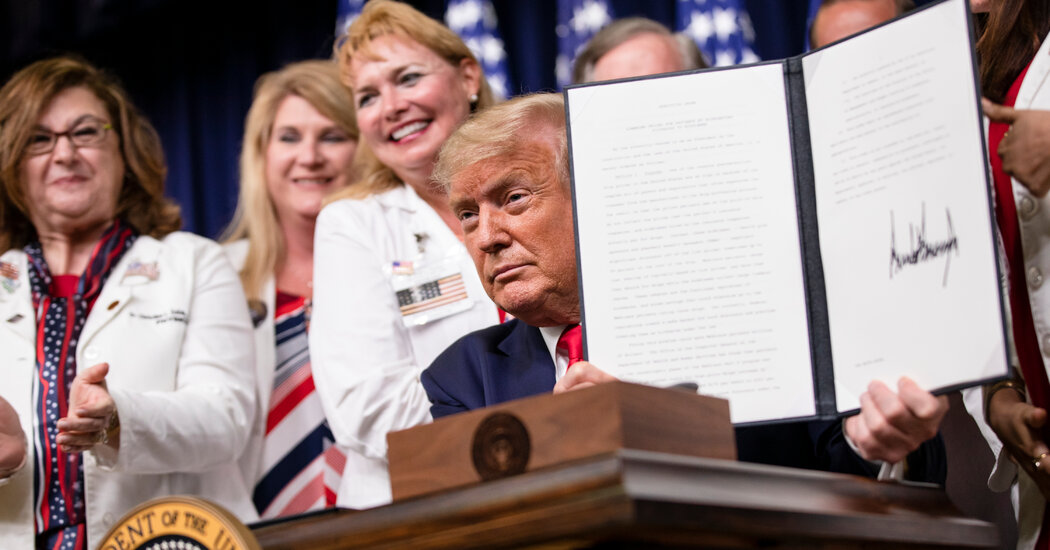 Mr. Trump has embraced the issue of high drug prices since his 2016 campaign, promising that he will fight the powerful pharmaceutical industry to deliver relief to American consumers. But the administration has delivered little policy on drug prices. The courts overturned its effort to require drugmakers to publicize the list prices of medications. Other efforts, like the one to establish an international price index for certain drugs, were proposed and shelved.The president has spoken intermittently about his desire to peg the price of prescription drugs to the prices paid by other countries, which are typically lower than those in the United States. An earlier proposal from the Department of Health and Human Services would have established a pilot program where certain drugs were priced based on an average of foreign prices. Mr. Trump’s remarks suggest that he now prefers a policy where drugs would be priced according to the lowest price paid by peer nations.The pharmaceutical industry has always opposed the policy.“The ‘most favored nation’ executive order is an irresponsible and unworkable policy that will give foreign politicians a say in how America provides access to treatments and cures for seniors and people struggling with devastating diseases,” said Nicole Longo, a spokeswoman for PhRMA, the largest industry trade group.The industry’s opposition to international index pricing is shared by many Republicans in Congress, who say they think adopting drug prices from countries where prices are set by the government is effectively importing socialism. Joel White, a Republican strategist, called it “really bad policy,” because it amounted to “importing other countries’ price controls,” and “misguided” because it was targeted at medicines given in doctors’ offices or hospitals.“People are concerned about what they pay for pills at the pharmacy counter,” he said.Polls have consistently shown that the public trusts Democrats more than Republicans on matters related to health care. Democrats rode their emphasis on health care to control of the House in 2018, and they expect to make it a major issue again this year.At the end of 2019, the House passed a bill aimed at lowering all drug costs by empowering the government to negotiate with pharmaceutical manufacturers — a policy Mr. Biden has embraced — but the bill stalled in the Senate.The House bill would also link prices for up to 250 common drugs in the United States to prices overseas. It would also apply the benchmarking more broadly, to include retail drugs and to apply to drugs bought by people with private insurance, not just those in Medicare.