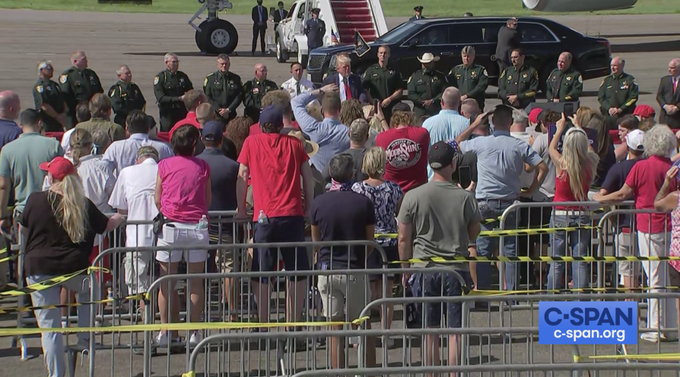 Donald Trump has spent most of the year aching to get back in front of his supporters. The one time he did, however, the turnout was quite terrible. Following the Tulsa disaster, Trump has seen a New Hampshire rally, and the Jacksonville portion of the RNC canceled.
On Friday, the President did get the chance to speak to some of his supporters at a Tampa Airport. Like the event in Tulsa, though, the crowd size was less than impressive.
Florida is currently the world’s COVID-19 epicenter. On Friday, the state reported 252 deaths from the illness, its highest total to date. Still, the majority of the people listening to Trump speak were neither wearing masks nor observing social distancing guidelines.

From the podium, the President attacked the presumptive Democratic candidate Joe Biden. He told the crowd:
“If Joe Biden is elected President, the chaos and bloodshed will spread to every community in our land. You’ll have a Portland everywhere. There will be no safety, no security, no peace, no justice, no one to protect you, and no one to defend the American way of life. People like the ones standing behind me will not be considered primetime. With me, they’re considered primetime.”
Trump spent about 30 minutes talking to his supporters. When he wasn’t focused on Joe Biden, he talked at length about the plight of the policemen and women who stood beside him. Despite the current health crisis in the state, the President barely took the time to mention the pandemic.