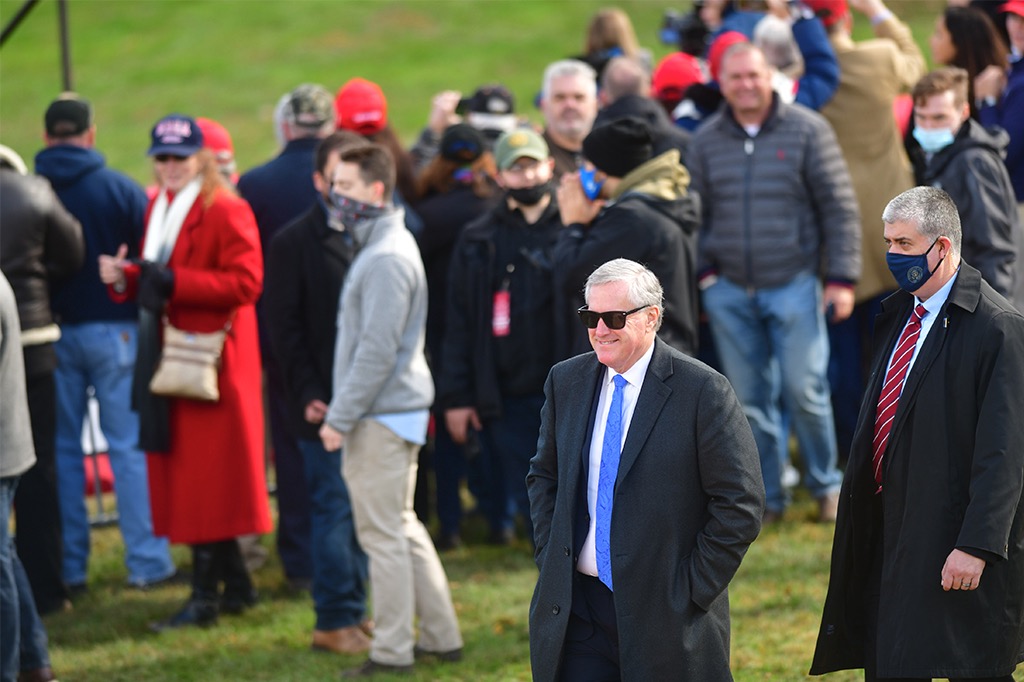 White House chief of staff Mark Meadows has tested positive for COVID-19, according to a new report Friday.
Meadows, 61, informed a close circle of advisers after Election Day, Bloomberg News reported.
His diagnosis with the dangerous bug follows that of his boss, President Trump, who was hospitalized with COVID-19 last month, and comes in the middle of a fiercely contested presidential election with Joe Biden poised to capture the White House.
Trump campaign aide Nick Trainer and at least two other White House aides currently have the coronavirus, sources told Bloomberg.
The ongoing White House outbreak comes as the country tallied at least 121,289 new cases on Friday — breaking the national record for new cases for the third time in as many days.
It’s unclear when Meadows was diagnosed.
But it’s understood he has been at the White House in recent days, advising the president on how to handle his disappointing finishes in must-win states, and was in the East Room in the early hours of Wednesday morning when Trump falsely declared himself the victor.
The former North Carolina congressman’s diagnosis means that he and anyone who came into contact with him will have to enter quarantine just as the president prepares to mount a massive legal battle to contest the vote count in states where Biden is narrowly ahead.
Meadows’ diagnosis is the latest case in the West Wing,  which has seen dozens of coronavirus infections, including the president, the first lady, their son Barron, press secretary Kayleigh McEnany, senior counselor Hope Hicks and Trump campaign manager Bill Stepien.
Despite the risk to his own health, Meadows was a shadow at Trump’s side as the president battled the disease, riding with him on Marine One to Walter Reed Military Medical Hospital and sleeping not far from the president’s hospital bed.
The ex-lawmaker was one of the many Trump administration officials who had shunned wearing a mask on the White House grounds, even when talking with reporters.
Meadows is the president’s third chief of staff after taking the role in March amid the worsening pandemic.
His performance has been chequered by gaffes which have angered the commander-in-chief, including telling reporters that the president’s vitals were “very concerning” during his coronavirus battle — countering the upbeat message of Trump’s doctors.