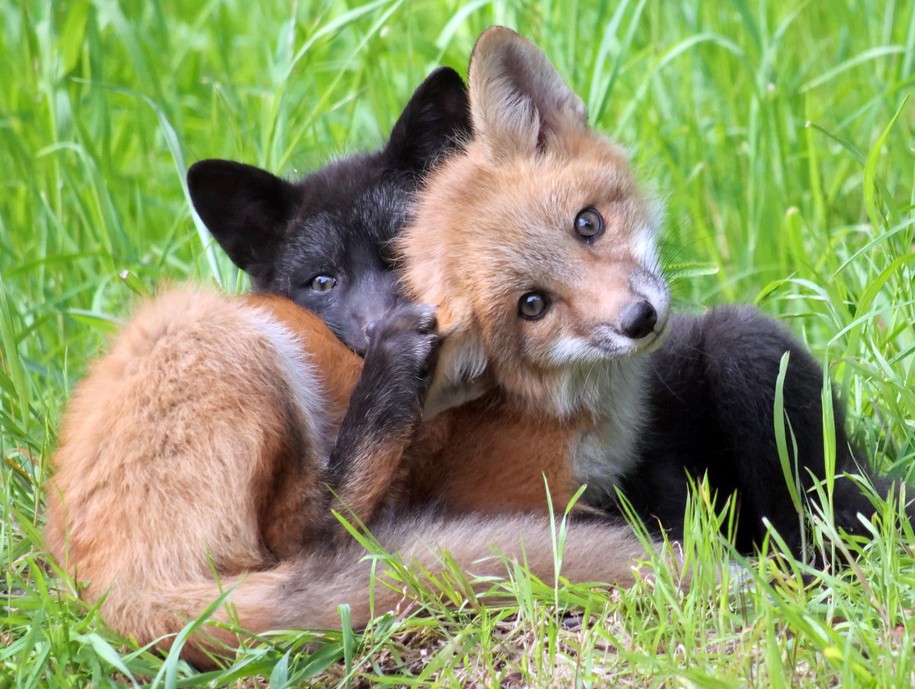 Appy, who writes regularly for the Bucket, agrees that although the group is grounded in nature, the personal connections in comment threads have solidified a far-flung assortment of people into “one big, happy, growing family.” Appy adds that the group sparked for them “a renewed interest in photography. My progress in that craft has been frustrating and fulfilling, enhanced due to the ability to share struggles and accomplishments in the comfort of our group. I am very grateful for the friendship, inspiration, knowledge, and advice other members have provided. I do what I can to do the same for others.” Appy’s most recent The Daily Bucket story, Scissortails in Flight, is evidence of photographic prowess, and the comments reflect the group’s wide-ranging but ever-supportive interests, as does RonK’s story highlighted below.

“The writers and the commenters have become my friends, more so than many of my personal acquaintances. I would love to meet some of our members in person, but I feel that I know them very well through the photos and thoughts we have shared here,” wrote lostintheozarks, who started to read Daily Kos for politics, but found a niche here when she realized “that this was not just a political place, but that a real love for nature and the environment was in evidence here.”

That love for nature and the environment knits the personal to the political for OceanDiver, who says, “Every once in a while someone will comment in a Daily Bucket asking why we post about nature at a political blog. Besides just sharing the joy and beauty of the natural world, there’s an important political role. Our primary purpose is sharing observations of phenology, that is, the timing and extent of things like blooming, migration, rainfall. Most people have noticed that global climate change is shifting what’s ‘normal’ in nature before our eyes. It’s valuable to document the changes, and as Mark Sumner noted 10 years ago when he created the Backyard Science Community group, anyone can do that. In fact the scale of granular data generated by citizen scientists can’t be duplicated by professional scientists. Additionally, the more people pay attention to nature, the more likely they are to do the work needed to rein in the destructive human activity that threatens it. That work includes political action as well as personal lifestyle choices. Nature and wildlife need all the advocates they can get in our human-centric world.”

Astute observation—natural, political, and artistic—is reflected in this week’s eight rescued stories. Community Spotlight’s Rescue Rangers read every story published by Community writers. When we read great work that isn’t receiving the attention it deserves, we rescue it to our group blog and publish a weekly collection—like this one—each Saturday at 7:30 p.m Pacific time. We look at an author’s Community participation to see if they comment on their own stories and comment on or recommend other stories. Because new members may not realize that a Community exists here, we don’t expect the same level of participation from new people that we seek in more experienced members. Our rescue priorities and actions were explained in a previous edition: Community Spotlight: Rescuing your excellent stories for over 14 years.

“I was never in it for the money, as there really wasn’t any. I did it because I love playing music, and the feeling of getting out and performing it live for others. Still, when you’re being exploited in such a manner, it does get to you,” writes Plunky Bluester in Pay to play. The San Francisco-area musician observes that raising the minimum wage is a great thing, but there’s one profession in which $7.25 an hour would be a huge increase: live music. He explains the economic pressures and the lengths to which venue owners have gone to short-change their hired talent. “Those (clubs) that still exist operate now on a premise that musicians are a commodity that should be offering themselves, and their talent, for little to no compensation.” This peek behind the stage door evidences that the chances of making a living as a musician are bleak, and the gulf between broke and millionaire is wide. This is Plunky Bluester’s first story for Daily Kos, and the first rescue.

Michelewln revives interest in the 1920’s hero of the Charlie Chan detective novels in Street Prophets Sunday Coffee Hour: The Charlie Chan Mysteries by Earl Derr Biggers. The Detective Chan of the novels is not the same, she notes, as the figure in the slightly later movies, and both cut against anti-Asian stereotypes in some ways, while succumbing to them in others. Despite his respect for Chinese culture, she writes, “Biggers also exhibits a decided prejudice towards the Japanese,” as well as other dated aspects that reflect popular culture a century ago. Each of the six novels also involves a murder, a love interest, a wise detective, and a rich tapestry of human nature. Michelewln has authored 1536 stories, 1007 of them for Street Prophets.

Daily Bucket-eer RonK tours Bellingham Bay in The Daily Bucket: Seafood dining on Bellingham Bay with the gulls. A study of three varieties of “somewhat dramatic” gulls and their feeding habits, RonK’s observations showcase the diversity of both wildlife and landscape on Bellingham Bay, found on the eastern edge of the Salish Sea in the Pacific Northwest. Glaucus-winged gulls, he writes, “are omnivorous and major scavengers, dining on first-class seafood (oysters, clams & mussels), and detritus from landfills, garbage cans, and everything in between. One of their favorite feeding routines is to hang out and cruise along a beach and when they see a tasty clam or oyster, they flutter down and snatch it.” Bonaparte’s Gulls, meanwhile, are “fast and agile and remind me of little torpedoes the way they bomb around. When fishing they skim along the water, and when they spot a fish, they hit the water fast and are up and gone.” Caspian Terns are literal dive-bombers: “When they spot a fish they slow down and hover for a few seconds. And then they dive. They hit the water straight on, bill first, with the rest to follow. They go all the way under, and then pop up and gone.” What’s common to them all: a love of seafood. RonK has written 99 stories, most for Backyard Science and the Daily Bucket. This is his 39th rescue.

Can the righteous accept ill-gotten money for charity, and if so, how should it be spent? This is the question Tzivia L tackles in The happy hooker memorial john, which takes its name from a creative rabbinic solution after receiving a donation from a repentant sex worker. The question has relevance for today, as organizations and individuals whose ethics, activities, and political activities are abhorrent —think the Kochs, the Sacklers, even Alfred Nobel—nevertheless want to contribute to charities, the arts, and culture. Can ethical people accept tainted money? “The issue is twofold: Whose money do we accept, and whom do we publicly honor?” Tzivia L separates those two questions and tackles them separately in this, her 118th story. This is her 22nd rescue.

Pwoodford visits the Pima Air and Space Museum in Air-Minded: PASM Photoblog XXI, a photo-rich portrait of a museum still on a COVID-19 footing, with a skeleton staff, shuttered snack bar and masks required, none of which limits Pwoodford’s pleasure in showcasing the museum’s new exhibits. “The Space Gallery has been extensively remodeled, and not everything inside is exo-atmospheric; witness the Black Hawk and that odd little Army Snowgoose drone, which uses a parasail for a wing and is launched from a speeding Humvee. The DeHavilland Australia Drover is an interesting addition, a tri-motor from the 1950s, still in service down under.” In addition, the writer shares images of rare planes in different stages of restoration, and looks forward to the time when they’re all air-worthy and on display. Pwoodford, a fighter pilot himself, has written 399 stories, with 71 rescued.

In The metamorphosis is nearly complete: The GOP, mass psychosis & menticide, novapsyche explains that “mass psychosis” is synonymous with a totalitarian mindset, and also synonymous with “menticide,” which is also described as brainwashing: “totalitarianism as a system is one wherein the masses undergo widespread (i.e., shared) psychosis and suffer a corresponding menticide, a condition which allows the minority party in power to consolidate its power base.” This phenomenon goes beyond the cult behavior that the GOP has developed over the past few years. Indeed, she contends that this process of mass psychosis, as evidenced by the punishing of dissidents to the shared lies, including the denial of the Jan. 6 insurrection and the belief that Trump secretly won the 2020 election—all obvious departures from reality— is “a unique danger because, at least here in America, we’ve never seen anything like this unfold here. We need to be especially vigilant, because we don’t know the whereabouts of the landmines.” A member of Daily Kos since 2006, novapsyche has published 24 stories.

Bookgirl celebrates May as Short Story Month with a smorgasbord of fictional delights in Contemporary Fiction Views: Keep it short. She writes, “One of the great delights of reading is inhaling a well-crafted short story.” Subject can vary, as well as characters, theme, and profundity, but a good short story packs a punch: “The opportunity to read one of these stories, set the book down and let it stay in the back of my memory for a few hours, is an opportunity too enriching to pass up.” A proud public school teacher and librarian, bookgirl has written 263 stories, most for her series Contemporary Fiction Views. This is her 99th rescue.

MindMatter’s provocative story, Jen Psaki should leave, is a counterintuitive take on President Joe Biden’s press secretary. Psaki follows a formula in dealing with adversarial press: Prepare for the encounter, anticipate the ridiculous, challenge the questioner’s premise, and turn a silly question into a meaningful discussion. “She just smiles and follows this four-step process and the right-wing … (has) nothing. And they never will have anything because they only deal in platitudes, slogans, falsehoods, innuendo, and statements out of context. Asking them to state relevant facts ends every one of these discussions.” MindMatter has powerful recommendations for Psaki’s second act in government, and recommendations that upend the premise of the title. They joined Daily Kos in 2016 and have published 55 stories.

COMMUNITY SPOTLIGHT is dedicated to finding great writing by Community members that isn’t getting the visibility it deserves.