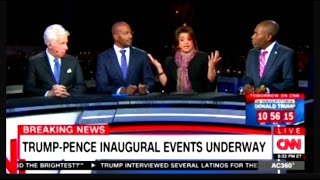 TRUMP Leadership Team: ‘Zero Hispanics, One African-American, How Dare You……..’

On CNN Anderson Cooper 360, the panel weighs in on the much less diverse Cupboard picks for President choose Donald Trump’s administration. CNN Political Commentators Van Jones, Anna Navarro, Jeffrey Lord and Paris Dennard debates in a screaming suit over lack of variety on Trump’s Administration. *Donald Trump’s Inauguration *Trump Inaugural
Read More
We use cookies on our website to give you the most relevant experience by remembering your preferences and repeat visits. By clicking “Accept All”, you consent to the use of ALL the cookies. However, you may visit "Cookie Settings" to provide a controlled consent.
Cookie SettingsAccept All
Manage consent