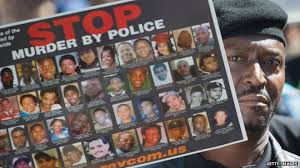 The grand jury, a secret, anti-democratic and coercive tool, has been used repeatedly by prosecutors in the US to indict people whom they want to indict. If you’re called before a grand jury, you have no rights, can’t take a lawyer with you, and you’re compelled to testify or face possible jail time. This process has been used and abused by prosecutors to produce indictments when that is the outcome that the prosecutor wants. It is this history that calls into serious question the prosecutorial conduct in both the Ferguson, Missouri, murder of Michael Brown and the Staten Island, New York, murder of Eric Garner. Any reasonable person of goodwill can see that the death of these two young men should not have happened and that, in both cases, their killers should be brought to justice – at least tried in a court of law#BlackLivesMatter. In both of these cases, there are two critical facts that jump out at you and expose the fundamental contradictions in the criminal justice system: The killers of both victims are white police officers, and the murdered man and boy are Black.

The second fact that gets to the heart of the injustice in the criminal justice system is RACE. The institutionalized racism in the criminal justice system almost always creates an environment where a predominantly white police force is occupying a black community. The history of racial oppression and subjugation of African Americans within the US has created a dynamic where one of the roles of the police has been to enforce that oppression. Thus, historically, white police officers have approached the African American community with a duality of purpose – do their jobs as law enforcement officers, but also maintain their role as a foreign occupying army. This fundamental conflict puts the African American community in an untenable position. On the one hand, we fear the occupying army. On the other hand, when we are victimized by crime, we have no choice but to call the police for help. In many African American communities, calling the police is a matter of last resort because we have had so many examples where we call the police for help only to end up being shot by them. They approach all African Americans as if we are the criminals. Some even refer to us as “animals”.

For decades, the African American community has lived  with the horrible reality of  African American men and boys being killed at the hands of police. This is not new to us. Despite the pronouncements by many that the election of Barak Obama as US President ushered in a post-racial society within the US, the whole world now knows what African Americans have always known. American remains a racist society#BlackLivesMatter.  That racism runs deep throughout her veins and her history. Alas, it is the contradiction in the criminal justice system which once again exposes for everyone to bear witness that the racial subjugation of African Americans remains deeply institutionalized. For African Americans, it is hard to imagine any reforms which can change that reality. That being said, the institutionalization of the special prosecutor mentioned above is a necessary step to bring some  partial relief to the African American community. But that will not be easy to accomplish.

For decades, African Americans have called for the appointment of special prosecutors in such cases. Each time it has been a fight, and  such a prosecutor has only been appointed after a long and intense political mobilization. In both Missouri and New York, the sitting Democratic governor was asked beforehand to make such an  appointment. Despite the obvious reality of the African American vote being the only reliable Democratic vote, they did not. So, there must be a national legislative strategy by the African American community and its allies to force the changes which will guarantee the jurisdiction of special prosecutors at the state or federal level when a white police officer kills an African American. The NAACP, Urban League, Rainbow Push, National Action Network, and all of the progressive organizations in the African American community have to join forces with other national, regional and local organizations, and the more radical organizations in the Black community, to define a state, local and national grassroots legislative strategy for African American voters. Political candidates need to be told in clear terms – if you want our vote, you have to support our agenda #BlackLivesMatter. No more free rides. Those who are loyal and move to enact our agenda should be rewarded. Those who refuse, vacillate, or betray us, need to be punished and made an example of. It’s time for action. And district attorneys running for office have to be told – when it comes to police misconduct, brutality, and police murder of African Americans, no more secret grand juries!

One of the more complex ironies in the American criminal justice system is that after decisions like those made by the Staten Island and St. Louis grand juries, the African American community turns to the federal government for relief. That relief comes from the US Department of Justice. The investigatory arm of the justice department is the FBI. It takes a mobilized public and African American community to force such federal intervention. Elsewhere on this site, we link to video and other research material that documents the historical role of the FBI in destabilizing the black community and subjugating and destroying the Black Movement for social change and freedom. Go here https://www.blackpolitics.org/rbg-how-the-fbi-sabotaged-black-america-a-documentary-by-gil-noble-4/

What is a Grand Jury?
The grand jury process is slightly different than the legal process we typically see.

http://democracynow.org – On Monday St. Louis County Prosecutor Bob McCulloch announced the grand jury had found “that no probable cause exists” to charge Of…

a brief description of what a grand jury does.

Please share this video with your friends or associates who may be in need of legal representation. Check out http://pollardjustice.com video center for more…

Institutional racism is any system of inequality based on race. It can occur in institutions such as public government bodies, private business corporations ( such …

Grand juries in the United States – Wikipedia, the free encyclopedia

The grand jury right may be waived, including by plea agreement. A valid waiver must be made in open court and after the defendant has been advised of the …

Jury service is one of the most important civic duties you can perform. The protection … Were you summoned to federal jury service? Each district … Grand Jury …

The Iron Fist and the Velvet Glove: An Analysis of the U.S. Police
Center for Research on Criminal Justice, Susie Bernstein, published 1977, 232 pages

What is Institutional Racism?

Individual racism consists of overt acts by individuals that cause death, injury, destruction of property, or denial of services or opportunity. Institutional racism is  …

Mar 23, 2012 … LZ Granderson says the way police have mishandled the Trayvon Martin killing shows less … For the black community, this is familiar territory.

May 28, 2013 … 1 Black Man Is Killed Every 28 Hours by Police or Vigilantes: America … police brutality and state repression in black and brown communities.