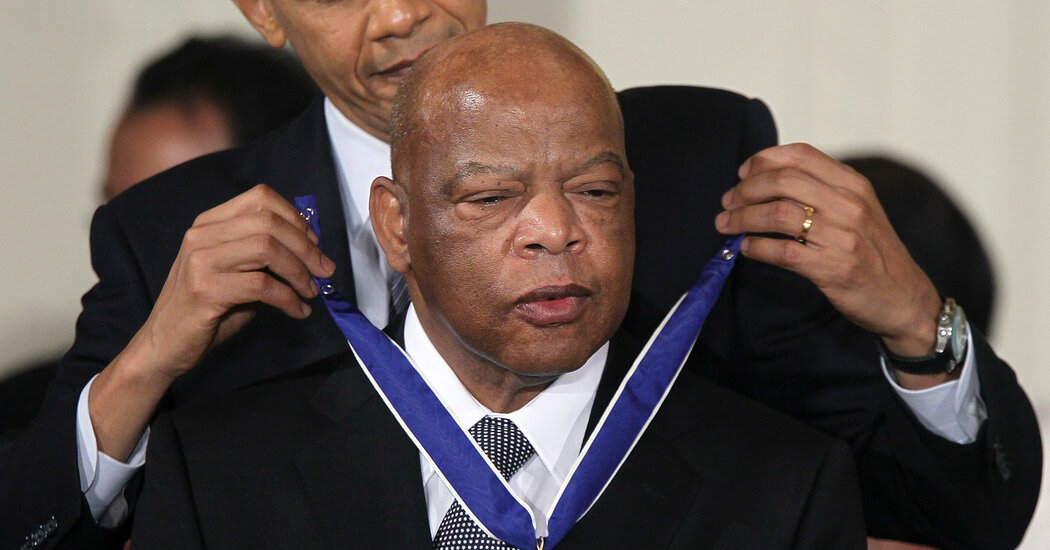 “We have lost a legendary leader, civil rights icon and change agent extraordinaire,” tweeted Representative Hakeem Jeffries of New York, the chairman of the House Democratic Caucus, who is Black. Mr. Lewis, he added, had “altered the course of history and left America a much better place.”“Congressman John Lewis was an American hero — a giant, whose shoulders upon many of us stand,” Senator Kamala Harris, Democrat of California and a former candidate for the party’s 2020 presidential nomination, said in a statement. Mike Espy, a former Democratic congressman and agriculture secretary who is running for Senate in Mississippi, called Mr. Lewis “a hero” as well as a “human saint.”Senator Elizabeth Warren of Massachusetts, another former candidate for the 2020 Democratic presidential nomination, echoed the sentiment.“John Lewis was a true American hero and the moral compass of our nation,” she tweeted. “May his courage and conviction live on in all of us as we continue to make good trouble for justice and opportunity.”In an increasingly polarized Washington, Mr. Lewis managed to gather — and maintain — admirers of all political stripes. Representative Justin Amash, independent of Michigan, who left the Republican Party last year, remembered Mr. Lewis on Twitter as “gentle and strong and kind.” Mr. Amash added: “His message was justice, and his voice was powerful. May his memory be eternal.”Mr. Lewis’s personal history paralleled that of the civil rights movement. A son of sharecroppers, he grew up in dusty Troy, Ala., one of 10 children who picked cotton. He liked to tell the story of how he preached the Gospel to his chickens, often comparing that situation to his time in Congress. (At least the chickens listened to him, he liked to joke.)His life took a turn when, at 18, he wrote to Dr. King. Mr. Lewis was studying at a Baptist seminary in Nashville, but was thinking about trying to integrate his hometown college, Troy State, now Troy University. Dr. King sent bus fare for Mr. Lewis to meet him in nearby Montgomery, Ala.