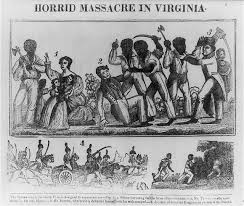 The history of chattel slavery from 1619 to 1863 is a history of African-American slave rebellions. It is a history of resistance to the American slave system.  African captives resisted slavery. The resistance to slavery took various forms. These forms of resistance included insurrections on slave ships during the Middle Passage, sabotaging, maiming and killing animals, non-cooperation, work slowdowns, running away, suicide, and work strikes, to organized slave rebellions.

During slavery, some two hundred and four slave insurrections or slave rebellions occurred.  Slave plots and slave rebellions were recorded in New York as early as 1712 and 1741.  The Stono insurrection in South Carolina in 1720, and again in 1739, created utter fear in the slaveholders.

Probably the largest slave revolt in the United States took place near New Orleans in 1811.  Four to five hundred slaves gathered after an uprising at the plantation of a Major Andry.  Armed with cane knives, axes and clubs, they wounded Andry, killed his son, and began marching from plantation to plantation, their numbers growing.  They were attacked by the U.S. army and militia forces; sixty-six were killed on the spot and sixteen were tried and shot by a firing squad.[2]

Slave rebellions and Resistance continued and became more intense along with anti-slavery agitation by white and African-American (Freedmen or runaways) abolitionists during the years preceding the Civil War. Sectional conflict, both within Congress and in the prairies and streets of America, became so violent, that with the election of Abraham Lincoln as president, the South seceded and attacked the Union.

Economically, slaves were being used increasingly as an industrial labor force for Southern industry prior to the outbreak of the Civil War.[3] So, the question of which way the nation was to go, free labor or slave labor, was a paramount question for the developing white industrial class in northern cities. The combination of the Union Army and African-American ex-slaves (Union soldiers) destroyed the Confederacy and ended slavery. [4]

During the Civil War, at various meetings and through promises from the Union generals, African-Americans came to believe the previous slave plantations would be broken up into individual 40 acre sections, and two mules would be loaned to them by the federal government, for their participation in helping the (North) Union win the Civil War.