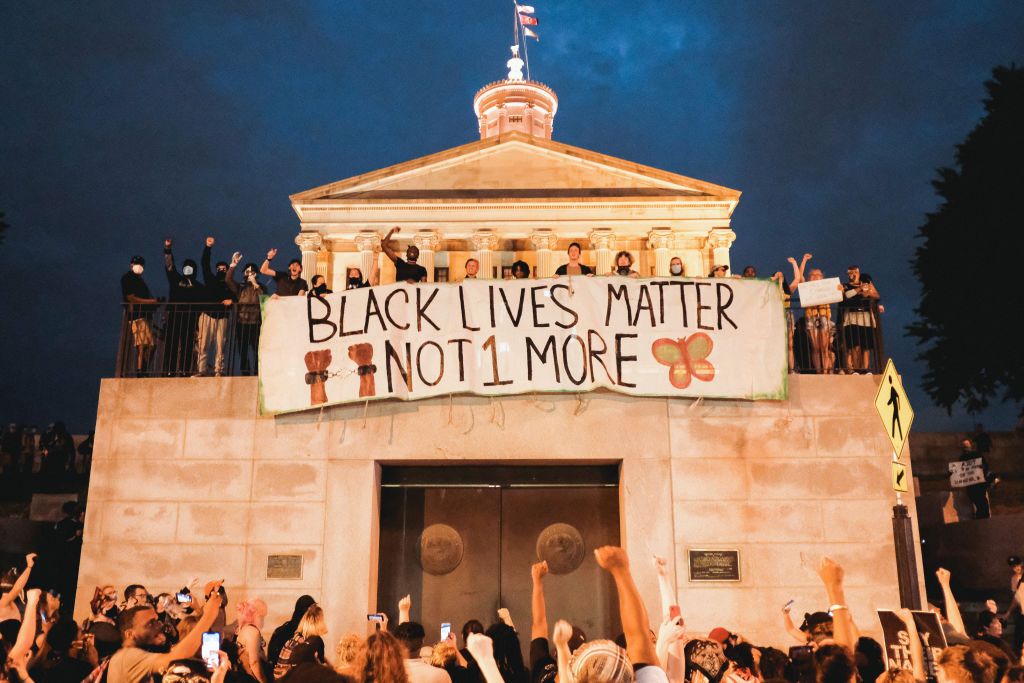 Tennessee ProtestsProtesters are seen marching upon the Tennessee State Capitol building on June 4, 2020 in Nashville, Tennessee. Credit – Jason Kempin/Getty ImagesA new Tennessee law, signed by the governor this week, makes it a felony for protesters to camp out overnight on state property. If convicted, they could lose their voting rights and face up to six years in prison.Although some states are moving towards restoring voting rights for felons, it remains illegal for felons to vote in Tennessee.For more than two months, dozens of people had been sleeping outside the state capitol as they protested day and night against police brutality and pushed (unsuccessfully) to speak with Tennessee Gov. Bill Lee. “We want to see Governor Lee. We don’t wanna fight, we just wanna be free,” they chanted. Jonelle Christopher, a member of the People’s Plaza and organizer with the Equity Alliance—a nonpartisan voter organization that builds Black and brown political power—says she has camped out overnight while protesting “at least 30 times” since June. Christopher says protesters would be ready to leave the space if the governor simply agreed to discuss issues, including defunding the police, with them.After some protesters reportedly claimed the area outside the state capitol to be an autonomous zone on June 12, the governor swiftly responded on Twitter, saying that the right to protest would be protected but “autonomous zones and violence will not be tolerated.” He highlighted an existing law that banned camping on state property not intended to be a campground area.Protesters have been largely peaceful in recent months, although one demonstration in late May resulted in protesters setting fires inside and outside a courthouse, the Associated Press reported. Protesters also toppled a statue of Edward Carmack, who has been widely criticized for his racist views, that was located outside the Capitol.Tennessee’s Republican-majority state legislature approved the new measure last week during a brief special session. The governor quietly signed the bill into law Thursday.Story continuesLee did not respond to a request for comment from TIME and has not issued a public statement on the measure. Asked at a press conference why he didn’t meet with protest leaders outside the Capitol, Lee said he has requests to meet a lot of individuals and that he chooses to “meet with those groups that are willing to work together to move forward.”Lee has said the law is needed because of damage to property at some protests. “I think what we saw was a courthouse on fire and businesses being broken into and vehicles being damaged. We saw lawlessness that needed to be addressed immediately. And that was done so,” Lee told reporters Thursday, according to the Associated Press. Camping on state property was previously a misdemeanor; it is now a Class E Felony.Activists and civil rights groups worry that the new law, which goes into effect immediately, not only criminalizes protests and restrains free speech but also that it punishes being homeless. The ACLU, which had called on Lee to veto the legislation, says the new measure would “make it a felony for a homeless person to sleep on state property, forcing unhoused people onto private property.” An individual could be charged with a felony and a minimum of 30 days in jail upon arrest simply for trying to intervene “when they witness a a police officer using excessive force” the ACLU adds.“In a critical moment of reckoning that has led to policing reforms nationwide, Tennessee has chosen to turn a blind eye to the reasons the protests are happening and is instead choosing to shut down the right of the people to protest,” Hedy Weinberg, ACLU of Tennessee executive director, said.Some civil rights group have spoken out about the law’s effects on voting rights. Lawyers’ Committee for Civil Rights Under Law president Kristen Clarke told the Washington Post that “to criminalize protest activity and disenfranchise voters on top of it defies principles that lie at the heart of our Constitution.” Clarke told the Post her organization is considering suing over all the voter intimidation tactics by Republicans in Tennessee.Although the ACLU has said they will be “closely monitoring” the law’s enforcement, some protesters are demanding more aggressive legal action. Justin Jones, an organizer with People’s Plaza, which was created out of recent protests, said Saturday on Twitter that ACLU’s “monitoring isn’t enough” and that they “need action.” He said they have met with the organization’s attorneys for a month already and is continuing to speak with other civil rights lawyers about pursuing a lawsuit.Jones says he has been arrested seven times in protests over the last few months. For him the new law’s message is clear: “the priority was stopping protesters, instead of looking at what caused the protests in the first place.”He says up to 100 people would be showing up daily from June 12 through to Aug. 12 and he has frequently posted videos of state troopers cracking down on peaceful protesters.Jones says he and protesters want to speak with the governor about systemic racism, police brutality and defunding the police. He highlights a recent case in which a Black man was beaten by sheriff’s deputies on May 23, just two days before George Floyd was killed by police in Minnesota.Jones has been organizing around race and justice issues for seven years in Nashville and says he has “never seen such an aggressive response by the state” in terms of the number of troopers dealing with protesters, arrests and laws like the new measure.”The Tennessee governor’s actions have caught national attention. Massachusetts Rep. Ayanna Pressley called Tennessee’s new law “unconstitutional and against the law,” highlighting its impact on the ability of some protesters to vote. Ibram Kendi, National Book Award winner and author of How to Be an Antiracist, said the measure would not be equally applied to white people “demonstrating for the freedom to infect us, to own assault rifles, to keep monuments to White supremacy.”