HomeBlack HistoryWho Are The Moors

Who Are The Moors:

Explore the Truth about when Black Men Ruled the World

Many historians have said the Moors were the group that brought the Western world out of the Dark Ages – making a significant impact on the current day world. In English usage, the term usually refers to a Moroccan or, formerly, a member of the population of what is now Spain and Portugal.  Any study of the history of Spain during Roman times, from 711 to 1472, must begin with an understanding of the Moorish people. This era is sometimes referred to as the time of the Moors. What is clear beyond a doubt is that you can’t dig deep into the history of Europe without uncovering the Moorish people. And, when you follow the historical references, it is crystal clear that the mighty men who ruled the world in ancient times were, unmistakably, Black men, or Africans.

What is also clear is that these men had traveled the entire globe, bringing their civilization to the Americas long before Columbus. In fact, there is documentation that both the maps and the navigators used by Columbus to find the Americas were Black or African or, as some claim,  Moorish. What needs to be researched more thoroughly is whether these mighty black men who once ruled the world were, indeed, the Moors. If they indeed were, then, history is due for a major rewrite. A tremendous conspiracy of history has turned the truth upside down,  creating the false impression that the Black people were ignorant slaves and the white people were the ones who brought civilization.

Do the research yourself. Start with the links below and follow them where they lead.  Your mind will literally be blown. Uncover the real history of these mighty Black Men who once ruled the World. Are these men, the Moors? The video above makes one claim. However, the videos below point to something else entirely. You decide. Do some research yourself. Worth exploring are books about Spain prior to 700 A.D. There is considerable evidence of an African presence in Spain pre-Columbus.

The geography makes sense because Spain is directly across from the Gibraltar Straits, on the other side of which is, North Africa. The Strait of Gibraltar, also well-known as the Straits of Gibraltar, is a narrow body of water that joins the Atlantic Ocean to the Mediterranean Sea and divides the Iberian Peninsula in Europe from Morocco in Africa.  In ancient times, there was also a section of Spain known as Iberian Ethiopia. In fact, it is known in European history that Ethiopia sent delegations to the Iberian peninsula. African kingdoms were known, in pre-Columbian times, to send diplomatic delegations to Europe, in general, and Spain, in particular.

Despite the racism of today which would have you believe that Black people are inferior to white people, European history and culture tell the true story. One of the most popular mentions is in Shakespeare’s play The Tragedy of Othello, the Moor of Venice. The Europeans of the Middle Ages used the term to refer to the Muslim people in Spain.

The objects featured here all include the head of a moor, or black African, in profile. The use of the ‘moor’s head’ as a heraldic device dates from the 13th century …

The Moors invaded the Iberian Peninsula in 711 and called the territory Al- Andalus, an area which at its peak included what is today Gibraltar, most of Spain and … 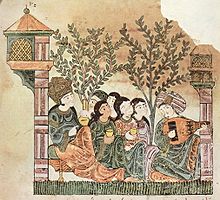 Tags:Moors
We use cookies on our website to give you the most relevant experience by remembering your preferences and repeat visits. By clicking “Accept All”, you consent to the use of ALL the cookies. However, you may visit "Cookie Settings" to provide a controlled consent.
Cookie SettingsAccept All
Manage consent