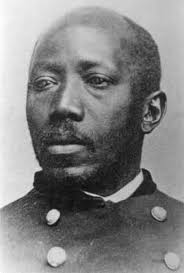 In recognition of Martin Delany’s 19th century emergence as the Father of black nationalism, Frederick Douglass is famously quoted as saying, “I thank God for making me a man, but Delany thanks Him for making him a black man.”

Martin R. Delany spent his life working to end slavery. He was a successful physician—one of the first African Americans admitted to Harvard Medical School—who used his influence to educate others about the evils of slavery with a number of abolitionist publications.

Martin Delany was born free on May 6, 1812, in Charles Town, Virginia, now in West Virginia. The youngest of five children, Delany was the child of a slave and grandson of a prince. All of his grandparents had been taken from Africa and enslaved. According to history, Martin Delany’s paternal grandfather was a village tribal chief and his maternal grandfather, a Mandingo royal. Pati, his mother, was a seamstress.

Pati believed in teaching her children. However, she got in trouble for training them to read and write. Virginia was a slave state. She quickly moved the family to Chambersburg, Pennsylvania.

Delany continued what his mother had started. When he was 19, he walked the 160 miles to Pittsburgh. There, he went to the Bethel Church school for blacks and Jefferson College. He pursued his studies in Latin, Greek and the classics. Martin Delany also trained in medicine under several abolitionist doctors.

In Pittsburgh, Delany became active in the abolitionist movement. He was the leader of the Vigilance Committee. Like the Underground railroad, the Vigilance Committee helped relocate escaped slaves. Delany also was a founder of the Young Men’s Literary and Moral Reform Society. And he was an active member of an integrated militia which protected the black community against white mobs.
He journeyed across the country, stopping in the Midwest, New Orleans, Arkansas, and the Choctaw Nation. Eventually, he married Catherine Richards, the daughter of a rich merchant.. They had 11 children.

The Emancipation Proclamation gave Delany hope that African Americans could remain in the US and not have to return to Africa. He encouraged African Americans to join the Union Army as freedom fighters, even recruiting one of his own sons, Toussaint L’Ouverture Delany, to the Massachusetts 54th Regiment.

In 1865, Delaney met with President Abraham Lincoln to discuss the possibility of African-American officers leading African-American soldiers. Delany became the highest-ranking African American in the military up to that point – a Civil War major in the 104th Regiment of the United States Colored Troops.

Delany continued to study medicine. In addition, he founded The Mystery, the first African-American newspaper printed west of the Allegheny Mountains. His anti-slavery articles were printed in other papers. He became well known. After a libel suit against him by Fiddler Johnson, Delany sold the paper.

In 1850, |b5bc106a0e064cef8081e419ceeb8f53| was one of the three first black men to be admitted to Harvard Medical College. After the first term, he withdrew from Harvard because of white protests.

Delaney returned to writing, publishing several books. Among these were: The Origin and Objects of Ancient Freemasonry – Its Introduction into the United States and Legitimacy Among Colored Men; and The Condition, Elevation, Emigration and Destiny of the Colored People of the United States Politically Considered. The latter was a thesis which articulated a concept later embraced by |dbbf54f459298cedcb17b0b11728d08a|, the idea of blacks returning to Africa.

He visited Nigeria in the mid-1850s to find land for African-Americans. Also, he explored Central America and Canada as options. Delany wrote about what he saw there. He then wrote a novel, Blake: Or the Huts of America.

After the Civil War, Delany entered politics. A quasi-biography, Life and Services of Martin R. Delany (1868)—was his launchpad to a position on the Republican State Executive Committee and running for lieutenant governor of South Carolina.

He was an advocate of African-American business advancement. He would screen candidates to ensure they were worthy of Black support. His endorsement helped to elect Wade Hampton governor of South Carolina. He was subsequently appointed a trial judge.

When the Black vote was suppressed during Post-Reconstruction, Delany returned to his Back to Africa advocacy. He became chairman of the finance committee for the Liberia Exodus Joint Stock Steamship Company. In 1879 he wrote Principia of Ethnology: The Origin of Races and Color, with an Archeological Compendium; and Egyptian Civilization, from Years of Careful Examination and Enquiry. In these works he examined in great detail the cultural achievements of the African people. He promoted racial pride. In 1880 he returned to Ohio, where his wife was a seamstress. There, he practiced medicine. His children attended Wilberforce College. Delany died on January 24, 1885. Throughout his life, Martin Delany had become an accomplished abolitionist, physician, newspaper editor, and the pioneer of black nationalism. He is recognized as one of the most influential and successful anti-slavery activists of the 19th century.

Pittsburgh History: Martin Delany
Subscribe to the PG on YouTube: http://bit.ly/LleUxL Pittsburgher Martin Delany was one of the first blacks accepted to Harvard Medical School and a founder …

Martin Delany – Wikipedia, the free encyclopedia
http://en.wikipedia.org/wiki/Martin_Delany
… arguably the first proponent of black nationalism; Martin Delany is considered to be the … scholar Molefi Kete Asante listed Martin R. Delany as among the 100 …

MARTIN DELANY- “FATHER OF BLACK NATIONALISM …
http://yeyeolade.wordpress.com/
Martin R. Delany. (Credit: Moonstone Arts Center). By Cherri Gregg. PHILADELPHIA (CBS) – This is Martin Delany Week, a time to celebrate an extraordinary African-American, known as the father of Black Nationalism. …. Martin R. Delany. The North Star, 8 December 1848. Patriotism consists not in a mere professed love of country, the place of one’s birth – an endearment to the scenery, however delightful and interesting, of such country; nor simply the laws and …

Martin Delany – Wikipedia
http://en.wikipedia.org/wiki/Martin_Delany
He proposed a corps of black men led by black officers who could serve to win over Southern blacks. Martin Robison Delany (May 6, 1812 – January 24, 1885) was an African-American abolitionist, journalist, physician, and writer, arguably the first proponent of black nationalism.

Black nationalism (BN) advocates a racial definition (or redefinition) of … time the Africans were brought ashore in the Americas up to the Revolutionary period.

However, by 1970 the efforts by Black Power nationalists to support African liberation … the Young Lords Party, and the League of Revolutionary Black Workers.

Martin Delany was a radical pre-Civil War abolitionist, black nationalist, explorer of Africa, and veteran of the American Civil War. His father was a slave, and all …

Free at Last? Slavery in Pittsburgh in the 18th and 19th Centuries