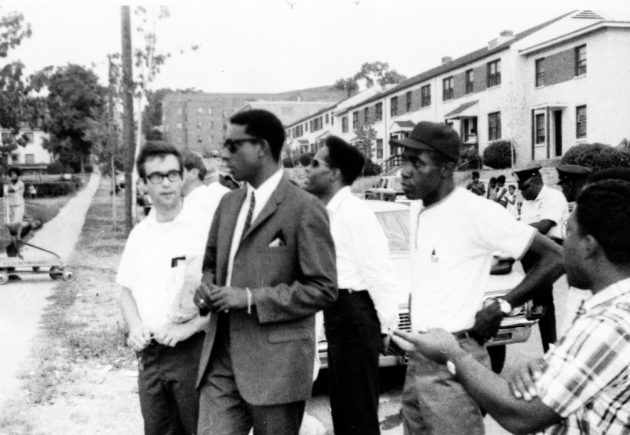 The story of Washington, D.C. is really a collection of story lines, each one focused on a different neighborhood. While some have prospered, others have experienced riots, â€œurban renewalâ€� projects and most recently, the forces of gentrification.

In its new exhibition â€œA Right to the City,â€� the Smithsonianâ€™s Anacostia Community Museum tackles this conflicted history and the current debate over the survival of several Washington, D.C. neighborhoods. It highlights six neighborhoods across the city: Anacostia, Southwest D.C., Chinatown, Shaw, Brookland and Adams Morgan.

â€œThere are probably few issues as urgent and on peopleâ€™s minds in Washington, D.C. today as neighborhood change and gentrification,â€� says Samir Meghelli, the museumâ€™s chief curator and organizer of the exhibition. â€œWe wanted to take the change that is happening in the city now and really delve more deeply into how and why neighborhoods change but also uncover histories of neighborhood organizing and activism.â€� 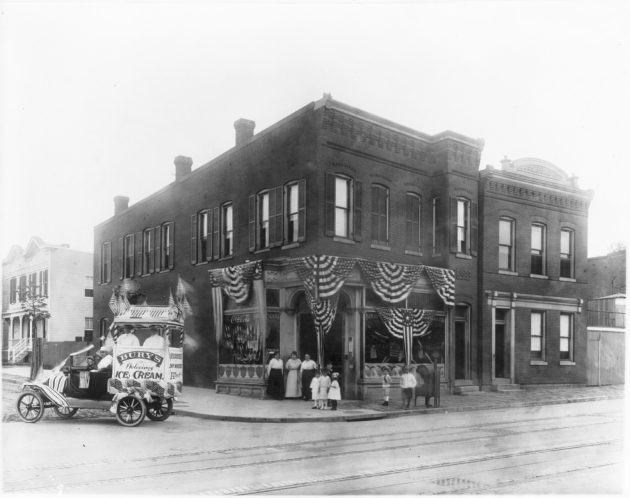 Buryâ€™s Drug Store on Nichols Avenue, ca. 1919, the main commercial thoroughfare of historic Anacostia when it was an all-white neighborhood. Today that street is known as Martin Luther King, Jr. Avenue and Uniontown Bar & Grill occupies the building. (Library of Congress photograph)

Like many D.C. neighborhoods, Anacostia began more than a century ago as an all-white enclave, with African Americans segregated into the nearby sections of Barry Farm/Hillsdale. Video interviews in the exhibition feature longtime African American residents talking about streets they knew not to cross into the white sections of Anacostia.

Originally known as Uniontown, Anacostia was rocked by a 1954 court decision, Brown v. Board of Educationâ€™s little-known companion case Bolling v. Sharpe that ended school desegregation in the District of Columbia. White residents moved to the suburbs and the racial make-up of Anacostia and its schools changed. Class photos from John Phillip Sousa Junior High School show the stark changes from an all-white student body in 1954 to an almost all African American student body five years later.

â€œThere was just this rapid and profound transformation of the neighborhood,â€� Meghelli says. â€œPart of the problem with white flight was much of the resources that had been here, including municipal resources in terms of schools and infrastructure, left with the white residents.â€� 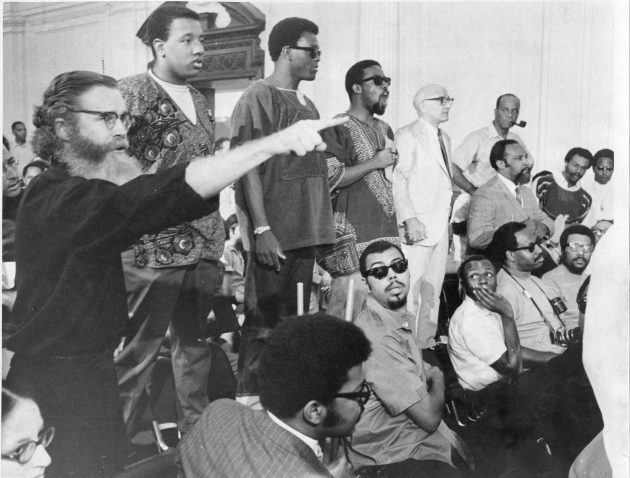 The Emergency Committee on the Transportation Crisis (ECTC), centered in Brookland, standing up for the anti-freeway cause at a D.C. City Council meeting. The ECTC successfully fought the construction of the North-Central Freeway which would have required the demolition of innumerable homes and portions of entire neighborhoods. (1969 photo courtesy D.C. Public Library, Star Collection Â© Washington Post)

Meghelli says desegregation was followed by decades of government neglect, shabby housing and growing poverty, leading to the formation of civil rights groups in Anacostia in the 1960s, such as Rebels with a Cause and the Band of Angels. These groups fought for new public facilities, better housing and more public assistance.

Several new highways, including I-295 and Suitland Parkway, also destroyed hundreds of homes and cut Anacostia off from the rest of the city. 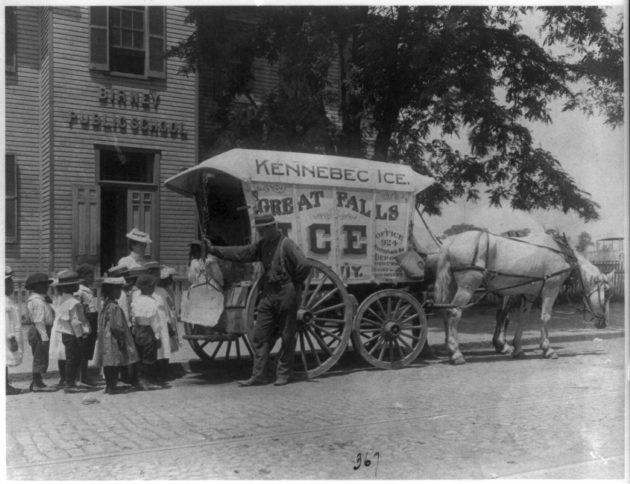 Students of James G. Birney Elementary School, the first public school for African American residents of the historic Barry Farm/Hillsdale neighborhood, line up to peek inside an ice truck in 1899. (Library of Congress photograph)

A crack cocaine epidemic consumed Anacostia and other parts of Washington, D.C. in the late 1980s and early 1990s, leading to the flight of both African American and white residents to the suburbs. The cityâ€™s population, which reached a peak of 802,000 residents in 1950, plummeted for decades to a low of 572,000 residents in 2000. That trend has reversed in recent years as many people have moved back into the city.

As the population has increased, housing prices have skyrocketed in many neighborhoods that have rapidly gentrified, forcing out some long-term residents and allowing only wealthy people to buy houses.

Gentrification occurred first in neighborhoods in Northwest and Northeast D.C.â€” such as Shaw and Brooklandâ€”before spreading to Anacostia, Meghelli says. 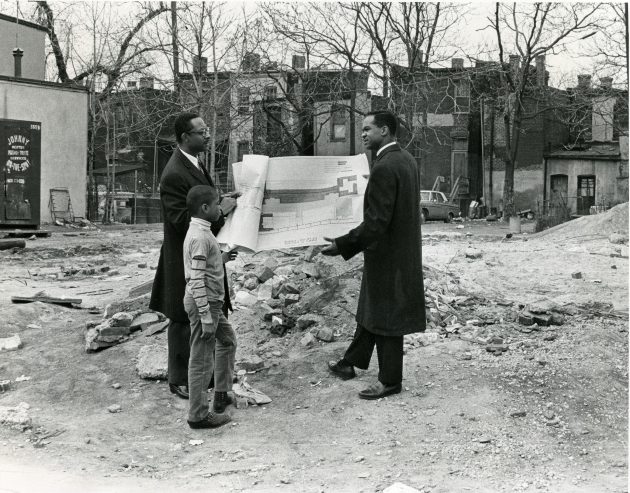 â€œAnacostia has had some of the fastest-rising home prices for several years,â€� Meghelli adds. â€œA lot of change is coming, and people are trying to figure out how to mitigate the displacement that is already beginning to happen.â€�

The need for affordable housing is a major concern, but gentrification also has brought new businesses and developments to Anacostia, including the redevelopment of St. Elizabethâ€™s Hospital into a headquarters for the U.S. Department of Homeland Security and a $65 million entertainment complex and sports arena for the Mystics Womenâ€™s National Basketball Association team. 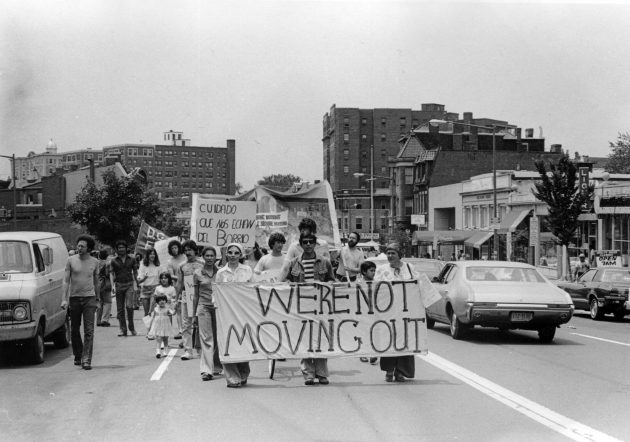 Tenant associations lead a march up Columbia Road NW in protest against threats of eviction at a time when land speculation and residential displacement were growing more common in Adams Morgan and across the city. (1978 Photograph by Nancy Shia)

â€œA Right to the City,â€� also explores community activism successes and failures in other neighborhoods. Southwest D.C. was once a vibrant African American and Jewish neighborhood, but urban renewal projects in the 1950s, 1960s, and 1970s leveled this neighborhoodâ€”its homes, churches and synagoguesâ€”displacing more than 1,500 businesses and 23,000 people.

Continued rapid transformation of many neighborhoods will have profound effects for Washington, D.C.â€™s future, Meghelli says.

â€œWe all are complicit in the change that is happening. Itâ€™s really a question about what decisions we make big and small to help shape that change,â€� he says. â€œWhat lessons might we be able to draw from the cityâ€™s history? We want people to really wrestle with the question of what a more just future for the city would look like.â€�

The post How Washingtonians have shaped and reshaped one neighborhood over more than five decades appeared first on Smithsonian Insider.

Tags:have, neighborhood, over, reshaped, shaped, washingtonians
We use cookies on our website to give you the most relevant experience by remembering your preferences and repeat visits. By clicking “Accept All”, you consent to the use of ALL the cookies. However, you may visit "Cookie Settings" to provide a controlled consent.
Cookie SettingsAccept All
Manage consent