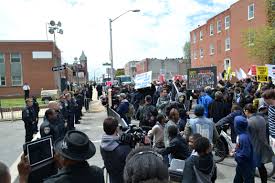 I cried today watching the press conference of Baltimore State Attorney Marilyn Mosby regarding the death of Freddie Gray. As someone who has been involved in the struggle for justice for decades, including helping to lead numerous demonstrations against police brutality and killing of African American men, going as far back as the 1978 killing of black businessman Arthur Miller (shot 24 times by officers in Brooklyn NY’s 77th precinct), it was extremely emotional for me to see a young elected African American prosecutor use the full weight of her office and order the arrest of 6 police officers in the death of Freddie Gray. As I watched Marilyn Mosby exercise the power given to her by the citizens who elected her, the first words that came to my mind were “EARTH SHATTERING”. While this case is far from over, this prosecutor (who, as she stated, comes from five generations of police officers), demonstrated that police officers are not above the law and they can be held liable and accountable for their actions. Contrary to the prosecutorial coverups in Ferguson, Staten Island, and elsewhere, Mosby set an example for the rest of the nation to follow. She could have easily hidden behind a grand jury, but she didn’t. She could have said that the evidence wasn’t conclusive enough to bring charges, but she didn’t. And she could have sat back and let the Baltimore Police Department investigate itself, but she didn’t. She, as she repeatedly emphasized, sent her own investigators into the field immediately and utilized the independent police power of the sheriff’s office to conduct her own investigation. And she filed charges and issued arrest warrants. There are many lessons in the example set by this young prosecutor. The first one is to young people, whom she addressed directly. In so many jurisdictions where young people, in particular, young African Americans are not registered to vote, or don’t vote, the lesson is that, in addition to mass direct action in the streets, you can conduct your own electoral campaigns, focus on local office holding, and elect your own to office. Mosby said directly to young people of Baltimore and America, you elected, me, I am one of you, I hear your calls for, “NO JUSTICE – NO PEACE”, and I need you to exercise peaceful protests while I pursue justice on your behalf. I will have to address some of the other lessons in another post, but for now, listen to the press conference of Marilyn Mosby for yourself.