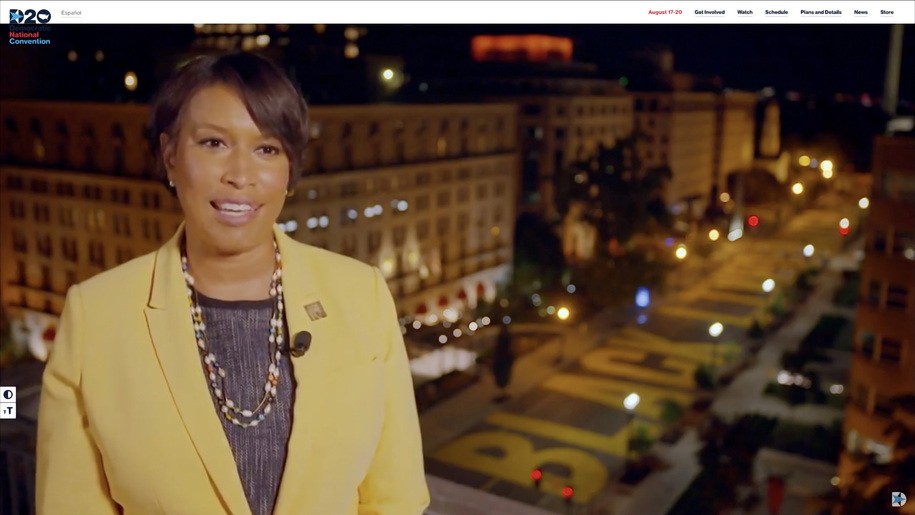 But the movement for Black lives was present throughout the night, not confined to a single moment. Nominees don’t usually appear until the final night of a convention, when they accept the nomination, but Joe Biden appeared Monday night in a recorded conversation about systemic racism with Gwen Carr, the mother of Eric Garner; Chicago Mayor Lori Lightfoot; NAACP President Derek Johnson; Houston Police Chief Art Acevedo; and social justice advocate Jamira Burley. That discussion featured Biden doing a lot of listening, not a role a nominee usually takes on, and definitely not one his opponent in November is known for.

Biden did walk a line there, between the calls by many in the movement to defund the police and his own reformist stance. “Most cops are good,” he said. “But the fact is the bad ones have to be identified and prosecuted and out. Period.”

Washington, D.C., Mayor Muriel Bowser was shown speaking in front of the giant “Black Lives Matter” lettering she had painted onto a street one block from the White House. Her remarks focused on Donald Trump’s occupation of her city with federal troops, and the violent clearing of peaceful protesters from Lafayette Square so Trump could have a photo op in front of St. John’s Episcopal Church.

”If he did this to D.C., he would do it to your city or your town,” Bowser said. “And that’s when I said, ‘Enough’. I said, ‘Enough for every Black and Brown American who has experienced injustice, enough for every American who believes in justice.’” Again, many activists would question the depth of Bowser’s commitment to movement politics. But having her speak directly to this issue at the convention again signaled the central role of not just racial justice but the Black Lives Matter movement specifically in the vision of the United States being laid out in the carefully choreographed DNC.

Tuesday through Thursday nights will show if racial justice was making a one-night-only appearance at the convention or if it will continue to be a theme throughout.

“And when this moment ends, let’s make sure we never stop saying their names,” Philonise Floyd said in introduction of the moment of silence.