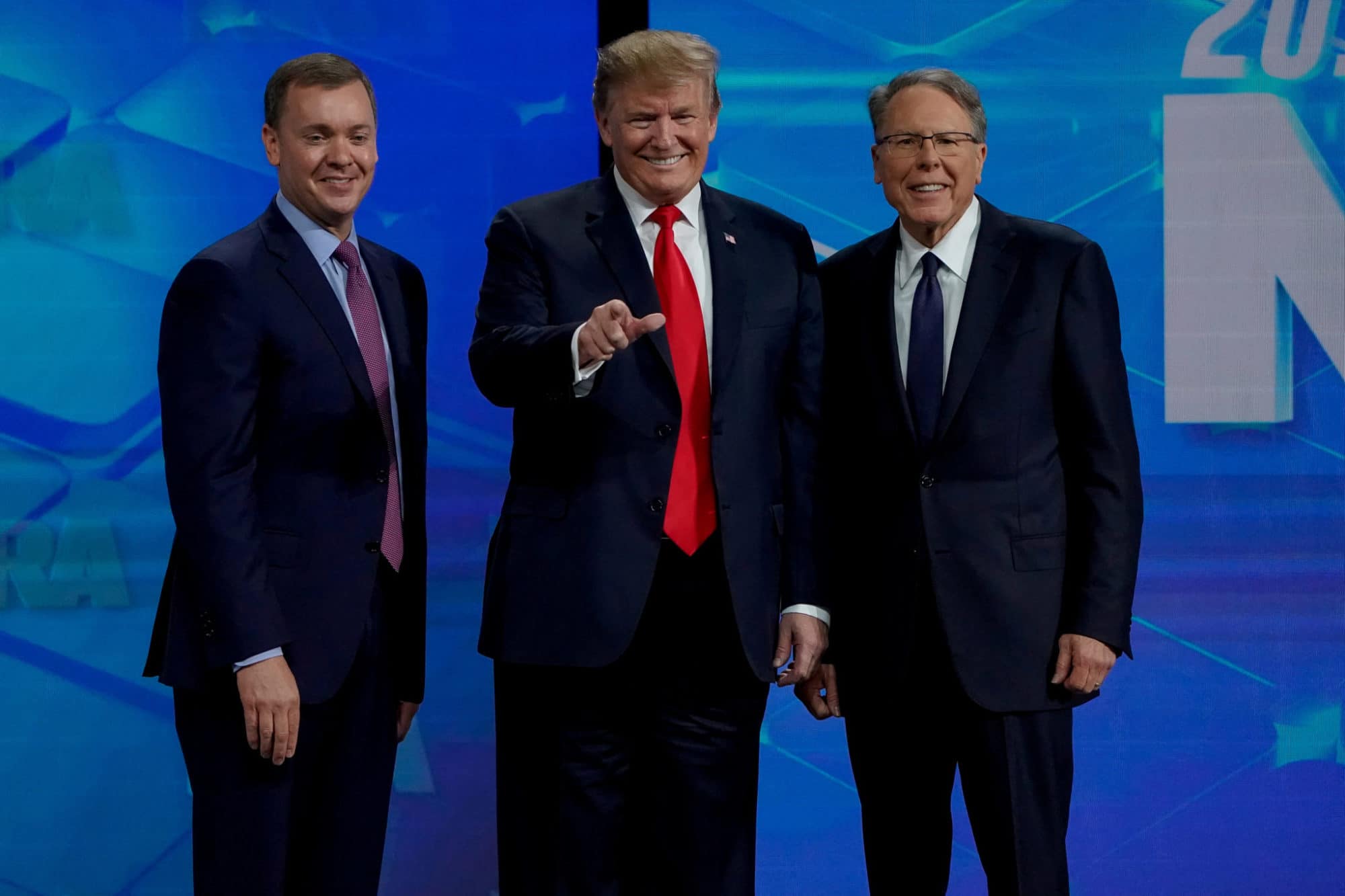 The law was not kind to corrupt people this week.  The DC Circuit sided with congressional oversight when it said the House could sue Don McGahn  if he didn’t comply with a subpoena.  We learned that Deutsche Bank  gave up Donald Trump’s financials to Manhattan prosecutor Cyrus Vance, and the crown jewel came with New York Attorney General Letitia James’s  announcement of a civil suit against the NRA over its corrupt business practices.
It was pretty much a given that Donald Trump, Wayne LaPierre and the NRA would play that tattered victim card – this time claiming that NY AG Letitia James was coming for the Second Amendment.  It’s never about the fraud or the misappropriation of funds.  It’s about all that good charitable work making sure terrorists and people with violent histories can have as many guns as they want.
The NRA is registered as a charitable organization, which means it’s supposed to be a non-profit organization that works toward a public good.  However one may feel about guns, there was a time that the NRA did serve a public good by promoting responsible gun ownership in a manner that benefitted its users and the public at large because actual gun safety was a feature of its activities.

But that NRA is long gone.  Now we have an organization whose only objective is selling guns.  Sell them to terrorists, domestic abusers, white supremacists – disturbed teens who feel like shooting up their classrooms.  Anyone who wants a gun should get one, and as a consequence, gun violence rapidly became an epidemic.  Pre Covid-19, the frequency of mass shootings was accelerating to the point that we didn’t even get through the ritual of dealing with one mass shooting before the next one occurred.
And who can forget that infamous Wayne LaPierre moment when he declared that a good guy with a gun is the best way to deal with a bad guy with a gun.  Dipsy Betsy DeVos declared her support for another NRA policy – guns in the classroom.
This NRA abandoned its membership, whom they only cared about at dues time.  And no wonder, when you use a lobbying organization as a piggy bank to finance a lavish life-style, you need serious money.  The way it got that money is unrelated to the suit at hand, but it is worth noting for the purpose of understanding why Letitia James likely has very solid evidence that corruption is pervasive throughout the NRA organization.
Regardless of how one feels about the NRA, reasonable people can agree that corruption is not a Second Amendment right.
Enter Russia, where citizens do not have the right to gun ownership, but which for some reason developed a fascination with the NRA.   There is plenty of reporting on this curious relationship, but the bottom line is that the NRA has laundered Russian money.  There was a report by the Republican-controlled Senate published last year that Russia doesn’t care about gun rights.

It cares about funneling money to desirable politicians like Donald Trump and it cares about creating mayhem in America.  What better way than to give money to an organization that lobbies for letting as many mass shooters as possible have as many weapons as possible to shoot as many people as possible in as short a time as possible?
The Senate committee revealed a tangle of political issues extending not just to corruption in the NRA but also to an infection of the Republican Party and the Trump campaign.  The lawsuit filed by New York focuses only on corruption by a few in leadership who used the organization’s coffers as a personal piggy bank.  They lived as well as Donald Trump and like Donald Trump they did it with someone else’s money.
As bad as that is, I raise the Russia component to convey how pervasive corruption is in the NRA and that it was there long before the organization’s enthusiasm for Donald Trump.
Letitia James’s suit is a smart way to approach corruption in the NRA because Trump and Barr can’t touch it.  This law suit is under New York law and it deals exclusively with the NRA’s dealings within the Empire State. Once Russia is brought into the equation, there can be jurisdictional issues with an unknown outcome.
Knowing what we know about the current occupant of the White House, it’s small wonder he is still feeling burnt from when New York dissolved his fraudulent charitable organization  and banned Ivanka and Don Jr. from sitting on boards of charitable organizations there.
Trump lost that income stream, and for the same reason, he will feel the burn of losing the NRA income stream.  The New York Attorney General is doing her job, and she’s doing it the way we should expect of all Attorneys-General to.
What Attorney General James may feel about the NRA’s political agenda is beside the point.  This is not about partisan politics.  The NRA could be lobbying for puppies and the suit would still have merit.  The only issue is whether Wayne LaPierre and others named in the suit misused members’ donations.
This is why the rule of law is preferable to the rule of a person.  Under the rule of law a criminal act remains criminal regardless of who does it.
Trump knows on some level that the NRA is as corrupt as his foundation was and he probably knows the NRA is likely to be dissolved.  That’s why he told the NRA to skip town, right?  Isn’t that the sort of advice you could imagine a typical “law and order” president giving?
While we celebrate the fact that the NRA gravy train is being held to account, the political reality is that gun manufacturers will find a new lobbyist for their narrow, deadly interests. Hopefully responsible gun owners will also have a voice.
Ms. Woodbury has a graduate degree in political science, with a minor in law.  She is a qualified expert on political theory with a specific interest in the nexus between political theories and models and human rights.
Based on her interest in human rights and the threats that authoritarian regimes are to them, Ms. Woodbury’s masters thesis examined the influence of politics on the enforcement of international criminal law was cited in several academic studies.
Published work includes case summaries for the War Crimes Research Office.
She has an extensive background doing legal research in international and domestic law.
Ms. Woodbury’s work for politicusUSA includes articles on voting rights, the right to asylum and other civil/human rights.