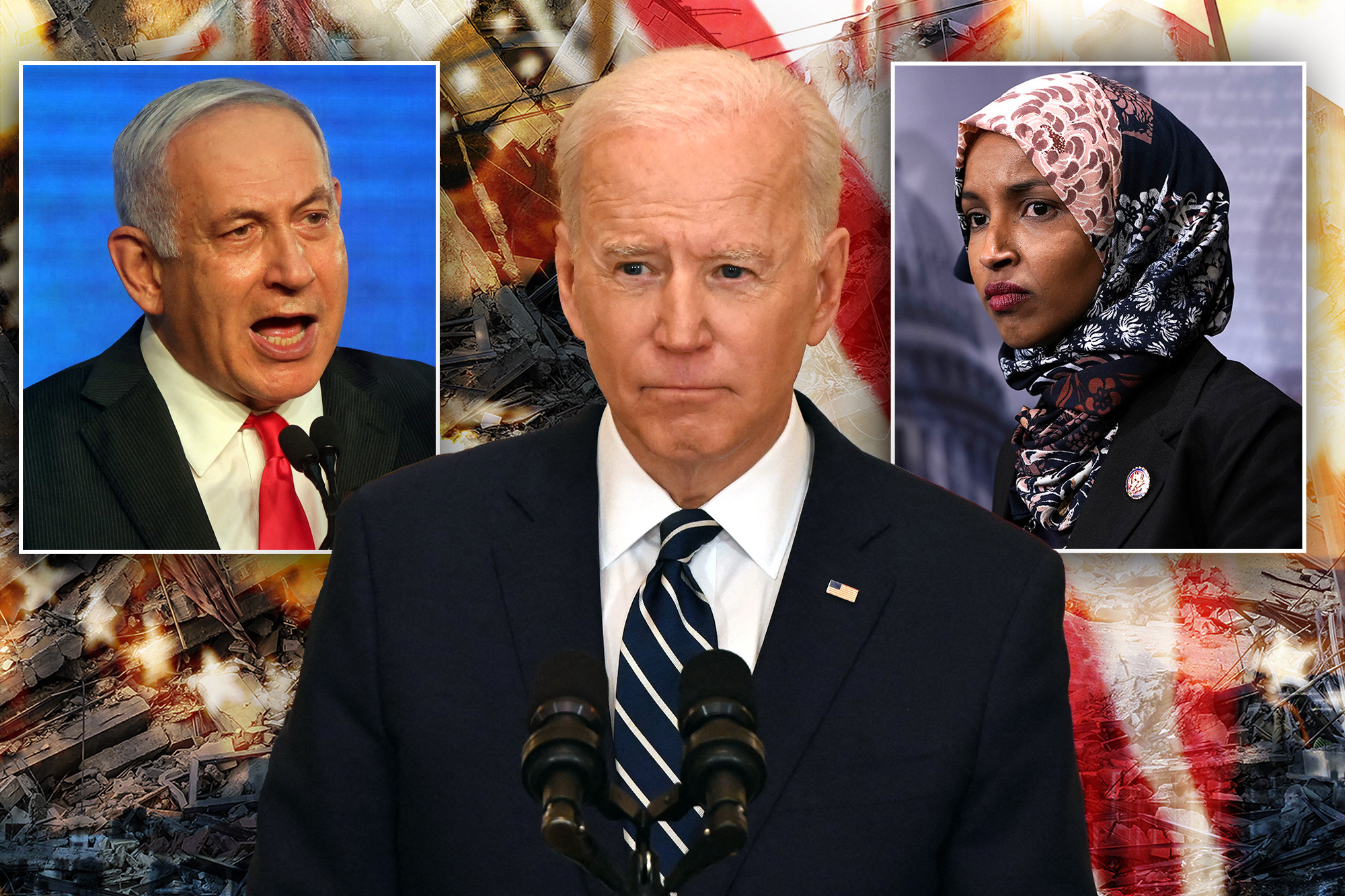 President Biden is facing pressure from warring factions within his own party on how he ought to respond amid an escalating bloody conflict between Israel and Hamas involving thousands of rocket exchanges and ground troops.

On one end of the political spectrum, Republicans are unified in their stance that Israel has the right to defend itself from attacks by Hamas and other Islamic jihadist groups in Gaza and the West Bank.

For Democrats, on the other hand, the issue is causing divisions.

However, those allies are facing considerable pushback from the progressive wing of the party.

President Joe Biden has to deal with division within his own party. AFP via Getty Images

Rep. Ilhan Omar (D-Minn.) went as far as to call the Israeli airstrikes in Gaza “an act of terrorism” in one tweet Monday and accuse Biden of “siding with an oppressive occupation” in another on Wednesday.

Other progressive members of Congress are calling for a shift in US policy toward the Jewish state.

Speaking from the House floor Thursday, Rep. Ayanna Pressley (D-Mass.) argued, “We cannot remain silent when our government sends $3.8 billion of military aid to Israel that is used to demolish Palestinian homes, imprison Palestinian children, and displace Palestinian families. A budget is a reflection of our values.”

Rep. Rashida Tlaib (D-Mich.), who is of Palestinian descent, called on Congress to “condition the aid we send to Israel, and end it altogether if those conditions are not followed.”

“American taxpayer money is being used to commit human rights violations. Congress must condition the aid we send to Israel, and end it altogether if those conditions are not followed. Statements aren’t working @SecBlinken. Enough is enough,” she tweeted on Monday.

While not calling it “terrorism,” progressives such as Sens. Bernie Sanders (I-Vt.), Elizabeth Warren (D-Mass.) and Ed Markey (D-Mass.) all issued statements maintaining opposition to efforts to evict Palestinian families from East Jerusalem, which are tied up in rent disputes.

Rockets are seen in the night sky fired toward Israel from Beit Lahia in the northern Gaza Strip on May 14, 2021.AFP via Getty Images

Whether Israel moves forward with the evictions will depend on how the country’s Supreme Court rules on a case involving missed rent payments.

Sanders called Israel’s jurisdiction “violence and oppression of occupation” in a statement.

“The United States must call for an immediate cease-fire and an end to provocative and illegal settlement activity. And we must also recommit to working with Israelis and Palestinians to finally end this conflict,” he continued.

Explosions, fire and smoke fill the sky during Israeli airstrikes over the southern Gaza Strip in response to the barrage of rockets fired by the Palestinians into Israel.ZUMA24.com

Warren and Markey offered similar sentiments, as did Sen. Chris Van Hollen (D-Md.), who called on Biden to respond to the evictions directly, arguing in a tweet last weekend as tensions were ramping up, “Evictions of families in East Jerusalem would violate international law.

“If the Biden Administration puts the rule of law and human rights at the heart of its foreign policy, this is not a moment for tepid statements,” the Maryland senator wrote.

Speaking to The Hill on Friday, Van Hollen clarified his remarks, given that his previous comments came before Hamas launched a barrage of 130 rockets at Tel Aviv on Tuesday.

“Israel has a right to defend itself, but at the same time the administration needs to make sure we stand up for international law.”

Not all of the Democrats shared that fury with the sole democracy in the Middle East, with many lawmakers coming to Israel’s defense or holding off on judgment on the issue.

Asked about Warren calling the planned evictions “abhorrent,” Schumer said Tuesday that he hoped “both sides can come together and bring peace.”

The comment was a tepid one from one of Israel’s staunchest defenders on the Democratic side of the aisle. Others in the pro-Israel wing of the party went further.

Senate Foreign Relations Committee Chairman Bob Menendez (D-NJ) rejected the categorizations from his fellow pols regarding the lawfulness of evictions being reviewed by a non-US court system.

“I don’t know. I’m not an expert in international law to come to that conclusion,” he remarked, adding, “I’m not about to preempt whatever they decide under Israeli laws.”

Palestinians carry the shrouded body of Raed Alrantisi, killed in an Israeli airstrike, during his funeral in Rafah in the southern Gaza Strip, on May 14, 2021.AFP via Getty Images

“Israel being our biggest partner in the Middle East and the only true democracy, we’ve got to make sure Israel has what it needs to defend itself.”