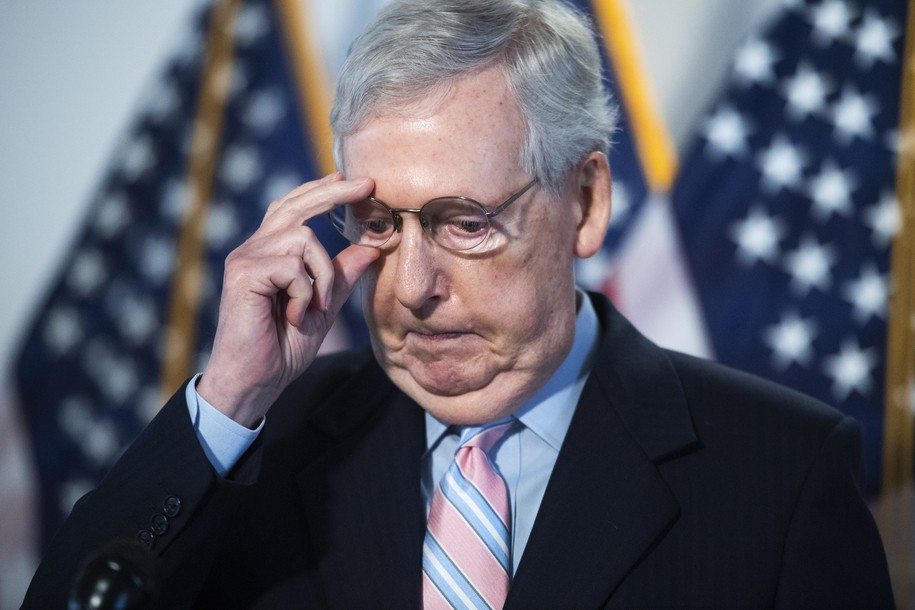 While that is surely true, Republicans have received all corporate opposition to their racist legislative initiatives to curtail voting—particularly among voters of color—as a political attack. In turn, GOP lawmakers appear to be escalating the tensions to a kind of political armageddon.

The most prominent GOP criticism came from corporate money grubber Mitch McConnell himself, who warned early last week that corporations could “invite serious consequences” if they continued to speak out. A day later, he tried to soften that statement a bit, conceding that corporations “certainly are entitled” to speak out politically. “My principal complaint,” McConnell added of CEOs, “is they didn’t read the darn bill.”

Well, hundreds of CEOs and the corporations they represent appear to have defied McConnell on both counts by continuing to speak out even after McConnell had a chance to defend the bill. In fact, a day after Chenault and Frazier outlined the Georgia law for members of the Business Roundtable, a major pro-business lobbying group, a McConnell staffer “briefed its members on the details of the Georgia law.” So even after McConnell’s office presented its best defense of the law, a broad coalition of heavy hitters still eagerly signed on to the statement.

Notably absent, however, were Coca-Cola and Delta, which have condemned the law separately but have also been severely criticized by voting rights activists for making statements that were too little, too late. Home Depot also took a pass. One of its co-founders, Ken Langone, has been a vocal Trump supporter.

But major businesses in other states are taking a more proactive approach to try to curb the worst impulses of their GOP-controlled legislatures. In Michigan, where several voting measures await a Senate hearing, the chief executives of Ford Motor, General Motors, and Quicken Loans joined with more than two dozen other leaders of the state’s preeminent companies to issue a statement opposing any election law changes that suppress votes.

General Motors went even further, releasing its own statement via Twitter. “We are calling on Michigan lawmakers and state legislatures across the nation to ensure that any changes to voting laws result in protecting and enhancing the most precious element of democracy—the right for all eligible voters to have their voices included in a fair, free, and equitable manner,” it read. “Anything less falls short of our inclusion and social justice goals.”

Voting suppression efforts in Texas are also meeting with increasingly vocal opposition from businesses. Houston-based Hewlett Packard Enterprise strongly condemned any restrictive efforts. “We categorically oppose any legislation that unfairly seeks to restrict the right of our team members or any American to vote in fair, accessible and secure elections,” the company wrote. Houston, with its heavy concentration of Black voters, has become a target for the suppression efforts of GOP state lawmakers—particularly after Harris County officials worked diligently to expand voting access in 2020 due to the pandemic.

Meanwhile, Republican lawmakers nationwide are treating the new atmosphere like a free-for-all in attention-getting corporate bashing.

On Tuesday, Sens. Mike Lee of Utah, Ted Cruz of Texas, and Josh Hawley of Missouri announced an effort to punish Major League Baseball (MLB) by removing its antitrust exemption. Cruz decried “woke corporations” for becoming a “political enforcer for Democrats,” while Hawley declared MLB a good place to start with “a new round of trust-busting in the United States.” Donald Trump has called for boycotts of MLB and other companies he considers disloyal to him. And Sen. Marco Rubio of Florida decided April Fools’ Day was the perfect day to release a video calling Delta and Coca-Cola “woke corporate hypocrites.”

Get ready for more a lot more grandstanding now that so many of the nation’s most prominent corporate executives are presenting a united front against Republican efforts to suppress the votes of the voters they don’t like. With no single ideology or set of principles anchoring the Republican Party, it’s just a race to the bottom now for everyone who’s even flirting with the idea of running for higher office, particularly presidential bids. In essence, any attention is good attention in a party no longer concerned with anything beyond promoting a lifestyle brand designed to enthuse Trumpers.