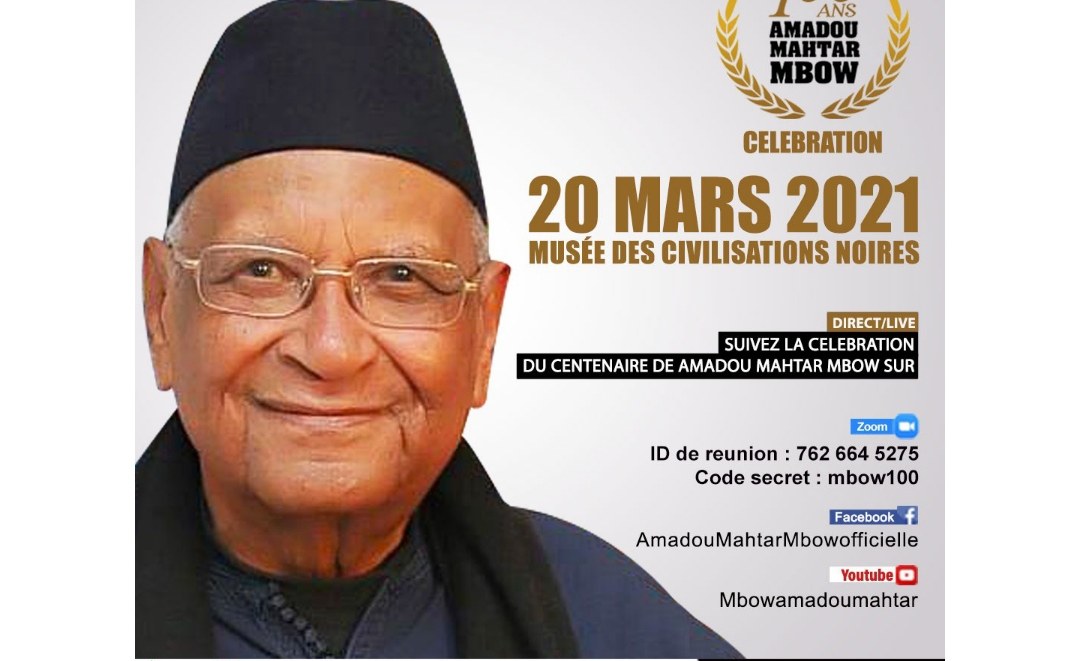 Dakar — Africa’s heads-of-state are joining prominent members of Africa’s intelligentsia to mark the 100th birthday of Professor Amadou Mahtar Mbow by chronicling his contributions as the first black African to head Unesco and many other achievements.
“The person whose centenary we are celebrating today is a fighter, a leader who can inspire all generations and in all areas,” said Ibrahima Fall, an international civil servant, who heads the Organising Committee for the Centenary of Professor Amadou Mahtar Mbow.
Fall addressed media on March 17 at the Museum of Black Civilizations (Musée des Civilisations noires) in Dakar to give outline of the celebration, which launch on March 20. The committee unveiled the African intellectuals who are committed to showcase the life and work of a man who has inspired many generations.
The chair of the scientific committee, Professor Penda Mbow, announced the participation of figures from around the world who will lead international symposium and a series of webinars scheduled during the period from March 2021 to March 2022.

She announced that Pedro Pires, former president of Cape Verde,  and writer and Nobel Prize winner Wole Soyinka will speak about the many contributions made by Mbow.
Professor Penda Mbow herself will address the theme “Amadou Mahtar Mbow: a dynamic vision of education.”
For their part, Souleymane Bachir Diagne and Hamady Bocoum will share their experience on the “restitution of cultural property.” Professor Mamadou Diouf will address “questions on African cultures.”
Professors Edwy Plenel and Doudou Diène will elaborate on “The Visionary: History and Actuality of Nomic” – a  theme which – according to Fatou Mboup, chair of the Committee on Organization and Communication – is relevant to current developments, given the democratisation of access to information noted in Africa and throughout the world.

Former Senegalese Prime Minister Mamadou Lamine Loum will tackle “The political and civic engagement” of Mbow, especially his commitment during the National Conferences and the CNRI (Commission nationale de réforme des institutions – National Commission for Institutional Reform).
The young guard composed of Professor Hamidou Anne, Aminata Kane (granddaughter of Mbow) and Alyune Blondin Diop will speak about “The message for the youth in the life and work of Mr. Amadou Mahtar Mbow.”
This is a burning issue, in the light of the recent events which took place in the country showing that the concerns of the youth must be a priority in the progress of a nation under construction.
The international symposium will be backed by a vernissage which, according to Prof. Babacar Bouba Diop, historian and chair of the Committee in charge of this activity, will mark the beginning of a exhibition schedule to travel around the country and the world for the next year.

Diop points out that the first exhibition will be at the Museum of Black Civilizations from March 20 to April 20, 2021.

During celebration of the centenary that will take place over a one-year period, strong messages are also expected during the series of webinars scheduled from Saturday, March 27 to Saturday, May 29, 2021.
A booklet will be launched by extending the message for “the youth in the life and work of Mr. Amadou Mahtar Mbow” that will be delivered by Alyune Blondin Diop, Hamidou Anne, Aminata Kane and Souleymane Diallo.
The distinguished professors Souleymane Bachir Diagne, Hamady Bocoum, Felwine Sarr, Pap Ndiaye and Charles Moumouni will debate on the “Restitution of Cultural Property”.  This subject is at the heart of international geopolitics with the commitments made by France to African countries.
Profs. Mamadou Diouf, Ibrahima Wane, Maréma Touré, Younouss Sèye and Amadou Ly will provide answers to “Questions on African cultures.”
“The Visionary: History and Current Affairs of Nomic” will be at the heart of exchanges between Edwy Plenel, Doudou Diène, Amadou Mahtar Ba, Eugénie Rokhaya Aw and Khadijatou Tall Samb.
Ms. Marie-Louise Corréa, Mr. Abdoulaye Élimane Kane, Prof. Abdou Salam Sall, former Rector of UCAD and Mr. Moussa Mbaye will debate on “Philosophy and action of secular scouting in the life and work of Mr. Amadou Mahtar Mbow.”
The emeritus professors Abdoulaye Bathily, Théophile Obenga, Thierno Moctar Bah, Boubacar Barry, Rokhaya Fall, Adam Ba-Konaré and Babacar Diop a.k.a. Buuba will deal with “Amadou Mahtar Mbow and the rewriting of African History.”

The former Prime Minister Mamadou Lamine Loum will revisit the political and civic engagement (National Conferences and CNRI). But he will be backed by Professor Babacar Kanté, Abdoulaye Dièye and Pape Demba Sy.
The founder of the think tank Africa Jom Center, Mr. Alioune Tine, along with Pierre Sané, Mame Penda Ba, Selly Ba and Pape Ibrahima Kane will debate on the theme “Amadou Mahtar Mbow and human and citizen rights.”
The last virtual panel that will be held on “Amadou Mahtar Mbow and the emancipation of peoples in Africa and the world” will be moderated by Ebrima Sall, Jean-Bernard Ouedraogo, Barka Ba and Vincent Foucher.
The Organising Committee for the centenary of Amadou Mahtar Mbow indicated that the official ceremony of March 20 will be addressed by President of Senegal Macky Sall, King Mohamed VI of Morocco, President of Guinea Alpha Condé, President of Niger Mahamadou Issoufou and President of Burkina Faso Roch Marc Christian Kaboré.
Former heads of state as well as national and international political and scientific figures are also expected to participate.