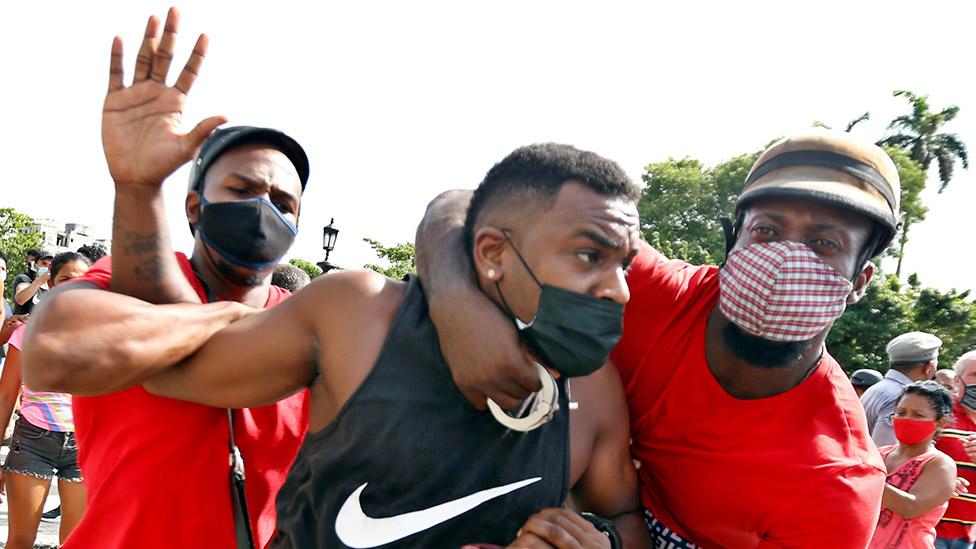 Thousands of Cubans have joined the biggest protests for decades against the island’s Communist government.They marched in cities including the capital Havana, shouting, “Down with the dictatorship!”.Images on social media showed what appear to be security forces detaining and beating some of the protesters.Cubans have been angered by the collapse of the economy, as well as by restrictions on civil liberties and the authorities’ handling of the pandemic.The protesters were demanding a faster coronavirus vaccination programme after Cuba reported a record of nearly 7,000 daily infections and 47 deaths on Sunday.Last year, Cuba’s largely state-controlled economy shrank by 11%, its worst decline in almost three decades. It was hit hard by the pandemic and US sanctions.Thousands of pro-government supporters also took to the streets after the president went on television to urge them to defend the revolution – referring to the 1959 uprising which ushered in decades of Communist rule.President Miguel Díaz-Canel said the protests were a provocation by mercenaries hired by the US to destabilise the country.”The order to fight has been given – into the street, revolutionaries!” he said in an address on TV.The top US diplomat for Latin America, Julie Chung, tweeted: “We are deeply concerned by ‘calls to combat’ in Cuba.”The White House has said it stands with the Cuban people, and called on those in government to “hear their people and serve their needs” rather than their own.”The Cuban people are bravely asserting fundamental and universal rights,” President Joe Biden said in a statement.Map of Cuba protests’There is no freedom’The anti-government protests began with a demonstration in the city of San Antonio de los Baños, south-west of Havana, but soon spread throughout the country.Many were broadcast live on social networks, which showed marchers shouting slogans against the government and the president, and calling for change.Story continues”This is the day. We can’t take it anymore. There is no food, there is no medicine, there is no freedom. They do not let us live. We are already tired,” one of the protesters, who gave his name only as Alejandro, told the BBC.Posts on social media showed people overturning police cars and looting some state-owned shops which price their goods in foreign currencies. For many Cubans, these shops are the only way they can buy basic necessities but prices are high.Some protesters targeted police vehicles and state-owned shopsAnalysis – protests show growing angerBy Vanessa Buschschluter, Latin America and Caribbean editor, BBC News Online While the crowds of protesters do not look particularly large, the significance of thousands of Cubans taking to the streets across the country can hardly be overstated.Shouting “Freedom!” and “Down with Communism!” may be considered tame in other parts of the world, but doing so on the tightly controlled Communist-run island can easily land you in jail.The fact that people are daring to do so in small towns where they can be easily identified by the Communist authorities shows the levels of anger fuelling these protests.And with protesters live-streaming footage on social media sites, the government is finding it hard to hide evidence of the discontent.A video uploaded by the Cuban foreign minister showing government loyalists marching and shouting “These streets belong to Fidel [Castro, the late Cuban revolutionary leader]” was quickly countered by government critics sharing footage of the protests.Cuba’s economy is struggling. Tourism, one of the most important sectors, has been devastated by the restrictions on travel during the Covid pandemic.Sugar, which is mostly exported, is another key earner for Cuba. But this year’s harvest has been much worse than expected.Cuba’s sugar monopoly, Azcuba, said the shortfall was to blame on a number of factors, including a lack of fuel and the breakdown of machinery which made bringing in the harvest difficult, as well as natural factors such as humidity in the fields.As a result, the government’s reserves of foreign currency are depleted, meaning it cannot buy in imported goods to supplement shortages, as it would normally do.Queues for food have been growing. In addition, power shortages have led to blackouts for several hours a day.Some of the demonstrators sang Patria y Vida (“Fatherland and Life”), a rap and reggaeton hit. Its title plays on a slogan – Fatherland or Death – which dates back to the 1950s, when the late Fidel Castro’s revolutionaries overthrew the government.