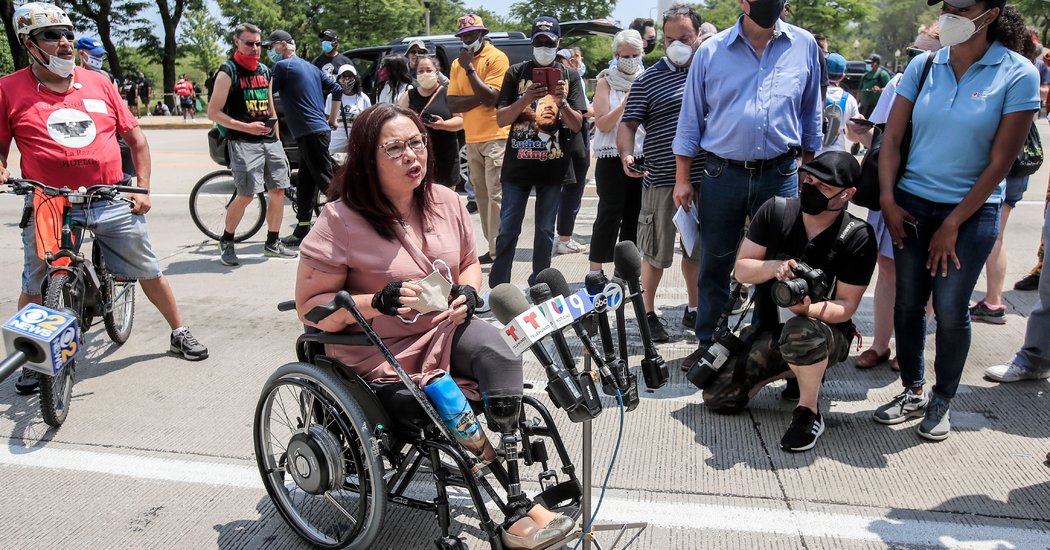 Senator Tammy Duckworth of Illinois, a Thai-American Democrat who lost both of her legs fighting in the Iraq war and is now a potential vice-presidential nominee, was targeted with nativist smears for the second night in a row on Tuesday by Fox News’s Tucker Carlson.Mr. Carlson, whose broadsides have been amplified on Twitter by President Trump, has attacked Ms. Duckworth in his monologue for suggesting during a Sunday interview on CNN that it was worth discussing the value of removing monuments of George Washington, the nation’s slave-owning first president.On Tuesday night Mr. Carlson labeled Ms. Duckworth, who was born in Thailand to a Thai mother of Chinese descent and a white American veteran father, and the Somali-born Representative Ilhan Omar of Minnesota as “vandals” who hate the United States because they have called attention to its historical racism and inequities.“There are many of us here who do like this country,” Mr. Carlson said, as a graphic on the screen read, “We have to fight to preserve our nation & heritage.”“We live here,” he said. Then, adopting language used for a century by those aiming to restrict the country to people of Northern and Western European ancestry, he added: “We don’t want to destroy it. We have every right to fight to preserve our nation and our heritage and our culture.” “And when vandals like Tammy Duckworth and Ilhan Omar tell us that we’re not allowed to question their patriotism, even as they scream about how horrible America is, we have every right to laugh in their faces, and we should,” Mr. Carlson said. Mr. Carlson also called Ms. Duckworth a “moron” on Tuesday night, saying that to people like her, ”Washington is just some old white guy who needs to be erased.”He added: “Let’s tear down our statues, rename our capital city Sharpton or Mandela and let the revolution continue. Tammy Duckworth is not a child, at least not technically; she is a sitting United States senator.”Mr. Carlson’s comments in recent months have drawn growing criticism even as his ratings have remained strong — the best on his network in June. Advertisers, under pressure to disassociate themselves from his show, have fled to other Fox News programming.Nativist attacks on Democratic women of color in Congress are hardly new for Mr. Carlson and Mr. Trump. Ms. Omar was one of four Democratic women who were the target of “send her back” chants at a Trump rally in North Carolina nearly a year ago. She is also, along with Representative Alexandria Ocasio-Cortez of New York, featured in a scores of Republican television ads and political mailers as examples of what the party’s candidates are fighting against.Former Vice President Joseph R. Biden Jr., who is weighing adding Ms. Duckworth to his presidential ticket, defended her during an online fund-raising event with her Tuesday night.Apparently referring to Mr. Trump’s sharing the clip of Mr. Carlson’s Monday night monologue, Mr. Biden said: “I can’t tell you how I felt today when I heard the president of the United States, Donald Trump, questioning your patriotism. I found it virtually disgusting, sickening.”He added, “It’s a reflection of the depravity of what’s going on in the White House right now.”Ms. Duckworth did not address Mr. Carlson during the Biden fund-raiser, but on Twitter on Monday night she invited him to “walk a mile in my legs and then tell me whether or not I love America.”