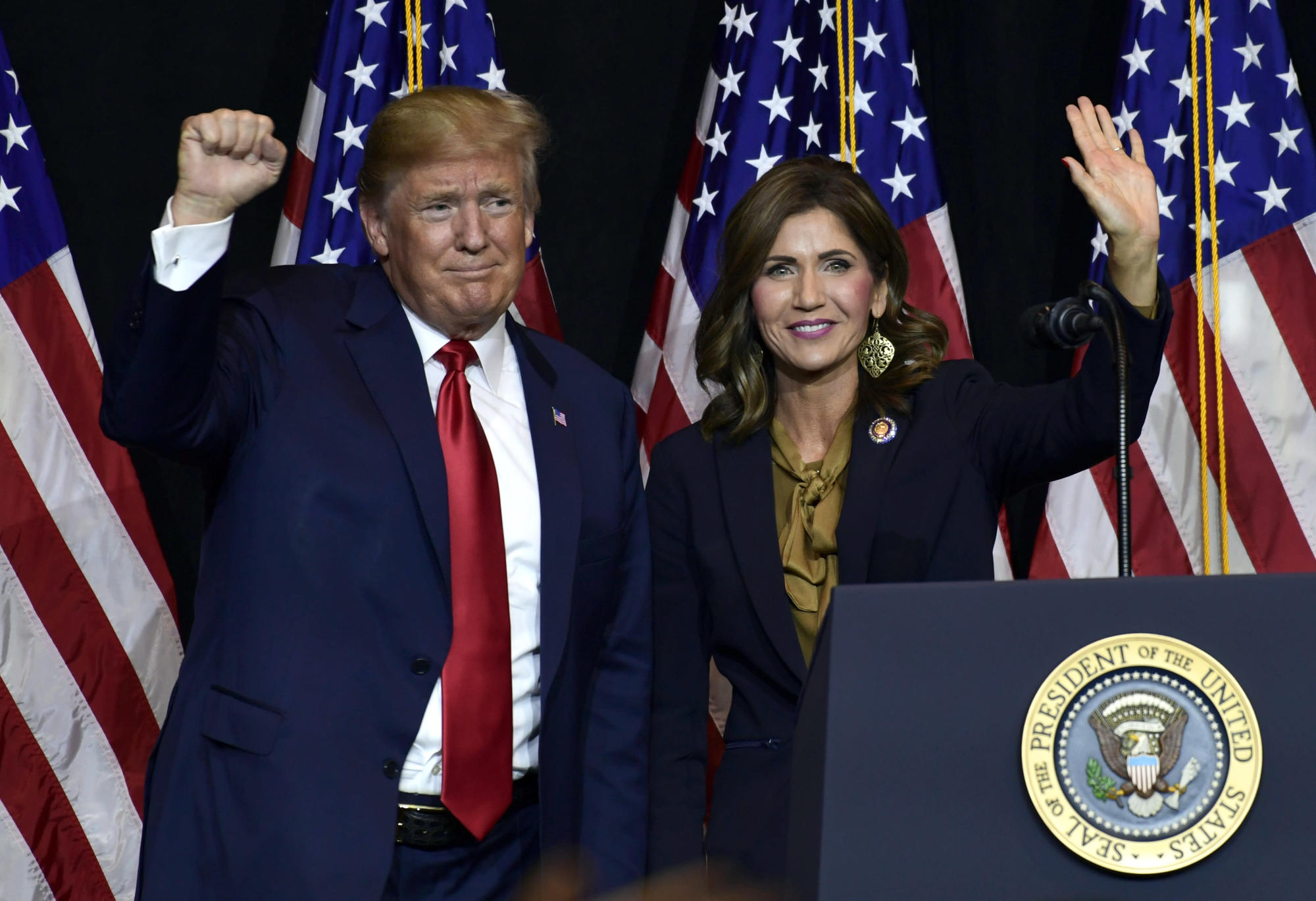 SIOUX FALLS, S.D. (AP) — South Dakota Gov. Kristi Noem catapulted onto the list of conservative politicians favored by former President Donald Trump with her libertarian approach to the pandemic. With the virus waning, she may be seeking to stay there by picking some legal fights sure to please the right.In recent weeks, Noem has gone to court to challenge President Joe Biden’s administration for blocking an Independence Day celebration with fireworks at Mount Rushmore. She also joined a lawsuit from several states against the administration over climate change regulations — one of the only plaintiffs who doesn’t hail from a state heavily dependent on fossil fuels.Noem says she’s simply acting in the state’s interests, but the tactic has given her a chance to cast herself as one of Biden’s most prominent foes. She went on Fox News to announce the lawsuit over Mount Rushmore fireworks, and later joined star host Sean Hannity for a podcast titled “Noem vs. Biden.”Noem told Hannity the only way “to get fairness on this issue” was to sue the Biden administration, and cast it as a fight not just for South Dakota but also for “our nation and the ability to celebrate our independence the way that our founders encouraged us to.”Instead of entrusting her attorney general with the lawsuits, Noem has filed them herself by tapping a state legal fund that has historically been used to defend against lawsuits, not launch them. Noem is taking a role usually played by the attorney general — she is the only governor to be listed alongside attorneys general from nine other states in the climate regulations lawsuit. In the Mount Rushmore lawsuit, Noem has the backing of Republican attorneys general from 16 other states.By taking the lead on the state’s legal matters, Noem has entered a see-sawing legal battle that has played out in recent years between the president in power and states controlled by the opposing party. Members of both parties, from California Democratic Gov. Gavin Newsom to Florida Republican Gov. Ron DeSantis, have used a legal strategy to seize on national hot-button issues.Story continuesBut launching lawsuits from the governor’s office is a new strategy for Noem — and one that has drawn criticism from some other South Dakota Republicans.State Rep. Steve Haugaard, a former House speaker who has sparred with the governor, gave the Mount Rushmore lawsuit little chance of prevailing in court. The National Park Service, which controls the monument, cited the possible fire danger and objections from local Native American tribes for denying the state’s application to hold fireworks this year.“When the outcome is a foregone conclusion, then there is a better use for those funds,” he said, adding that state “resources shouldn’t be used for personal attention.”Noem hired a Washington-area law firm, Consovoy McCarthy, best known for representing Trump in fending off efforts to investigate his financial records. Noem spokesman Ian Fury said the firm was chosen for its “expertise.” Its contract is capped at $150,000, with the state paying $600 an hour for partners and $450 an hour for associates, according to Fury. He said the legal costs of joining the multistate lawsuit over Biden’s climate change order should be “minimal.”Fury explained Noem filed the Rushmore lawsuit herself because she’s the one who has pushed to return the fireworks celebration to Mount Rushmore. The administration has noted that the monument is a huge draw for the state’s tourism industry, which is South Dakota’s second-largest job provider.Noem found an ally last year in then-President Trump, who cleared the way for fireworks at Rushmore despite longstanding concerns about fire danger. Trump joined Noem for a July 3 event that netted Noem pictures alongside the president, as well as a seat with him on Air Force One after the event.Trey Jones, a business consultant in Sioux Falls and a Republican, said he had no problem with Noem’s lawsuit, citing the importance of the monument.“A decision’s been made that is objectively bad for my state,” Jones said of the government blocking fireworks.Paul Nolette, a Marquette University political science professor who studies attorneys general, said it’s unusual for a governor to represent a state in lawsuits against the federal government. He attributed the move to Noem’s national ambitions — but also a rift with the state’s GOP attorney general, Jason Ravnsborg, who has been charged in a crash that killed a pedestrian last year.Noem called for Ravnsborg to resign. He refused, saying he can still carry out the duties of his office. But he has kept a low profile.Noem has made it clear she won’t be hindered by the attorney general’s reticence. Courting a national profile is a priority for Noem, who became a frequent Fox News guest in the past year in part due to a hands-off approach to managing the coronavirus pandemic without requiring masks or imposing any significant restrictions. Noem has also traveled the country to appear at political fundraisers and at conservative events such as CPAC, and also campaigned as a surrogate for Trump and for the GOP Senate candidates who ultimately lost critical runoff elections in Georgia earlier this year.Even some South Dakotans who enjoyed the Mount Rushmore fireworks said they would be watching to see if Noem’s lawsuit holds up to judicial scrutiny.Linda Johnson, an independent voter from Sioux Falls who considers herself “fiscally conservative,” didn’t take issue with Noem fighting for the fireworks, but she also cautioned the governor.“She has to own the consequences of every battle that she is taking the taxpayers into,” she said.