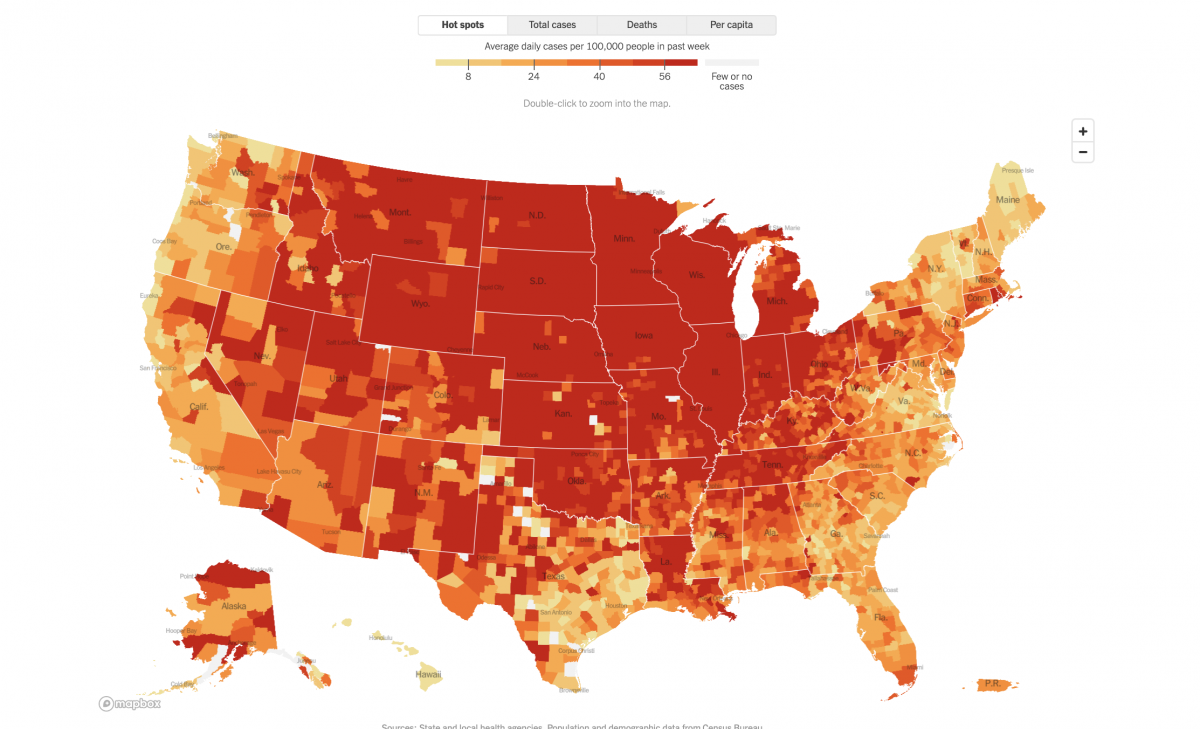 First Response
One of the reasons why I know nothing and you should close this newsletter is that I was convinced that the election would turn out badly for the Republicans because of their coronavirus performance. At the least I figured late deciders would move to the Democrats, given the generally crappy nature of 2020 weighing on their decision. It appears now that the late vote moved to Trump, and Republicans paid no price for backing him. In fact, in areas with the biggest COVID spikes, Republicans made gains.
The GOP is proud of this performance, at least on political terms. It appears to have come down to the residual CARES Act help covering just long enough to make people feel OK about their economic position; emphasizing “personal responsibility” to nationalize normal public health measures like mask mandates; and smearing Democrats as poised to lock down the economy and ruin people’s lives. Key to the final point is delaying the passage of any measure that would give people economic security. Warning about lockdowns doesn’t make any sense if people are covered with financial support. (So much for Nancy Pelosi being the barrier to a stimulus deal.)
I don’t know if this swung undecided voters in the middle, but it certainly played on ancient (and narrow) conservative notions of “freedom” and turned out the base. But it concerned the hell out of me. If Republicans took validation in their laissez-faire approach, then when the virus got really out of control—like right now—they wouldn’t do anything about it, and an untold number of people would die for their political strategy.
That’s certainly how the Trump administration is proceeding, though it’s probably not because of ideology and more distractedness, sloth, and incompetence. But my fears that Republicans all over the country would get the go-ahead to abandon their populations in an hour of need have subsided. With that, Republicans are showing the true cynicism of their political strategy, as they’re implementing precisely what they savaged Democrats for preparing to do.
Predictably, the new wave of restrictions started on the Democratic side. Chicago issued a stay-at-home advisory last week, encouraging the cancellation of Thanksgiving plans. Oregon and New Mexico ordered two-week lockdowns; there’s a travel advisory across the West Coast; New York, New Jersey and Virginia put in business restrictions and curfews. Michigan Governor Gretchen Whitmer imposed a partial lockdown, and endured crackpot Trump adviser Scott Atlas telling residents to “rise up” against her, even as the memory of a foiled kidnapping plot still lingered.
But Maryland’s Republican governor also reduced indoor dining capacity. Granted he’s an East Coast moderate, but in the states where the virus is truly raging, Republican leaders have some notion of protecting the public, amazingly enough. Iowa Governor Kim Reynolds, who had been resisting really any public health measures throughout the crisis, on Monday instituted a mask mandate, which is now in effect in 37 states, including conservative ones like Utah, Arkansas, Alabama, West Virginia and North Dakota. Doug Burgum, the governor of North Dakota, Doug Burgum, said in an announcement of a mask mandate and limits on gatherings: “Our situation has changed, and we must change with it.”
It’s sad that it took the virus being literally everywhere to get through to some Republicans. The harms from their politically expedient attitude are already baked in; there’s a very real sense that it’s too late for many. And even at this late date, some are resisting doing anything to protect people. South Dakota Governor Kristi Noem, who appears to think she’s going to run for president, has vowed to resist any enforcement of mask mandates or other restrictions from a Biden administration. There’s a sense that South Dakota will soon consist of like three people shouting amid a sea of bodies “At least I know I’m free!”
Let’s not let Democrats completely off the hook. California Governor Gavin Newsom just announced a bunch of new restrictions, but only after taking heat for personally attending a dinner with his wife for a lobbyist friend at the ritzy French Laundry. State lawmakers are at a retreat in Maui with other lobbyists. It would be hard to more deeply undermine moral authority than the Golden State’s political class. (Let’s throw in Nancy Pelosi’s scheduling a gala dinner in the Capitol for freshman House members. It was eventually cancelled.)
There’s a lot of lack of leadership to go around, in other words. And part of it is the human condition of wanting contact and companionship. The positive news on vaccines should offer hope that there’s an end date for all of this if we just stick it out a little longer. But that’s not quite how the human mind operates. While it’s good that America is taking the common path of exhausting all other possibilities before doing the right thing, it comes only after the virus has managed to burrow into every nook of the country. I’m satisfied that we’ve turned the corner, but the corner has been upon us for weeks.
You can now visit dayoneagenda.org for access to all of our articles on executive action in the next administration. I have a new one today on how the coronavirus crisis actually gives Joe Biden the opportunity to issue everyone Medicare. (He won’t, but it shows how creative his team needs to be thinking.)
Days Without a Bailout Oversight Chair
235.
Today I Learned