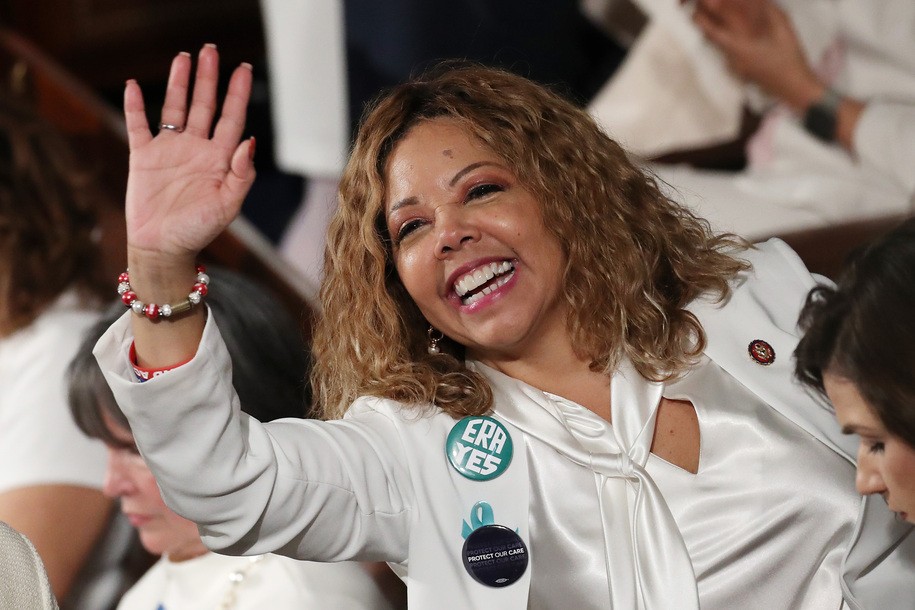 Perhaps most importantly, though, surveys also show Donald Trump in considerably worse shape in South Carolina four years after he carried it by a wide 55-41 margin: FiveThirtyEight’s polling average currently shows him ahead just 50-44 there. It would still be a massive surprise if Joe Biden carried the Palmetto State, but the better he does, the fewer crossover voters Harrison will need to defeat Graham.

Graham has the far easier path to victory in this conservative state, and Harrison needs almost everything to go right to pull off an upset, including many factors beyond his control. However, the GOP’s continued decline even in red states like this gives the well-funded Harrison an opportunity that South Carolina Democrats haven’t enjoyed in ages.

• GA-06 (Tossup to Lean D): Democrat Lucy McBath narrowly unseated Republican Karen Handel in a major 2018 upset, but now the new incumbent has the advantage for their rematch. The GOP brand has only declined in well-educated suburban seats like this one over the last two years, and McBath ended June with more than three times as much money in the bank as Handel.

Even Handel’s allies agree that McBath has gotten stronger as the cycle has continued. Earlier this month, the National Republican Congressional Committee publicized a poll that showed McBath ahead 48-46, which actually represented a decline for Handel, whom the same pollster found leading 49-47 in April. This district is still competitive enough for Handel to win, but the prevailing winds are against her.

• IN-05 (Lean R to Tossup): Like so many other affluent and well-educated suburban areas, Indiana’s 5th Congressional District has shifted sharply to the left in recent years: After voting for Donald Trump 53-41 in 2016, it supported Democratic Sen. Joe Donnelly 48.4-47.9 in 2018, and last year, Democrats performed very well in local elections. A late June poll for Democrat Christina Hale, a former state representative, showed the trend continuing, with Joe Biden leading Trump 53-43.

The seat, sited in the Indianapolis suburbs, became considerably harder for Republicans to defend when Rep. Susan Brooks, one of the few women in the House GOP caucus, chose to retire a year ago. To succeed her, Republicans nominated a sub-par candidate, state Sen. Victoria Spartz, whom Inside Elections said was so “stridently conservative” that she wound up with “very few allies in Indianapolis, even among Republicans.” Hale’s poll found her beating Spartz 51-45, and while Spartz’s allies at the Club for Growth finally just responded with their own survey showing the Republican up 47-40, they rather tellingly did not include any numbers for the presidential race.

At this point, we simply wouldn’t be surprised if Hale succeeded in flipping the 5th District despite its ancestrally Republican roots.

• NE-02 (Lean R to Tossup): National Democrats made a mistake in writing off nonprofit executive Kara Eastman in 2018, who wound up losing to Republican Rep. Don Bacon just 51-49, but they won’t make the same error this year. A pair of Democratic polls taken in the spring and early summer showed a very tight rematch between the two candidates, but most importantly, they also found Joe Biden up by seven and then 11 points. Republicans never answered with contradictory numbers of their own.

It’s a familiar story: Nebraska’s 2nd Congressional District, centered around the city of Omaha, includes historically Republican suburban areas that have turned on Donald Trump, who won here 48-46 four years ago. Bacon, a retired Air Force brigadier general, is one of the GOP’s more formidable incumbents, but Eastman has turned into a strong fundraiser and won’t lack the resources she needs this time.

• NY-02 (Lean R to Tossup): This seat along the South Shore of Long Island backed Trump by a solid 53-44 margin and it remains conservative turf, especially further down the ballot, but Democrat Jackie Gordon is running a well-funded campaign to flip it. The same cannot be said for Republican Andrew Garbarino, who ended June with a $1.1 million to $104,000 cash-on-hand deficit.

No one has released any polling here, but we do have one solid indication that the GOP is worried: The conservative Congressional Leadership Fund recently announced that it was reserving $1.9 million to defend this open seat. If Republicans fail to hang on, we won’t be surprised.

• OH-10 (Safe R to Likely R): Veteran Republican Rep. Mike Turner has always pulled off decisive wins in this Dayton-based seat that supported Trump 51-44, but he could be vulnerable in a bad political climate against a strong opponent. There are also some indications that Turner isn’t taking his contest for a 10th term as seriously as he should.

Democrat Desiree Tims raised a notable $381,000 during the second quarter while Turner took in just $77,000—the most obvious sign that he may be sleepwalking—and he ended June with an unimpressive $577,000 to $336,000 cash-on-hand lead. It would be a very big deal if Turner were to lose two years after he turned back a credible opponent 56-42, but this district should be competitive enough at the presidential level to make this contest worth watching.

• TX-03 (Safe R to Likely R): While Texas’ 3rd Congressional District isn’t among the top tier of targets for Lone Star State Democrats this year, it carries the unusual distinction of having the highest proportion of college degree holders of any seat in the country that the GOP still holds. The trends are favorable for Democrats, too, as the 3rd moved from 64-34 Romney to a smaller 55-41 Trump, and Ted Cruz only carried it 51-48 last cycle.

Attorney Lulu Seikaly, who is the daughter of Lebanese immigrants and would be the first woman of color to represent this suburban Dallas district, is still the heavy underdog to freshman Republican Rep. Van Taylor. But even Taylor’s own new polling, which put him up 48-35 and, predictably, didn’t include presidential numbers, suggests he’s not a lock. We saw unexpectedly close margins in a number of House races in Texas last year, and this is the sort of turf that could surprise us if Democrats enjoy a landslide.

• TX-21 (Lean R to Tossup): Like so many other congressional districts in various Texas suburbs, the 21st has charged toward Democrats over the past decade. Despite the extreme Republican gerrymander that sutures Austin and San Antonio together with the Hill Country, the collapse has been particularly swift here: Mitt Romney carried the district 60-38 in 2012, followed by a 52-42 win for Donald Trump in 2016, and then a 49.6 to 49.5 squeaker for Ted Cruz in 2018. A mid-July poll for Democrat Wendy Davis found Joe Biden up 50-47 and freshman GOP Rep. Chip Roy ahead just 46-45. As usual this cycle, Republicans have not responded with any different results.

Roy, a former Cruz chief of staff and a member of the nihilist House Freedom Caucus, hasn’t seemed to grasp the changes that are taking place around him and remains a strident Trump ally. Davis, meanwhile, has capitalized on the high profile she brought into the race and become one of the party’s best fundraisers this cycle. And though she famously lost her 2014 gubernatorial bid in a landslide, her ability to win Republican turf when she served in the state Senate should not be overlooked: In 2012, she won reelection despite the fact that her district went 53-45 for Romney on the very same day.

• TX-25 (Safe R to Likely R): Stop us if you’ve heard this one before: Another rock-ribbed Republican district in Texas has edged its way into competitive territory, thanks to the same gyrations that have shaken the GOP nationwide under Trump. To see Texas’ 25th do so, however, is as surprising as it gets, but here we are. A recent in-house poll for the Democratic Congressional Campaign Committee, which seemed to astonish the committee itself, found Joe Biden edging out Donald Trump 47-46 and gave Republican Rep. Roger Williams just a 45-43 lead on Democrat Julie Oliver, an attorney. If Republicans have polling that paints a different picture, they haven’t shared it.

Just four years ago, Williams’ district, which is part of a brutal GOP gerrymander that dismembered the state capital of Austin six ways, went for Trump by a wide 55-40 margin. It’s moved toward Democrats, but Ted Cruz still won it 52-47 in 2018—and believe it or not, there are nine other Republican-held districts where Cruz did worse. And though Oliver has raised a creditable sum for an under-the-radar race, Williams maintains a huge cash advantage. Nevertheless, it’s worth keeping an eye on this one.