A Long Fight in the US

Voting Rights Act of 1965 – US Department of Justice

The murder of voting-rights activists in Philadelphia, Mississippi, gained national attention, along with numerous other acts of violence and terrorism. Finally, the …

VOTING RIGHTS ACT – MAJOR DATES IN HISTORY. The Voting Rights Act is a historic civil rights law that is meant to ensure that the right to vote is not denied…

The Right to Vote: The Contested History of Democracy in the United …

The Right to Vote: The Contested History of Democracy in the United States [ Alexander Keyssar] on Amazon.com. *FREE* shipping on qualifying offers.

Voting rights in the United States – Wikipedia, the free encyclopedia 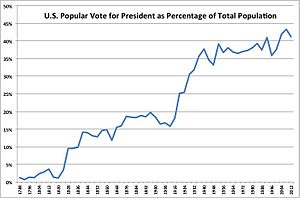 The 1965 Voting Rights Act was a natural follow on to the 1964 Civil Rights Act. Ironically, the 1964 Act had resulted in an outbreak of violence in the South.

Voting rights and the Supreme Court: The impossible literacy test …

28 Jun 2013 … Holder overturned Section 4(b) of the 1965 Voting Rights Act, which … of changes in voting procedure in jurisdictions that have a history of …

Introduction To Federal Voting Rights Laws – US Department of Justice

Voting Rights Act, U.S. legislation (August 6, 1965) that aimed to overcome legal … among the most far-reaching pieces of civil rights legislation in U.S. history.

The Fight to Vote | Spotlight | BillMoyers.com

The Long Assault on Our Voting Rights … John Oliver considers the voting rights of the citizens of the American territories. … After a surge in voting participation among African-Americans and other groups in 2008, many states enacted new …

For King, the right to vote was sacred – CNN.com

15 Jan 2012 … Donna Brazile says the right that Martin Luther King held sacred — the … in the 1960s finally secured voting rights for African Americans, Brazile … seems particularly worthy of remembrance: the fight for the ballot. … “So long as I do not firmly and irrevocably possess the right to vote I do not possess myself.

Three years ago, the Supreme Court handed down a crushing ruling in the landmark case Shelby v. Holder (pdf). For reasons still mostly unclear to me (Chief Justice John Roberts partially opined that key provisions of the Voting Rights Act were “extraordinary measures” no longer needed because America’s legacy on race “had changed”), Section 5 of the VRA was essentially gutted, leaving voters in many states with the most sordid history of voter disenfranchisement vulnerable to further abuses without any protection.

In the 12 months following Shelby, the threat that loomed from the decision had already become actualized.

Almost before the ink on the decision had fully dried, Texas instituted strict voter-ID laws that had been previously blocked by Section 5 because of the disparate impact such laws had with regard to race.

Both Alabama and Mississippi also began enforcing strict and prohibitive voter-ID restrictions that would have required preclearance review under Section 5. Similarly, North Carolina—another state that was subject to pre-Shelby protections under Section 5—also passed voter-ID laws as well as reduced voter-registration periods and early voting.

The issue, however, isn’t just these laws on their own, but how they act in tandem with other legislation and policy initiatives (purging voter rolls, for example) that are most disastrous.

For as much as pre-empting the effects of Shelby through action via local and state legislatures might have seemed a worthwhile tactic, that was always more viable in theory than in practice. Most of the states subject to Section 5 are conservative in nature, and so the idea that progressive measures intended to ensure the voting rights of a mostly liberal demographic in these areas would be welcome is a lofty, if not altogether naive, idea.

The truth is, we are never going back to fix the VRA in the foreseeable future. While the federal legislature could act to restore it at whatever point(s) and to whatever degree(s) it saw fit, given the virtual stalemate of this Congress and no likely shift in party dominance for the foreseeable future, it will be ages before there is even a worthwhile voting-rights bill that reaches the floor for debate, much less a vote.

It is critically important at this juncture that we do not lose any further ground after Shelby. Beyond the fact that the case’s aftermath could theoretically be the GOP’s Trump card (sorry, I just couldn’t resist) in the presidential race, the immediate ramifications of the decision threaten to wreak havoc in local elections. Most of the changes that would have been prohibited through Section 5 were for elections that operated below the state level, marginalizing voters (many of them people of color) out of having a voice in local elections (think Ferguson, Mo., City Council, before you knew where Ferguson was).

To weather this storm without further casualty, our community must commit itself toward being steadfast and vigilant. First, we absolutely must re-engage the strategy of grassroots voter-registration drives. Sounds old school, but the effort must be doubled because the finish line has been moved, and the hurdles raised. There is hardly any argument that this is fair; it is the unfortunate result of having a Supreme Court where privilege blinds those in power to the realities of race in modern-day America. But organizing car pools to voter-ID sites and/or to the polls on Election Day are real examples of the extra measures we must be prepared to take to keep the stake we have in certain states.

Second, we have to remain engaged in the fight. Shelby took away the protection of preclearance review for changes to voting laws, but that does not mean every law that legislators enact—or even how those laws are implemented—is legal. That’s of critical importance. While these cases are undoubtedly more expensive to litigate than before, we must be willing to go the distance and challenge new laws in the courts.

Finally, when we do get to the polls (and get there we must), we must insist on electing legislators who have openly come out in support of protecting voters’ rights. For all of the election issues that may cycle in and out depending on the year, this is one that must remain a priority for our community until the threat of voter disenfranchisement is no more.

If the years since Shelby are any indication, things threaten to get a lot worse before they get better. Lawmakers are definitely “trying it,” and we must continue to let them know we aren’t here for the shenanigans. Not today, or tomorrow. Our fight is not over, and we owe it to generations both before and after our own to remain engaged.