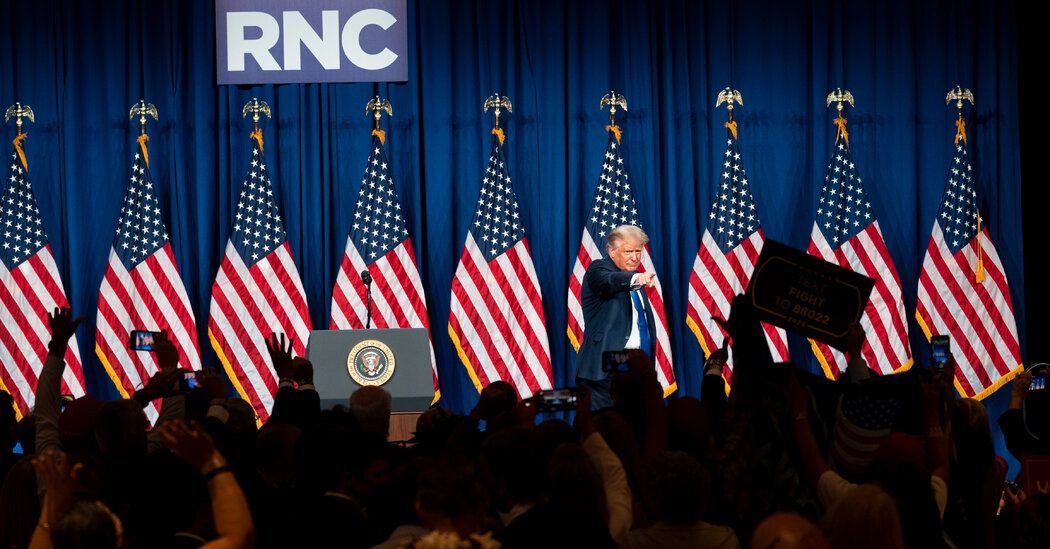 “Democrats started their convention last week with Eva Longoria, a famous Hollywood actress who played a housewife on TV. Well, I’m actually a real housewife and a mom from Michigan with two wonderful kids in public school who happens to be the only — only the second woman in 164 years to run the Republican Party. Four years ago, President Trump started a movement unlike any other. And over the next four days, we will hear from a few of the millions of hardworking everyday Americans who have benefited from his leadership.” “Florida —” “Georgia —” “Guam —” “Indiana —” “Iowa —” “Kansas —” “Kentucky —” “Tennessee —” “Texas!” “— are excited to nominate —” “— Donald J. Trump —” “— and Vice President Mike Pence —” ”— for four more years.” “Thank you for all you’ve done.” “He’s taken on the swamp, all of the swamp — the Democrats, the press and the Never Trumpers. And when you take on the swamp, the swamp fights back.” “This election is a battle for the soul of America. Your choice is clear: Do you support the cancel culture, the cosmopolitan elites of Nancy Pelosi, Chuck Schumer and Joe Biden, who blame America first? Do you think America is to blame? Or do you believe in American greatness? Ladies and gentlemen, leaders and fighters for freedom and liberty and the American dream, the best is yet to come!” “I am the proud daughter of Indian immigrants. They came to America and settled in a small Southern town. My father wore a turban. My mother wore a sari. I was a brown girl in a black and white world. We faced discrimination and hardship, but my parents never gave in to grievance and hate. My mom built a successful business. My dad taught 30 years at a historically black college. And the people of South Carolina chose me as their first minority and first female governor. America is a story that’s a work in progress. Now is the time to build on that progress and make America even freer, fairer and better for everyone. That’s why it’s so tragic to see so much of the Democratic Party turning a blind eye towards riots and rage. The American people know we can do better. America isn’t perfect, but the principles we hold dear are perfect. If there’s one thing I’ve learned, it’s that even on our worst day we are blessed to live in America.” “Our founders believed there was nothing more important than protecting our God-given right to think for ourselves. Now the left, they’re trying to cancel all of those founders. They don’t seem to understand this important principle: In order to improve in the future, we must learn from our past, not erase it. So we’re not going to tear down monuments and forget the people who built our great nation. Instead, we will learn from our past so we don’t repeat any mistakes.” “We don’t give in to cancel culture or the radical and factually baseless belief that things are worse today than in the 1860s or the 1960s. We have work to do. But I believe in the goodness of America, the promise that all men and all women are created equal. Our side is working on policy while Joe Biden’s radical Democrats are trying to permanently transform what it means to be an American. Make no mistake: Joe Biden and Kamala Harris want a cultural revolution, a fundamentally different America. If we let them, they will turn our country into a socialist utopia. And history has taught us that path only leads to pain and misery, especially for hard-working people hoping to rise. Instead, we must focus on the promise of the American journey.”