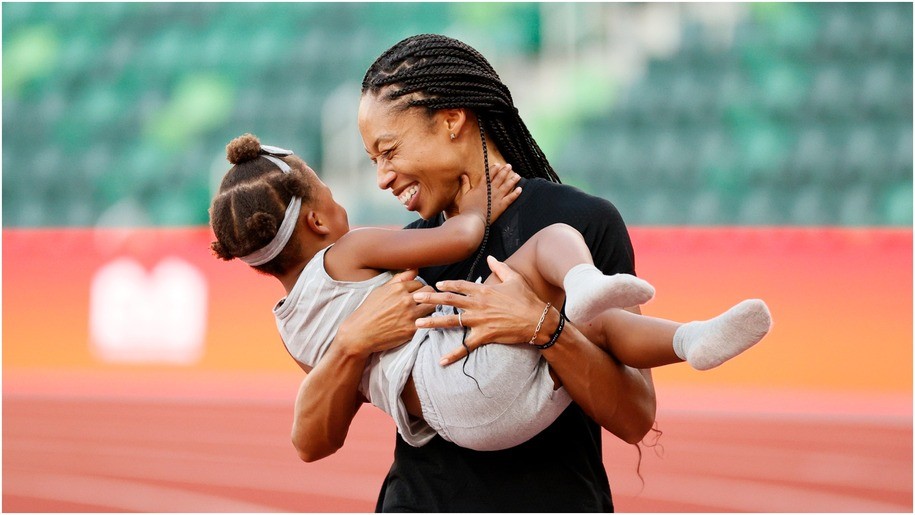 “I felt pressure to return to form as soon as possible after the birth of my daughter in November 2018, even though I ultimately had to undergo an emergency C-section at 32 weeks because of severe pre-eclampsia that threatened the lives of me and my baby,” she wrote. At the time, she was negotiating a new contract with the company.

“Despite all my victories, Nike wanted to pay me 70 percent less than before,” Felix wrote. “If that’s what they think I’m worth now, I accept that. What I’m not willing to accept is the enduring status quo around maternity. I asked Nike to contractually guarantee that I wouldn’t be punished if I didn’t perform at my best in the months surrounding childbirth.

“I wanted to set a new standard. If I, one of Nike’s most widely marketed athletes, couldn’t secure these protections, who could? Nike declined.”

“Athletes are told to shut up and play,” Felix wrote for The New York Times. “We are told that no one cares about our politics. We are told that we’re just entertainers, so run fast, jump high, and throw far. And don’t mess up.

”But pregnancy is not messing up; for women it can and should be able to be part of a thriving professional athletic career, as my teammates have shown and I hope to show too. ”

After Felix’s story and those of her Olympic teammates Alysia Montaño and Kara Goucher, who earlier broke nondisclosure agreements with Nike to report that the company cut their pay after becoming pregnant, Nike changed its maternity policy. The company expanded the timeline of it guaranteed pay and bonuses to pregnant athletes from 12 months to 18 in 2019, The Washington Post reported. Both time periods amount to the kind of guarantee many Americans are still fighting for.

xPAID FAMILY LEAVE: President Biden is including 12 weeks of paid family leave in his American Families Plan, saying no one should have to choose between a paycheck and caring for your family pic.twitter.com/AjImGrOLTr— Forbes (@Forbes) July 7, 2021

President Joe Biden proposed as part of his $1.8 trillion spending and tax credit plan intended to restore the country to financial health after the coronavirus pandemic a guaranteed 12 weeks of paid leave for federal workers. The plan would cost about $225 billion over a 10-year time period and be paid for by taxing the wealthy, CNBC reported. “This new benefit, provided by the federal government, will ensure workers partial wage replacement to take time to bond with a new child; care for a seriously ill loved one; deal with a loved one’s military deployment; find safety from sexual assault, stalking, or domestic violence; heal from their own serious illness; or take time to deal with the death of a loved one,” the White House said in a fact sheet from April.

Felix, who started the Saysh lifestyle brand by and for women, said in the caption of an Instagram post last month:

”I never would have thought that using my voice would have led to NIKE changing their maternity policy for athletes and I definitely never would have thought it would lead to creating @bysaysh. Keep going and keep speaking up, even if your voice shakes. Thank you, thank you, thank you for your support in my journey on the track and now with my company. The outpouring of love has been overwhelming. I’m so full of gratitude.•Please be clear. I used my voice and built this company for you. So that you never have to train at 4:30am while you’re 5 months pregnant to hide your pregnancy from your sponsor. So that you won’t have to fight someone so much bigger than you for a right that should be basic. I took that on for you, and I didn’t do it alone, but it was for you.•I built @bysaysh with @pwesley22 because we didn’t see what we thought the world needed. The world doesn’t need more shoes, but the world does need to see women wholly and meet them right where they are. That’s what we’re hoping to do with @bysaysh. We want women to feel seen and known. I hope I’m able to leave this sport better than I found it and this world better than when I entered it.”