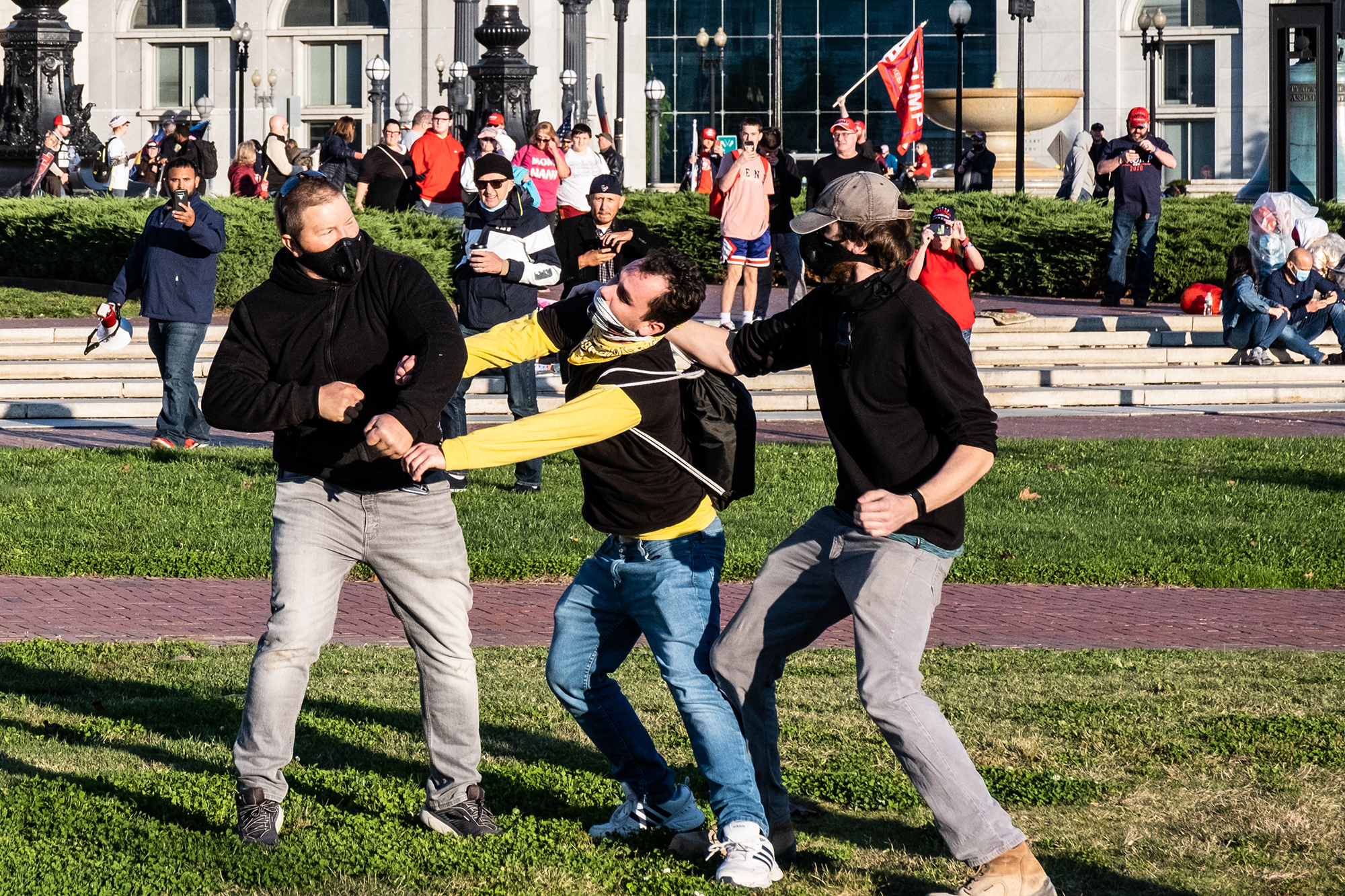 Conservatives accused the media of turning a blind eye to violent attacks against Trump supporters at Saturday’s “MAGA Million March” in Washington, DC.

“The President’s supporters have a right to peacefully rally supporting POTUS just like his opponents have that same right,” New York Rep. Lee Zeldin said on Twitter Saturday night.

“The physical assaults today by violent leftists targeting his supporters is abhorrent,” Zeldin said. “The near total media blackout of the violence is terrible…& telling.”

Thousands of Trump supporters gathered in the nation’s capital for the rally to show support for the president, who continues to contest his apparent loss in the election to former Vice President Joe Biden.

But counter-protesters converged on rally participants later in the day and into night, leading to violent clashes. Activists through bottles, fists and fireworks — and set MAGA hats alight, according to the Washington Post. Brawlers from both sides were seen going at it for several minutes at one intersection — leading to the stabbing of one man, the outlet said.

“The media’s near total silence about the physical violence being perpetrated against conservatives is shameful & dangerous,” tweeted Ivanka Trump, the president’s daughter and a White House adviser.

“Just image the outrage and indignation if this went the other way. Violence is never the answer and instigators must be condemned and prosecuted.”

Other conservatives called on President-elect Biden to condemn to violence.

“I want to hear @JoeBiden and @KamalaHarris condemn Antifa/BLM criminals who assaulted and harassed peaceful demonstrators in DC today, including elderly and families,” conservative political strategist Doug Stafford said in a Twitter post.

The skirmishes also drew a rebuke from Kelley Paul, the wife of Sen. Rand Paul of Kentucky, who in August was surrounded by a mob of protesters after leaving the Republican National Convention at the White House.

“Watching video of people being assaulted and mobbed by BLM / Antifa in DC tonight brings back awful memories,” Kelley Paul said on Twitter.

“Want an example of media bias?” she wrote. “When @RandPaul and I spoke out about our mob assault, the @AP reported our claim was ‘without evidence’ despite 10 minutes of video.”

Washington DC police said Sunday that 21 people were arrested, including on assault and weapons charges, and one man was stabbed. The department did not provide details on whether the suspects were Trump supporters or counter protesters.

Tags:attacks, conservatives, ignoring, media, supporters, trump
We use cookies on our website to give you the most relevant experience by remembering your preferences and repeat visits. By clicking “Accept All”, you consent to the use of ALL the cookies. However, you may visit "Cookie Settings" to provide a controlled consent.
Cookie SettingsAccept All
Manage consent