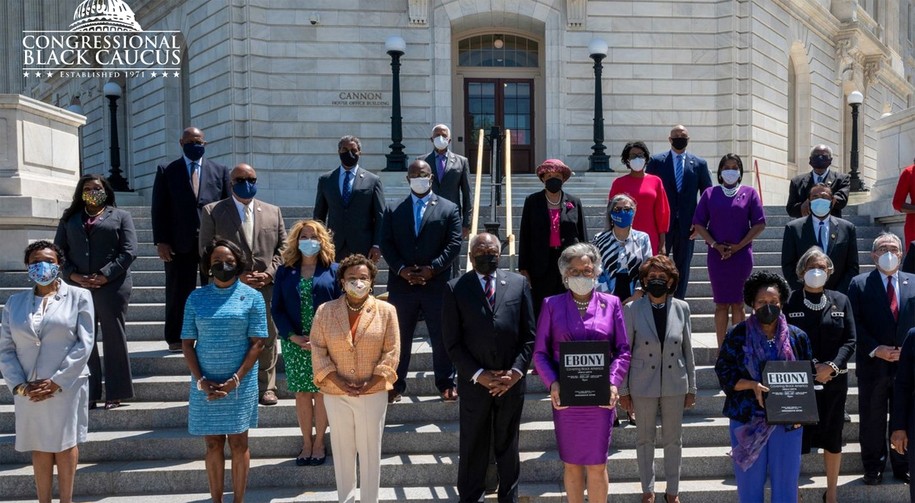 Joyce Marie Beatty serves as the U.S. Representative for Ohio’s 3rd congressional district. Since 2013, she has been in that position and more recently, she became the Chair of the Congressional Black Caucus in 2021.

The congresswoman opened the floor with reflection of what the Black community has overcome due to the focus and dedication led by movements and diplomacy fighting for human equality and justice. The Chairwoman of the Congressional Black Caucus also emphasized the continual work that needs to be done.

Beatty mentioned that June 30 marks the 50th anniversary of the CBC, stating, “For 50 years, the Congressional Black Caucus has fought for and on behalf of Black people and the communities we serve. Just as freedom fighters took to the dark roads in the dead of the night to call for an end to racism, for the right to vote—we continue to stand committed to the work ahead of us.”

Rep. Beatty herself shared the story.

There were no Black men in Congress after 1901, until the election of Oscar Stanton De Priest from Illinois, as the first non-Southern Black House representative. He took office on March 4, 1929. Across the Capitol, there was an 80-year gap with zero Black senators, until Massachusetts’ Edward Brooke took office in 1967. It wasn’t until  January 3, 1969, that the first Black woman, Shirley Chisholm, was sworn into a House seat. Not long thereafter, in 1971, the Congressional Black Caucus (CBC) was formed, with the motto, coined by Rep. William (Bill) Clay of Missouri, “Black people have no permanent friends, no permanent enemies … just permanent interests.”

I have had an interest in some of the founders of the Congressional Black Caucus for some time, notably Ron Dellums, who was a founder of the Progressive Caucus, and whose election as a Democratic socialist was engineered with the help of the Black Panther Party; Congressman John Conyers did a jazz radio show on my radio station in Washington, D.C.;  and Shirley Chisholm, who is one of my shero inspirations. But it wasn’t until I started doing twice-weekly roundups of CBC member’ activities for Black Kos that I realized that far too often, not much mainstream media attention is paid to these Black folks we have managed to get elected.

Two years ago, I covered some CBC history, noting that the Caucus was expanding in both “size and clout.”

The history, courtesy of the CBC’s own House.gov page:

During the late 1960s, Rep. Charles Diggs (D-Mich.) created the Democracy Select Committee (DSC) in an effort to bring black members of Congress together. Diggs noticed that he and other African-American members of Congress often felt isolated because there were very few of them in Congress and wanted to create a forum where they could discuss common political challenges and interests.“The sooner we get organized for group action, the more effective we can become,” Diggs said.The DSC was an informal group that held irregular meetings and had no independent staff or budget but that changed a few years later. As a result of court-ordered redistricting, one of several victories of the Civil Rights Movement, the number of African-American members of Congress rose from nine to 13, the largest ever at the time, and members of the DSC decided at the beginning of the 92nd Congress (1971-1973) that a more formal group was needed. “The thrust of our elections was that many black people around America who had formerly been unrepresented, now felt that the nine black members of the House owed them the obligation of also affording them representation in the House,” Rep. Louis Stokes (D-Ohio) said. “In addition to representing our individual districts, we had to assume the onerous burden of acting as congressman-at-large for unrepresented people around America.”

The Congressional Black Caucus (CBC) was established in 1971 by 13 founding members.

Shortly after the CBC was established, its battle with President Nixon began. After President Nixon refused to meet with the group, the CBC decided to boycott the 1971 State of the Union Address, which made national headlines. “We now refuse to be part of your audience,” Rep. William Lacy Clay, Sr. (D-Mo.) wrote to President Nixon on behalf of the caucus, explaining that President Nixon’s refusal to meet with the caucus was evidence that the Administration wasn’t interested in helping the African American community.  The CBC’s decision to fight its battle with President Nixon publicly worked in the caucus’ favor and became a strategy the CBC would return to again and again. President Nixon eventually agreed to a March 1971 meeting with the caucus. During the meeting, the CBC presented President Nixon with 61 recommendations to eradicate racism, provide quality housing for African-American families, and promote the full engagement of African-Americans in government. “Our people are no longer asking for equality as a rhetorical promise,” Diggs said. “They are demanding from the national Administration, and from elected officials without regard to party affiliation, the only kind of equality that ultimately has any real meaning—equality of results.”Press coverage of the meeting and the events leading up to it introduced the CBC to the nation. A few years later, in 1973, the CBC would be among the first members of Congress to call for President Nixon’s impeachment.

CBS This Morning posted this historical overview of the CBC for Black History Month 2021.

What I’d like to stress today is that with voting rights under siege in multiple states, and the teaching of Black American history being excoriated from the right, we need to have the backs of Black folks, and their staff members we’ve put out front on the firing lines, who have to live and work with death threats.

We also need to be aware of what bills they are proposing, sponsoring, and cosponsoring—as well as the challenges they face in their home districts. Mainstream media attention gravitates toward clickbait and controversy. We need to counter that by stepping up our support.

How many CBC members do you follow on social media? How many have you donated to, who are not in your district or state? Here’s a link to the current members: How many do you know something about?

It’s beyond time to step up and have these members’ backs!