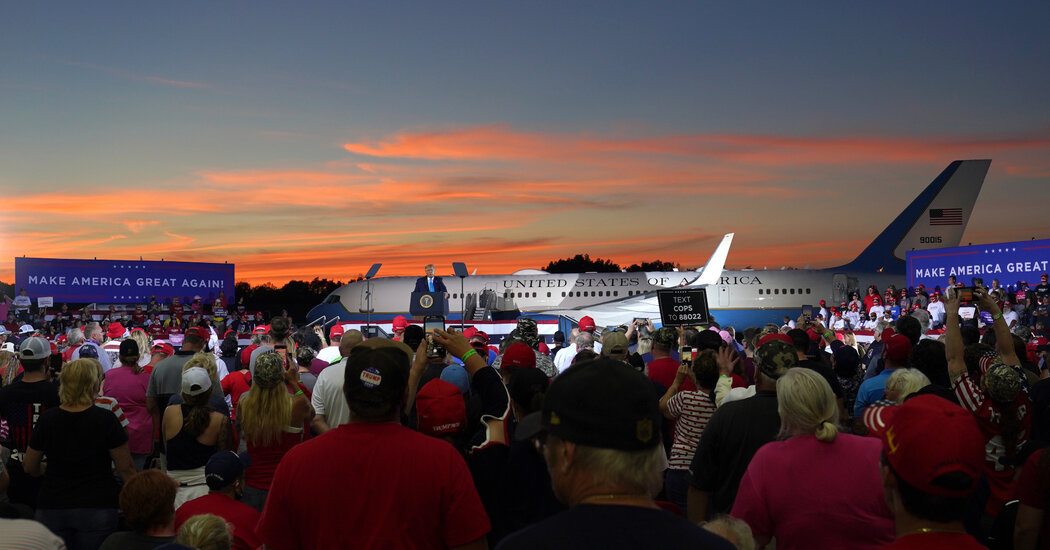 But in Latrobe on Thursday, the president treated the topic of Russia as little more than a political cudgel used by his opponents for partisan gain. He renewed his attacks on Representative Adam B. Schiff, Democrat of California, who led the House Intelligence Committee’s inquiry into a possible conspiracy between the Trump 2016 campaign and Russian officials.“These maniacs always talk about Russia. They never talk about China. It is always Russia. I heard it starting again,” Mr. Trump said. “They said somebody spoke to Russia two years ago, Russia, Russia, Russia. The total maniacs — Shifty Schiff is a total maniac. I can’t even listen.”He said when he hears people talking about Russia, “I just turn it off. It is crazy.”Mr. Trump made no mention of last month’s bipartisan Senate Intelligence Committee report detailing ties between his campaign in 2016 and Kremlin officials, including confirmation that a business partner in Ukraine of his campaign chairman, Paul Manafort, was a Russian intelligence agent. Nor did he address a new warning from the Department of Homeland Security on Thursday that Russians are trying to foment disinformation by amplifying unfounded claims of voter fraud.Mr. Trump has directly addressed Mr. Navalny’s case only once, saying in response to a reporter on Aug. 20 that “we’re looking at it,” and that Secretary of State Mike Pompeo would be “reporting to me soon.”Five days later, Mr. Pompeo issued a statement saying that if reports of a poisoning “prove accurate,” the United States would back “a comprehensive investigation” by the European Union and stood ready to assist. He added that “Mr. Navalny’s family and the Russian people deserve to see a full and transparent investigation carried out, and for those involved to be held accountable.”Michael Carpenter, a former top Russia official at the Pentagon and foreign policy adviser to Mr. Biden at the White House, said it was revealing that Mr. Trump had left the response to his subordinates. “In a well-established game, he has subordinates deep down in the bureaucracy like the N.S.C. spokesman issue a statement,” Mr. Carpenter said.But as in previous instances of Russian wrongdoing, Mr. Trump himself has not echoed their words.Mr. Trump has also not commented on a series of escalatory Russian military actions in recent days, including a late-August episode in northeastern Syria that left seven American troops injured after a Russian armored vehicle rammed theirs. And he has dismissed intelligence reports that Russia offered bounties to Taliban-affiliated fighters in Afghanistan for the killing of American troops there as “a hoax.”