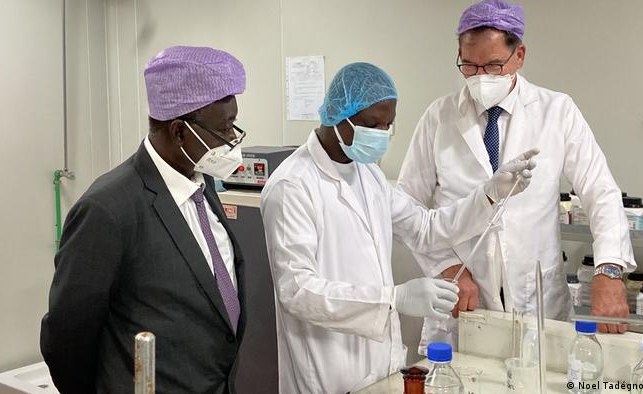 The rate of COVID-19 cases is rising in many parts of Africa, where governments face alarming shortages of funds and vaccines. German Development Minister Gerd Müller is getting a closer look.
German Development Minister Gerd Müller’s first stop on his weeklong tour of West Africa trip was Lome, the capital of the small country of Togo. As in all African countries, there is a shortage of vaccines and medical equipment. Müller came with a donation of 30 ventilators and more than 5,000 oximeters to help support the country’s efforts to combat COVID-19.
On his trip, which includes stops in Gambia, Sierra Leone and Senegal, Müller is hoping to gain a deeper insight into the social and economic impacts of the pandemic. He will also discuss the possibilities of producing vaccines in West Africa.
In Togo, he met pharmaceuticals representatives and visited factories. Germany has invested €142 million ($170 million) into the country’s agriculture, energy and education sectors. Togo’s economic growth fell from 5.5% to 1.8% in 2020 because of the pandemic. Still, Togo was able to contain the latest wave, in April, and daily reported infections are currently in the low double digits, according to the scientific online publication Our World in Data.

‘Worrying increase in cases and deaths’
The global drop in infection rates “masks a worrying increase in cases and deaths in many countries,” Tedros Adhanom Ghebreyesus, the director-general of the World Health Organization (WHO) told journalists this week. “The steep increase in Africa is especially concerning because it is the region with the least access to vaccines, diagnostics and oxygen,” he said.
Conflicts in Ethiopia, Mali and the Democratic Republic of the Congo are exacerbating the situation. In Uganda, in East Africa, the number of new daily cases has shot up in the past month and had reached 1,400 by June 15, according to Our World in Data.

Ugandan President Yoweri Museveni announced a strict lockdown on June 6. Under the measures, all schools and institutions of higher learning are closed for 42 days and all teachers must get fully vaccinated before they are allowed to return to work. Communal prayers in churches and mosques are also suspended for 42 days, as is public transport such as buses, taxis and boda boda motorcycle and bicycle service between and across districts.
In the neighboring Democratic Republic of the Congo, President Felix Tshisekedi warned of a “fatal third wave” and told people to be cautious, limiting gatherings to 20 people and shutting down nightclubs. According to the Africa Centres for Disease Control and Prevention (Africa CDC), more than 35,000 COVID-19 cases have been registered in the Democratic Republic of the Congo so far and 845 people have died. However, the numbers are rising at an alarming pace. “The situation is serious, our hospitals are overcrowded,” the president said, according to media reports.

The beginning of winter has increased the risk of infection in South Africa, where the number of cases has doubled in a short time, according to the WHO. On June 15, the country’s Health Ministry reported more than 8,400 new cases. There have been over 58,000 deaths so far.
Most states likely to miss vaccination targets
It is questionable whether vaccines can help in such a situation. According to Africa CDC, not even 1% of the African population has received both shots of the COVID-19 vaccine; yet South Africa is in the top third of African states when it comes to progress in inoculating the population.
The WHO fears that vaccination targets could be missed in most African countries, predicting that nine out of 10 will not manage to inoculate 10% of their populations by September. There is a shortage of 225 million vaccine doses.
“Cases are on the rise, we have exceeded over 5 million cases and 98% of the African continent remains unvaccinated,” said Thoko Elphick-Pooley, the director of Uniting to Combat Neglected Tropical Diseases, a collective of global health organizations.

At their recent summit, the G7 industrialized nations announced that they would provide more than 1 billion COVID-19 vaccine doses to poorer countries by the end of 2022. According to many NGOs, this is not enough.
Elphick-Pooley said that was an ambitious goal but lamented the fact that not enough effort had gone into working out the details: “The logistics of organizing communities for mass treatment, sending out community health workers, transporting drugs and recording data — the whole system costs money.”
The pandemic will also be high on the German development minister’s agenda during his visit to Freetown, the capital of Sierra Leone, where he is slated to seal a partnership between Berlin’s Charite hospital and the Princess Christian Hospital. He will also visit a health center in Gambia before wrapping up his week in the Senegalese capital, Dakar, where he will visit the Institut Pasteur, which is gearing up to produce COVID-19 vaccines for the region.
This article was translated from German.